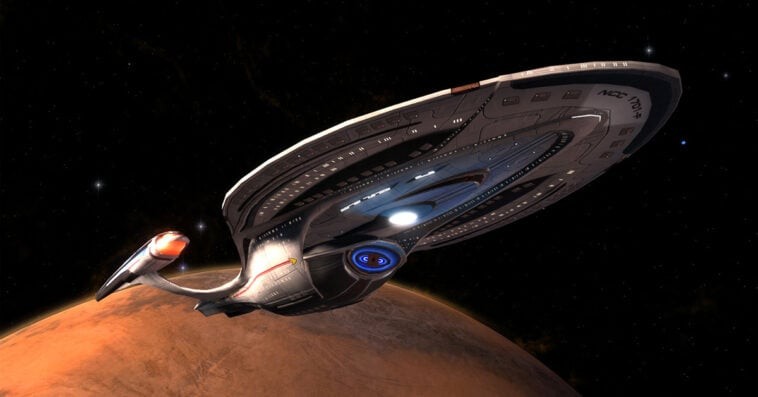 A new Enterprise starship will make an appearance in Star Trek: Picard season 3.

During the Star Trek panel at the San Diego Comic-Con (SDCC) last month, actor Patrick Stewart mentioned that the third and final season of Picard will be returning to the original Enterprise. Interestingly, Stewart also revealed that Trekkies will “see more than one Enterprise” in the show’s final chapter, leading some fans to believe that either the Enterprise-D or the Enterprise-E will pop up in the program’s last batch of episodes.

"We do return to the original Enterprise. I forgot we had carpet on the floor. That's the kind of advancement that's been made." – @SirPatStew #StarTrekPicard #StarTrekSDCC #StarTrek #sdcc #SDCC2022

Give me all of them lol pic.twitter.com/L44QLKA1E7

But in a reply to a fan tweet, Picard showrunner Terry Matalas teased that Picard season 3 will feature a new Enterprise that has never been seen in any Star Trek series or movies before.

Shutting this down before people get their hopes up. It’s not what you think. So what the F are they talking about then? Get it? What the F? *cough! Okay, I’ll see myself out. https://t.co/RMCBzMktar

The use of multiple “F” in Matalas’ tweet above seems to suggest that Enterprise-F will make its live-action debut appearance in Picard season 3. While that’s likely the case, he made it clear in a follow-up tweet that the show’s final season won’t take place in the said starship.

The Enterprise-F has yet to make its first live-action appearance in the Star Trek franchise. But a version of the starship appears in the video game Star Trek Online, which takes place during approximately the same era as Picard. Though that game is not officially canon, some of its ship designs have previously appeared in Picard, according to ComicBook.com.

The Enterprise-F’s potential appearance in Picard season 3 shouldn’t be a surprise to fans as the starship would be the natural successor to the Enterprise-E, which debuted in the 1996 film Star Trek: First Contact after the Enterprise-D’s destruction in the 1994 movie Star Trek Generations.

Though Frakes, Sirtis, and Spiner have already appeared alongside Stewart in previous seasons of Picard, it will be the first time that they will be joined by Burton, Dorn, and McFadden.

Plot details on season 3 of Picard are scarce, but Matalas previously teased that the final season will feature a universe-altering event. In a cover feature for SFX magazine ahead of the season 2 premiere of Picard, Matalas revealed that the Star Trek universe won’t be the same again after Picard season 3. “Definitely in season 3, there are some game-changing Star Trek universe ideas,” said the showrunner at the time.

Paramount+ has yet to set an exact release date for Picard season 3, but the SDCC teaser for the show’s final installment confirmed that it will premiere sometime in 2023.

As long as you remain steadfast, you are never without hope. #StarTrekPicard concludes with Season 3 in 2023, exclusively on @ParamountPlus. pic.twitter.com/MD2TTRi0gY