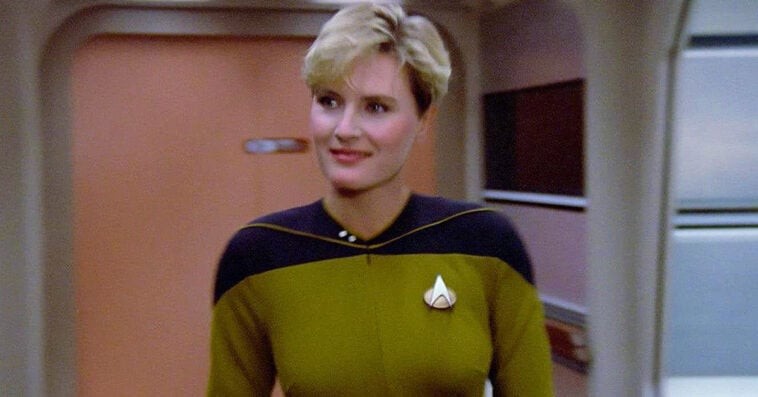 Another original Star Trek: The Next Generation main character is making an appearance in Star Trek: Picard season 3.

Denise Crosby, who played Tasha Yar in The Next Generation, has hinted that her Star Trek character will appear in Picard season 3.

According to TrekMovie.com, a fan asked Crosby on the opening day of the 56-Year Mission Star Trek Convention in Las Vegas if she will be part of Picard season 3, which is bringing back most of her former The Next Generation castmates for what has been described as a “sendoff” season.

Seemingly surprised by the question, the actress replied: “Oh. I don’t want to give away too much. But I’m going to tell you that you will see Tasha Yar, but I’m not going to tell you how. You’ve got to watch.”

Crosby’s answer is quite intriguing, especially after she told TrekMovie.com last May that she had “never been asked” to appear in Picard season 3. When the website noted that production on the final season of the show had already wrapped last March, the actress even commented that the “ship has sailed.”

While it’s possible that Crosby was just lying when she said that she was not asked to return for Picard season 3, it’s equally possible that she’s actually telling the truth. After all, there are a couple of ways in which Yar can appear in Picard without Crosby filming a single scene on set. For instance, Crosby probably shot a brief scene remotely or the show would just use old footage of her as Yar.

Who is Tasha Yar?

First appeared in The Next Generation’s pilot episode, Encounter at Farpoint, Yar was the chief of security aboard the USS Enterprise-D in the show’s first season. Carrying the rank of lieutenant, Yar was regarded as a forerunner to other strong women in science fiction.

In Skin of Evil, the 23rd episode of The Next Generation’s first season, Yar was killed off by a powerful entity resembling a sentient oil slick. The manner of death of the character was received with mostly negative reviews, as that kind of passing was usually reserved for redshirts and similarly unnamed characters. Her death scene was so bad that it was even included in a list of tasteless sci-fi deaths.

Yar was written back into the series for a guest appearance in season 3 episode Yesterday’s Enterprise, in which her character was still alive in an alternate timeline. Yar also returned in the show’s series finale, All Good Things…, in scenes set during the events of the show’s very first episode.

Aside from Yar, Crosby also played Sela in seasons 4 and 5 of The Next Generation. Sela is a Romulan commander and hybrid daughter of an alternate timeline version of Yar.

Why did Denise Crosby leave Star Trek: The Next Generation?

In an interview with StarTrek.com back in 2012, Crosby pointed out that she was not fired from The Next Generation, noting that it was her who decided to leave the show as a series regular at the end of the first season.

Asked if she made the right choice to exit the series at the time, the actress said: “Yes. For me, I was miserable. I couldn’t wait to get off that show. I was dying. This was not an overnight decision. I was grateful to have made that many episodes, but I didn’t want to spend the next six years going “Aye, aye, captain,” and standing there, in the same uniform, in the same position on the bridge. It just scared the hell out of me that this was what I was going to be doing for the next X-amount of years.”

Crosby continued: “I think you have to take your chances. I was really young. I didn’t have to make house payments or put kids through private school or support people. I was free to make those kinds of decisions. I’d been in acting school really dreaming of playing all kinds of different things. Whether it’ll happen or not, you don’t know, but you’ve got to give yourself a chance. God forbid you go through your life thinking, “What if?”

Star Trek: Picard season 3 doesn’t have an exact release date yet, but it is set to premiere on Paramount+ in early 2023.