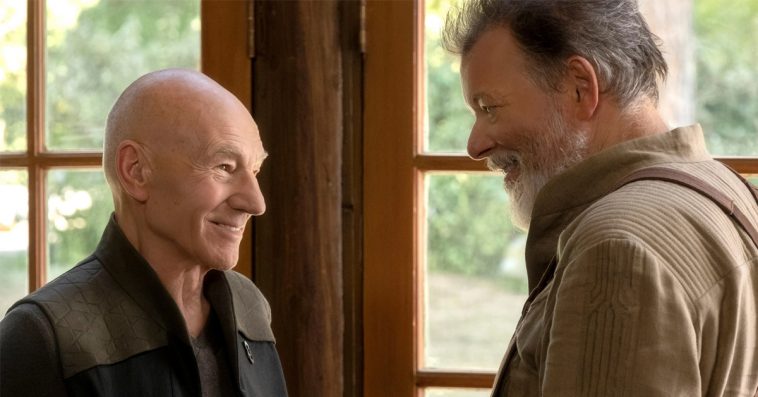 Star Trek: Picard will premiere in three weeks’ time, and to make fans more excited about the upcoming series, a brand new teaser for the show has been dropped during an NFL game this week.

The 30-second clip shows Jean-Luc Picard (Patrick Stewart) meeting up with his former Enterprise crew members William Riker (Jonathan Frakes) and Deanna Trois (Marina Sirtis). “The girl’s life is still in danger,” Picard tells the couple. “We have to help her.”

The girl Picard is referring to is Dahj (Isa Briones), a mysterious young woman in hiding who comes to Picard for help. Little is known about Dahj, but her arrival in Picard’s life brings the former Enterprise captain back to action, as he tries to keep her safe from threats that put her life in danger.

Though Dahj needs help, the NFL teaser reveals that she isn’t a damsel in distress, as she appears to have some training in hand-to-hand combat.

While it’s unclear how much Riker and Troi will be involved in the mission to protect Dahj, Picard will be getting some assistance from a new crew that he will assemble. That crew will be composed of pilot Chris Rios (Santiago Cabrera), ex-intelligence officer Raffi Musiker (Michelle Hurd), Dr. Agnes Jurati (Alison Pill), and Romulan refugees Elnor (Evan Evagora) and Narek (Harry Treadaway).

As also seen in the NFL teaser, Jeri Ryan will be reprising her role as Seven of Nine in the new series.

Directed by Hanelle Culpepper, the first episode of the first season of Star Trek: Picard will air on Monday, January 23rd on CBS All Access.

READ  Everything we know about The Umbrella Academy Season 2: release date, cast, and plot