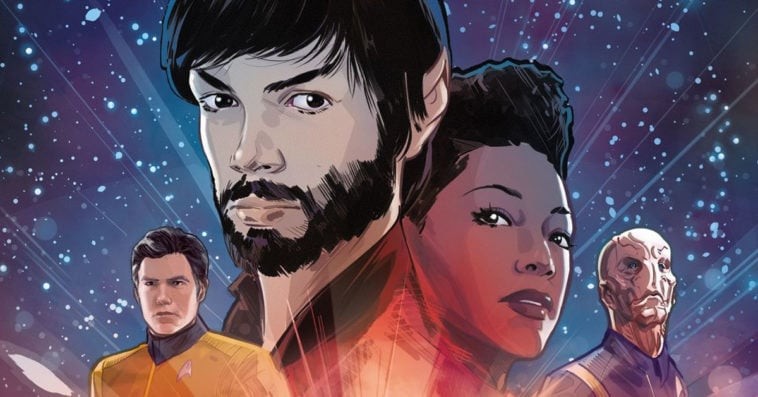 IDW Publishing has announced a new comic book miniseries that will look into the repercussions of the game-changing Season 2 finale of Star Trek: Discovery.

Titled Star Trek: Discovery – Aftermath, the upcoming three-issue comic book will tie up some loose ends with some characters that viewers won’t probably see on the CBS All Access show for a while.

At the end of the show’s sophomore run, most of the main characters as well as the U.S.S. Discovery herself went 950 years into the future, while characters like Spock (Ethan Peck), Captain Pike (Anson Mount), L’Rell (Mary Chieffo), and Ash Tyler (Shazad Latif) were left behind.

From writers Kirsten Beyer and Mike Johnson and artist Tony Shasteen, the new comic book will put the spotlight on the characters that remain in the show’s original timeline. It will focus on Spock, who will attempt to get over losing his sister Michael Burnham (Sonequa Martin-Green), as well as on Pike and L’Rell who will try to negotiate a fragile peace.

“The new series shows how Pike, Spock, L’Rell, and the rest of the cast deal with the fallout from the mind-blowing events of Season 2,” Johnson said in a statement. “And we couldn’t be happier that Tony Shasteen is beaming back onboard for this story!”

“To be able to follow up on the huge status-quo shift presented in that finale is a dream come true, especially with a team as talented as Kirsten, Mike, and Tony,” said IDW editor Chase Marotz. “In terms of fitting into the broader universe presented in Discovery, this new series is perhaps our most essential yet, and I can’t wait for everybody to see what we’ve got in store for them.”

As announced by Marotz at WonderCon last month, the new comic book miniseries will kick off in August.