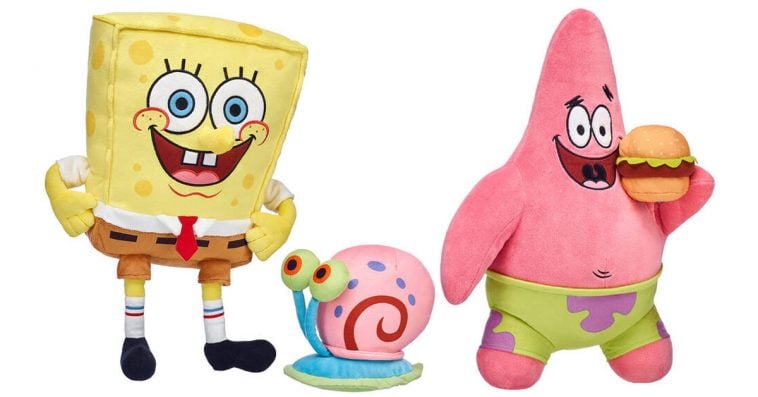 In celebration of the 20th anniversary of Nickelodeon’s animated comedy series SpongeBob SquarePants, Build-A-Bear Workshop has just launched its first-ever line of stuffed toys based on some of the most popular residents of Bikini Bottom.

The vibrant collection includes cute plushies of SpongeBob SquarePants and his best friend Patrick Star, which both sell for $29 each. SpongeBob’s pet Gary the Snail also gets its own stuffed toy. Though smaller than the SpongeBob and Patrick plushies, the $12.50 Gary the Snail toy is still very huggable.

Jumpin’ jellyfish! You can celebrate 20 years of @spongebob SquarePants with our NEW collection! Add our new #SpongeBob, online exclusive Patrick Star and pre-stuffed Gary the Snail to your collection!

The toy line also includes plush accessories such as the Krabby Patty Wristie and the SpongeBob SquarePants Plush Pineapple House. With a price tag of $6, the Krabby Patty Wristie looks just like the yummy Krabby Patties that SpongeBob grills at the Krusty Krab, and can be attached to any Build-A-Bear stuffed toy. The $18 Plush Pineapple House, meanwhile, is perfect for fans who love to re-enact scenes from the Stephen Hillenburg-created franchise with their plushies.