The Samsung Galaxy Buds don’t stand out from the wireless earbud crowd on their own, but as an add-on purchase when buying a Samsung Galaxy phone, they’re more than good enough to make throwing them into the cart a no-brainer.

It’s an odd thing, reviewing something like the Samsung Galaxy Buds — like the Google Pixel Buds and Apple AirPods, they’re meant more as an upsell at checkout counters, virtual and physical, than anything that’s supposed to compete with similar products. Now that Samsung has figured out how to make pairing as seamless as it is between the AirPods and the iPhone, all the Galaxy Buds need to do to be successful is to not screw anything up — but they need to be at least passable enough to make that simple pairing a nice enough feature to make the Samsung Galaxy S10 buyer not bother to look elsewhere for wireless earbuds.

It wasn’t a foregone conclusion. Samsung’s previous true wireless earbuds, the IconX, were one of the first of their kind on the market, and it showed — while the fitness features were nice, battery life topped out at two hours and they were plagued by connectivity problems. 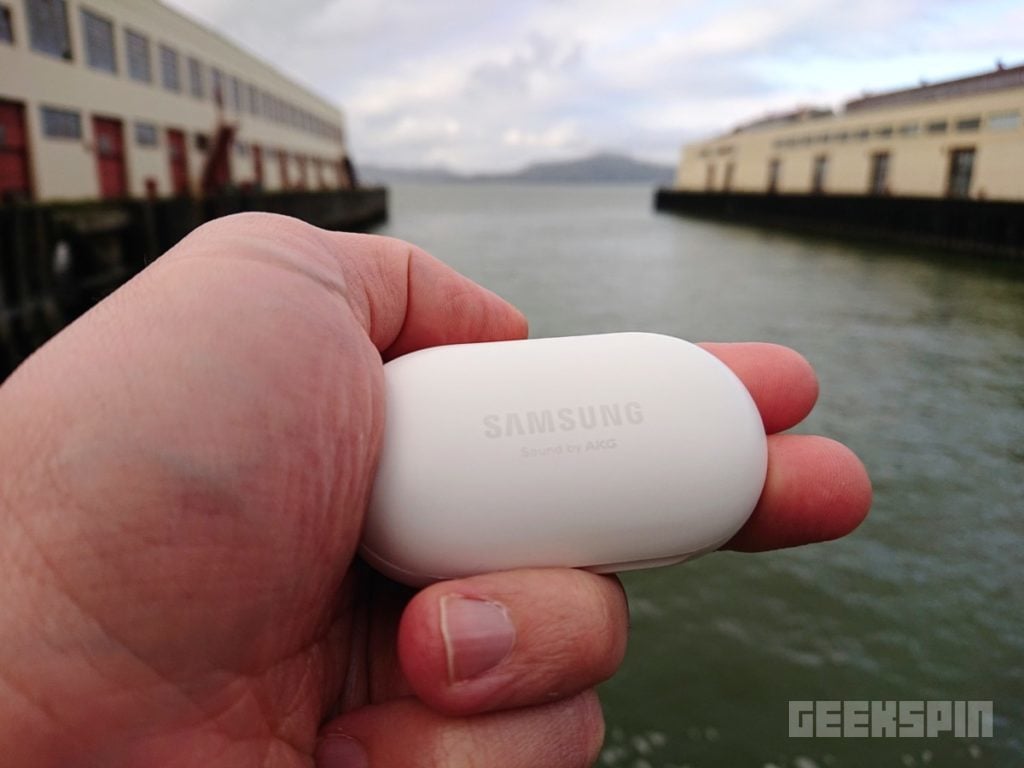 Samsung got it right this time. The Galaxy Buds are simpler than the IconX, but Samsung has avoided making any deal-breaking mistakes that could steer Galaxy users toward other earbuds. With vastly improved battery life, reliable connectivity, consistent touch controls, and pretty good sound quality for the size, the seamless pairing with the new Galaxy S10 and Fold phones make the Galaxy Buds an easy add-on purchase for Samsung users.

While I wasn’t able to review the Galaxy Buds with one of the new Galaxy phones, I was able to check out that pairing process for myself at Samsung’s press event in February. It’s as simple as it gets — take the buds out of their case near your Galaxy phone, and you’ll get a prompt from the SmartThings app asking you to pair. Hit connect and they’re paired. 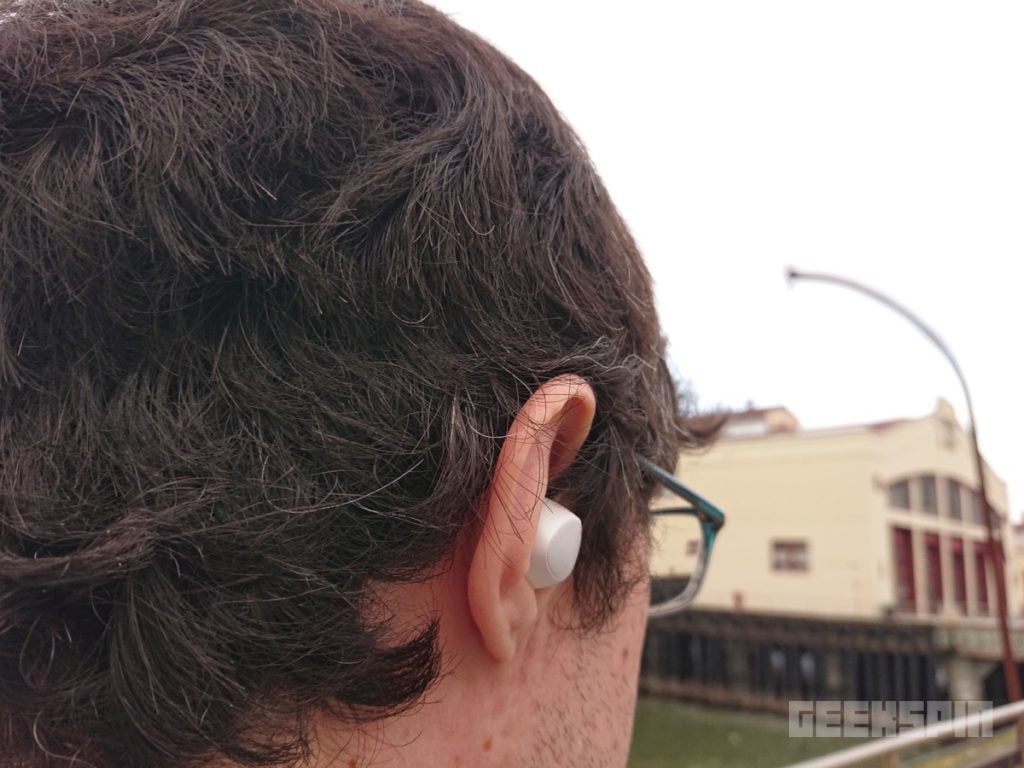 Pairing with any other Android device is still easy with the use of the Galaxy Wearable app, which Galaxy owners will want to use, as well — the app has adjustable EQ settings, a battery monitor, notification settings (so the buds don’t blow up every time you get a message), and a feature that lets you ping your buds, in case you’ve lost them somewhere within Bluetooth range.

Once they’re paired, the Galaxy Buds work about as well as any other quality pair of wireless earbuds I’ve tried. The audio quality is great for drivers of this size. Granted, they should be — Samsung is reaping the benefits of acquiring audio and connected car firm Harman, putting their AKG sound profile to good use in the Galaxy Buds.

It really helps that the Samsung has made the Galaxy Buds much smaller than the IconX, too — not only do they look better in the ear, it’s easier to get the kind of tight seal needed for good bass response. The smaller size means that Samsung has cut the fitness features that were in the IconX, but the Galaxy Buds seem intended as more of an everyday practical kind of product — they’re built for work, city streets, and the commute. They’re rated IPX2, so while there’s some protection against sweat, it’s probably just insurance for hot days. 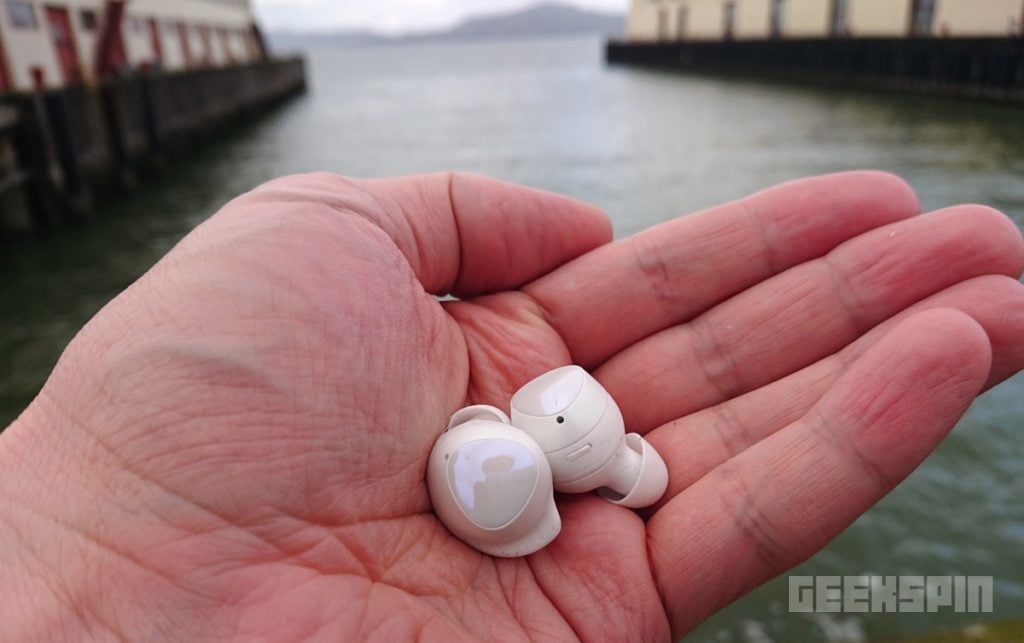 The simpler design and lack of fitness features have helped to lengthen battery life — the Samsung Galaxy Buds get about six hours on one charge, plus another seven hours from the charging case. Over the week and a half I used them, I never found myself with dead buds — as long as you remember to stick them in the charging case when you take them out, you should be able to make it to the end of the day. The fact that a Galaxy S10 phone can be used as a wireless charging mat to give the Galaxy Buds case a little extra juice should prevent battery life problems for Galaxy fans (there’s a USB Type-C charging port on the back of the case, as well).

The Galaxy Buds rely on touch controls, which I found to be consistent and responsive. Single tap for play/pause, double tap to skip forward, and triple tap to skip back, with a long press bringing up your voice assistant — if you’re using a Galaxy S10 or Fold, that’ll be Bixby by default, but the long press can be customized using the Galaxy Wearable app. And, like a lot of other buds out there, the Galaxy Buds will pause music automatically when taken out of the ears.

But, while the Galaxy Buds are solid in most respects, they don’t solve any of the problems that wireless buds usually have, either. The mics aren’t quite good enough to make up for how far away they are from your mouth — call quality is passable, but if crystal clear communication is a must-have for you, you’ll want to still get a business-oriented Bluetooth headset. The outer mic can be used to pipe in background noise if you want to hear sounds of traffic while walking, but I heard more undifferentiated hissing than clear, distinct, and louder sounds of horns honking and people talking. Some other buds do background noise a little better, but if safety on the street is a concern, you’re probably still better off getting a bone conducting headset.

By making companion buds and making them super easy to add to your cart while buying a Galaxy phone, all Samsung had to do was avoid any blunders so grievous that they’d be dealbreakers. In that sense, the Galaxy Buds are a resounding success — with solid sound quality, battery life that will get you through the workday, and reliable connectivity, the buds simply fade into the background and do their job well. They won’t blow you away in any one area, but if you’re just looking for a simple, straightforward set of buds that you can buy easily with a Galaxy phone and never have to think about again, the Galaxy Buds are it. The reasonable $130 price tag reflects that.