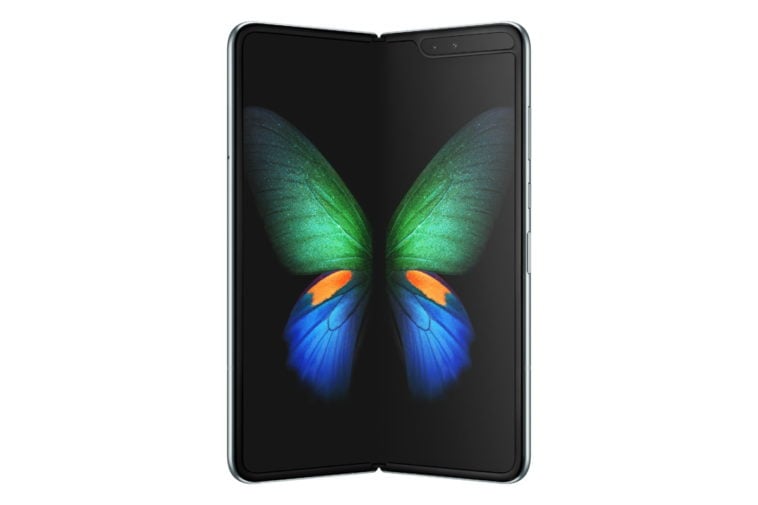 When a new technology hits the market, it’s really exciting! It, uh, also tends to be pretty expensive. That’s the Samsung Galaxy Fold — intriguing possibilities, unanswered questions, and a $2,000 price tag that makes us think most of us won’t be using it regularly for a while.

Samsung kicked off their Unpacked 2019 event in San Francisco with the announcement of the Galaxy Fold, their most talked about and most leaked product from the new lineup. Of course, there’s been talk of folding phones for years — it’s been no secret that the likes of Samsung and LG have been investing heavily in the kinds of flexible displays that would make these devices possible. That investment has now borne fruit, and while there’s a lot of practical appeal to the foldable phone, it’s also clear that the Galaxy Fold is a first generation device, carrying all the baggage that usually comes with that. 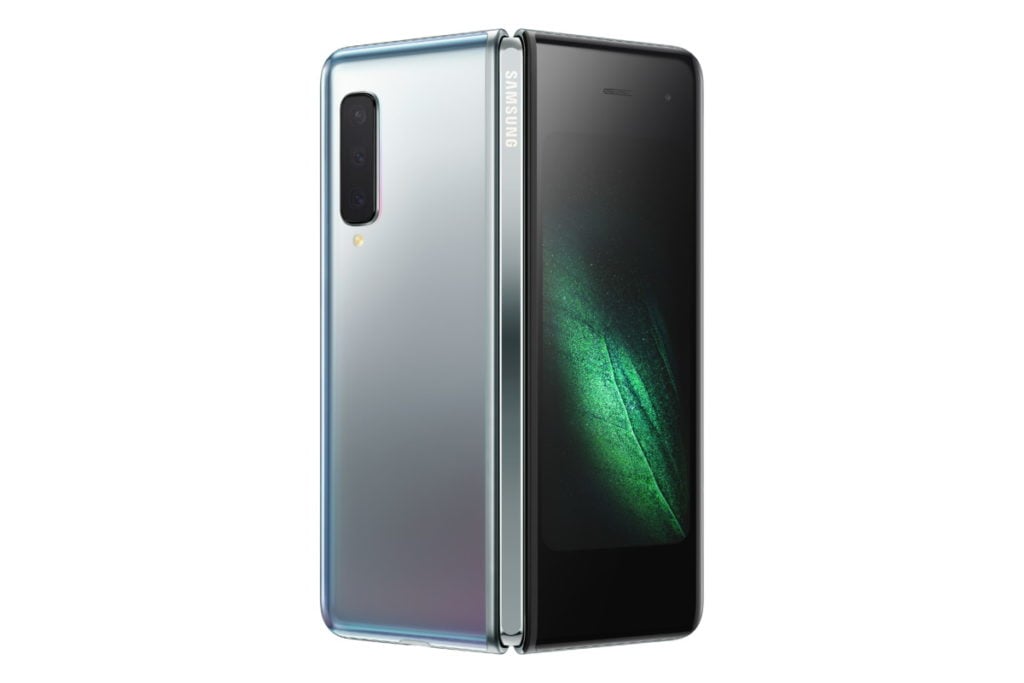 The Galaxy Fold is a 4.6″ smartphone that folds out into a 7.3″ tablet. The concept hinges on Samsung’s Infinity Flex display, which can fold without leaving any unsightly marks or damage on the display. There’s an intricate gear mechanism keeping the two halves of the chassis together, with the delicate pieces of the hinge completely covered for a sleek look.

Samsung has made the user experience seamless to really drive home the practicality of the concept — simply open up the phone, and whatever you were looking at on the smaller screen appears on the larger. 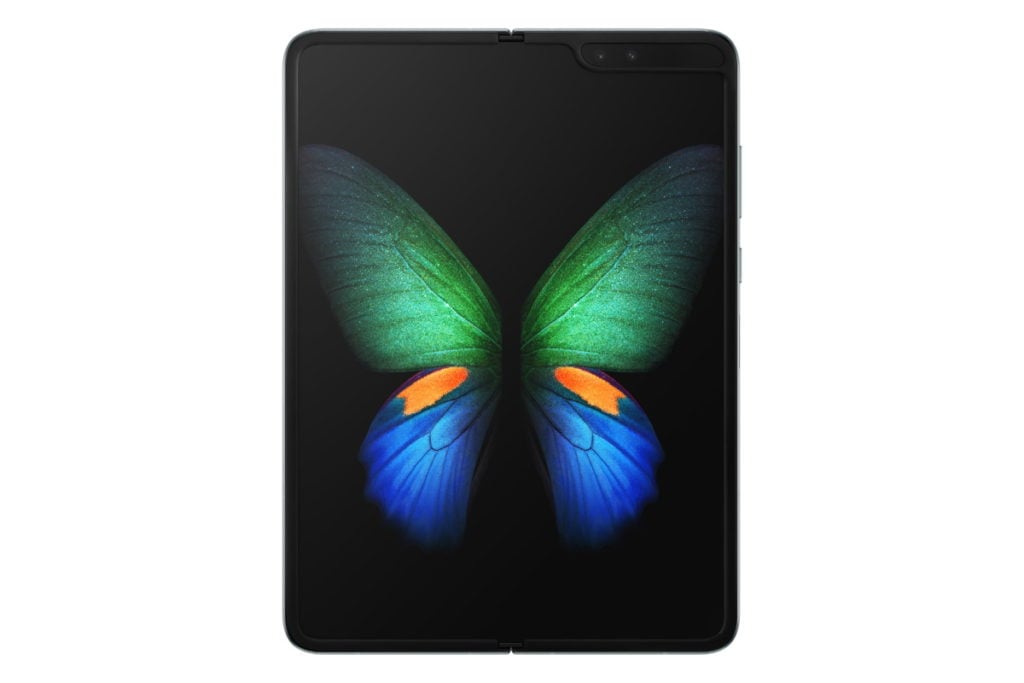 On the bus? Unfold the Fold and watch some Netflix, then fold it up and put it in your pocket when you get to your stop. Trying to make your way to a new restaurant after getting off that bus? Unfold the phone so you can look at a map on the larger screen. It makes enough sense to make us think, or at least hope, that the concept represents the immediate future of smartphones.

The larger screen also allows for three-app multitasking, which ends up looking like one dominant pane taking up half the screen and two smaller panes off to the side. You can always rearrange those panes, so if you want to switch your focus to a video or a Google search, you can just drag that to where the larger pane is. 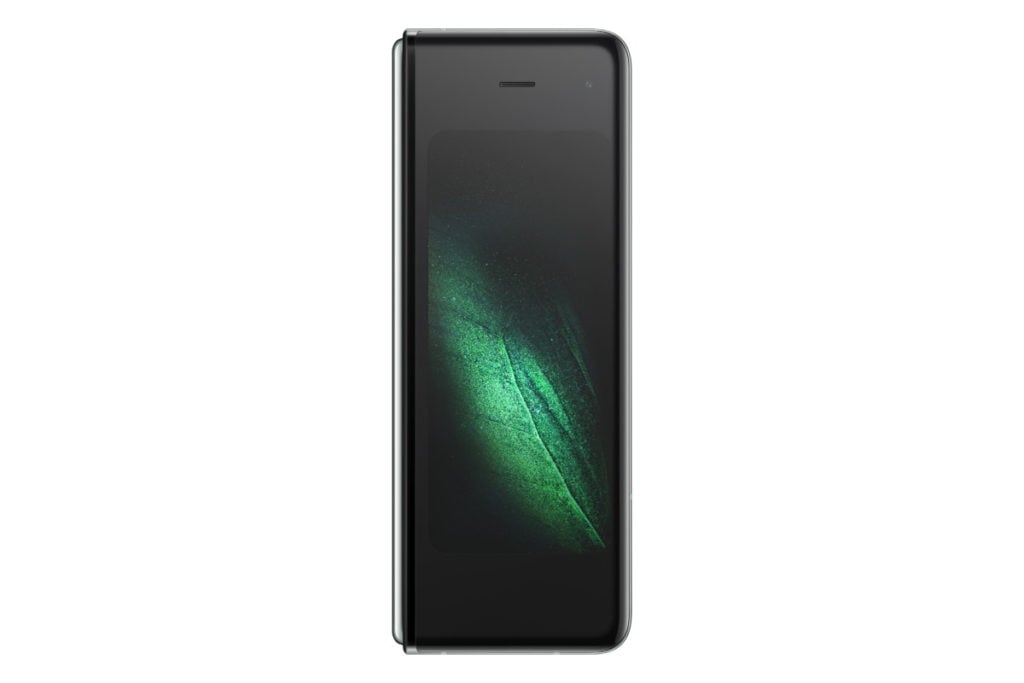 Having a folding phone does mean that you’re dealing with more surfaces, and you know Samsung’s never going to want you to be too far away from a camera. The Fold has six — there are three on the back, regardless of whether the phone is folded or unfolded. That includes a 16 MP ultra-wide angle f/2.2 camera, a 12 MP wide-angle f/1.5 camera, and a 12 MP telephoto f/2.4 camera with 2x optical zoom — the same setup as the S10 and S10+. When the phone is folded, the smaller display is paired with a single 10 MP f/2.2 camera, and when unfolded, you’re faced with the same 10 MP f/2.2 camera plus an 8 MP RGB depth-sensing camera for depth of field effects.

A lot of times, we’ll see a more experimental concept brought out with mid-range specs as a sort of hedge. Samsung didn’t have time for that — they stuffed the Fold with the Qualcomm Snapdragon 855 platform, 12 GB of RAM, 512 GB of speedy UFS 3.0 storage, and a huge 4,380 mAh battery (actually two batteries, one in each side) that will no doubt be put to the test. It also has a fingerprint scanner on the side (no ultrasonic sensor in either display, unlike the S10 and S10+), wireless charging, and AKG audio. Mostly all the good things!

But, first generation devices have a stigma attached to them for a reason. While the Galaxy Fold is powerful, there’s clearly a lot of room for improvement. While the smaller screen (when folded) will be welcomed as more pocket-friendly by many, not too many people will love seeing the huge bezels, especially compared to the all-display S10 devices. It makes for a gangly, awkward aspect ratio that most users will be unused to. It’s the first thing that comes to mind when I think about what will be improved in the Galaxy Fold 2.

The lack of a microSD card slot and headphone jack probably won’t go over well with the faithful, either, and while 512 GB is a lot of storage, those 4K videos you’re taking eat up their fair share of it.

Then, there’s what we don’t know. The hinge and folding display looked impressive when Samsung showed the Fold off on stage, but there were no demo units on the floor after the event, so we can’t say ourselves how that hinge feels. Even if it feels great, there’s no telling how it’ll hold up to the beating the average phone user can dish out — that’s the risk inherent in buying a first generation device.

But, at least for now, the Galaxy Fold isn’t for the average user. The presenters took special care to describe the Fold as a luxury device — as they should for a phone that starts at $1,980. That makes it a phone purely for the power users and enthusiasts. Well-heeled unofficial beta testers, let’s call them.

But, once those brave souls start uncovering all the unknown unknowns, it’s possible Samsung could have something really special in this concept. The practicality of having a single device that can change size according to your needs is clear, even if the tech is currently priced out of the reach of most of us. It’s also true that users are increasingly holding onto phones longer, which helps to justify paying more for each phone to some extent.

Almost $2,000 is maybe outside of that extent. But, in general, the Galaxy Fold looks like a good start. If Samsung can get the price down in subsequent models, it’s easy to see a future where the folding phone becomes ubiquitous, and in 2029 we can all enjoy the retrospectives about the press conference where it all started.