At one point during Samsung’s Unpacked 2019 event in San Francisco today, Samsung President of Mobile Communication Business DJ Koh dismissed the idea that smartphones had become passe in their old age. He was talking about the bendable Samsung Galaxy Fold, and while he might have a point with that device, the new Samsung Galaxy S10 devices aren’t reinventing anything. That’s not a bad thing. 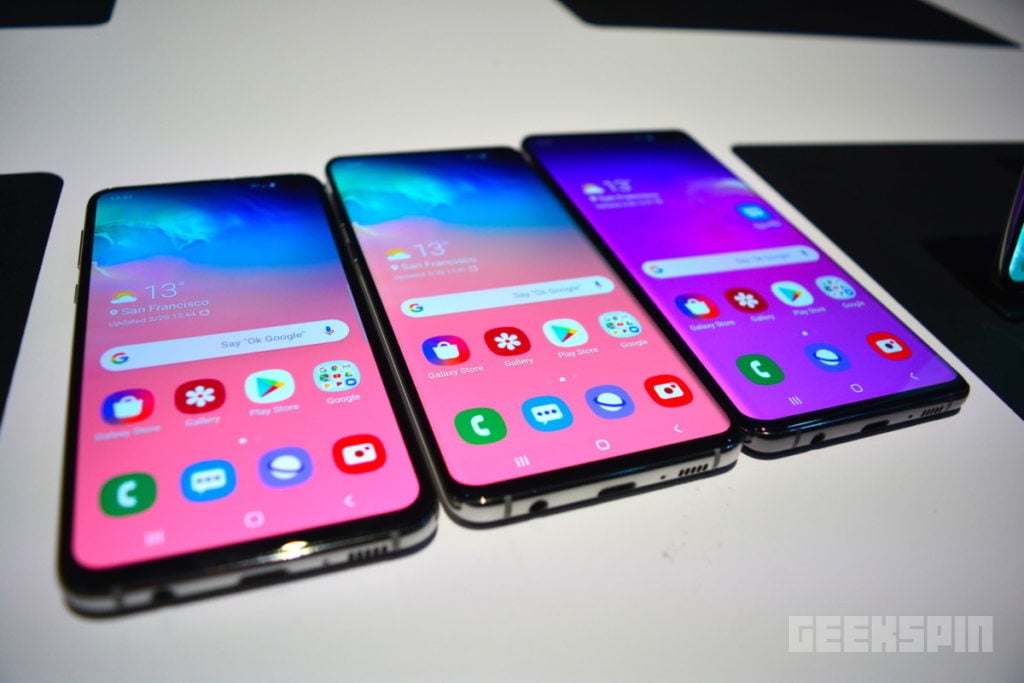 At Unpacked 2019, Samsung officially announced the 6.1” Galaxy S10, the 6.4” Galaxy S10+, and the 5.8” Galaxy S10e — you might have heard of them, since virtually every detail about the lineup leaked well ahead of the event. So, while there weren’t any surprises, we did get to finally take a look at a few new features that make the S10 family just a little more exciting than the average smartphone announcement. 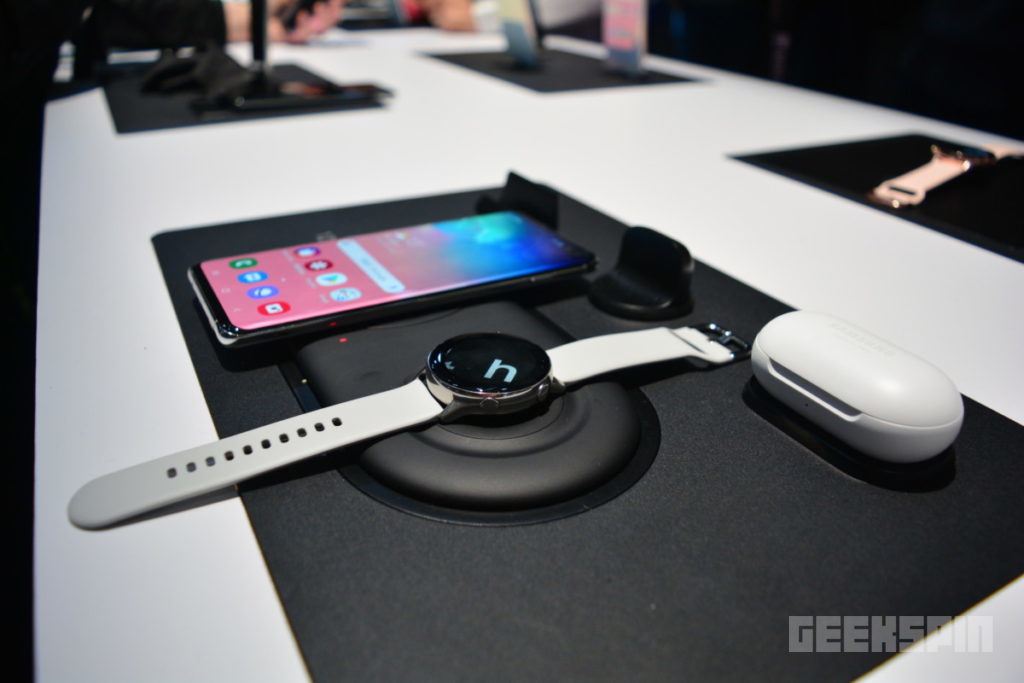 Like, how all three phones can pay it forward when it comes to power. Wireless charging on the Galaxy S10 phones now goes both ways — not only can they be charged wirelessly, the phones can serve as wireless charging mats themselves for any Qi-enabled device (we confirmed that the feature won’t just be limited to Samsung accessories). It’s a cool feature that’s easily turned on using Quick Settings, but it’ll be interesting to see how often it’s used — it’ll be nice to charge those short-lived wireless earbuds or smartwatches in a pinch, but then you also can’t use your phone without interrupting the charge. 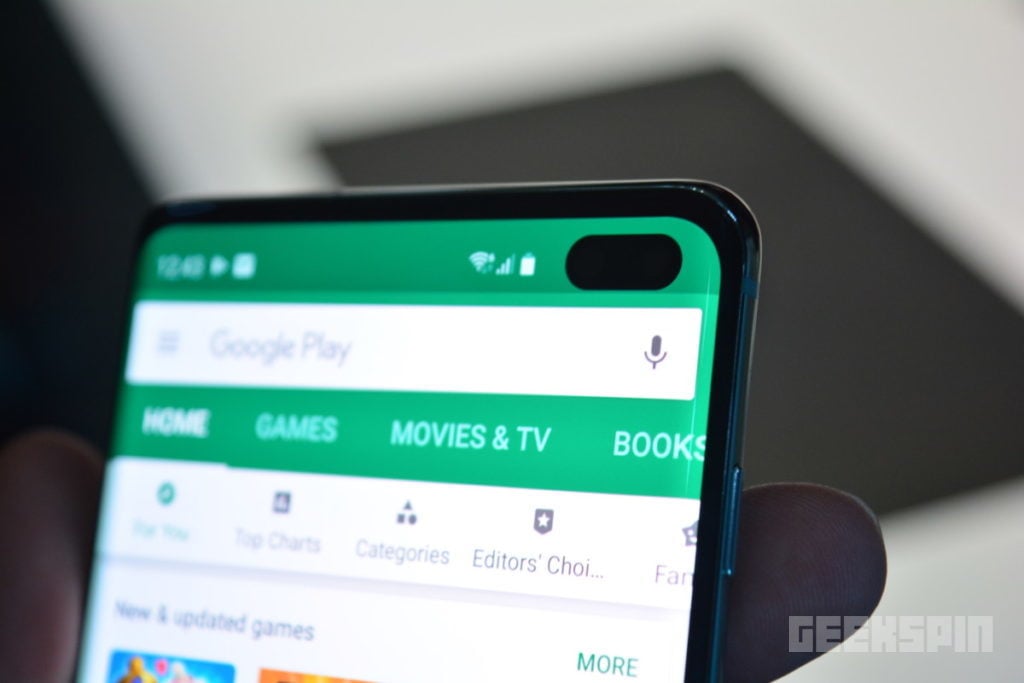 Staying at the cutting edge of specs and standards has become core to the Galaxy S line’s identity, and in this case, that’s most clearly expressed in the display. There’s a lot of it, too! The display now stretches across the entire front of the phone, with only a laser-cut hole in the top left corner for the front-facing camera (or cameras, in the case of the S10+). It’s a pretty slick solution aesthetically — with the display on, the front-facing camera looks like it’s just another icon on the status bar. More importantly, the Dynamic AMOLED display is compatible with HDR10+, making good use of that bit of extra display space to draw out details in videos more clearly.

Some of those videos might be your own! The S10 phones can all take video in HDR10+ as well, which is huge for the creative set — it’ll be possible to take HDR10+ video and edit it all on the phone while never worrying about the finished product looking different than expected. In fact, Samsung went full bore there, including Adobe Premiere Rush to provide creators with quick, easy-to-use editing tools.

Plenty of options if you’re just taking photos, too. The Galaxy S10 and S10+ both have three rear cameras — a 12 MP f/2.4 wide-angle camera, a 12 MP f/1.5 telephoto camera, and a 16 MP f/2.2 ultra-wide camera with a 123-degree FOV (the Galaxy S10e lacks the telephoto camera). No matter if you’re taking a portrait, a landscape shot, or doing some close-up photography, you’re going to have access to the right tool for the job. It helps that the wide-angle and telephoto cameras both have optical image stabilization, too. And, if a lot of those photos end up on Instagram Stories, good news — Instagram has been integrated with the Galaxy S10’s camera, so you can upload straight from the camera, slap on your stickers and emoji, and post without having to go into the Instagram app.

That front camera set into the display is capable of 4K recording, so it’s no joke, either. The 10 MP Dual Pixel selfie camera can take some pretty good shots on its own, but the S10+ exclusively gets a second 8 MP f/2.2 camera for depth of field. Turns out, the phone can do a lot with that extra camera and some hefty AI processing in the camera — effects like bokeh and fade can be previewed before taking a photo, and the phone is able to recognize some objects automatically and adjust settings accordingly, using different presets for food, pets, and so on.

It’s hard to make a fingerprint scanner exciting, but Samsung managed it this time. The Galaxy S10 and S10+ use an ultrasonic scanner located within the display, which is pretty sweet (the S10e gets a fingerprint scanner on the side of the phone)! It fixes the problem of having to include the scanner either on the back of the phone (less convenient when on your desk) or on the front (taking away from screen size), and it’ll also be handy when it’s raining — because it’s using sound waves to map your fingerprint, water won’t throw it off as much as it does optical scanners. It might still be difficult to use a wet phone once you’ve got it unlocked, but at least that’s step one taken care of!

But, something to note for longtime Galaxy S users — don’t just buy a screen protector as a matter of course. Regular screen protectors will disrupt that ultrasonic fingerprint scanner, meaning you’ll need something specially made for the S10, which will likely end up being more expensive. We know it’s being worked on, but Samsung reps weren’t able to provide many details.

While the S10e does lack some key features like the telephoto camera and ultrasonic fingerprint scanner, the processing power across all three is even, with all of them using the Qualcomm Snapdragon 855 platform. But, to the bigger phones go bigger batteries — the S10+ gets an impressive 4,100 mAh battery, while the S10 gets a 3,400 mAh battery and the S10e gets a 3,100 mAh battery. The S10+ capacity, in particular, will be great for anyone planning to use the phone to wirelessly charge other devices. You’ll be able to get between 6GB and 12GB of RAM and 256GB and 1TB of storage on the phones, depending on the model. And, traditionalists rejoice — you’ve got both a microSD card slot (up to 500 GB) and a headphone jack on all three phones.

With three models and several storage options available, it won’t surprise you to learn that the price range is pretty wide. From the most basic version of the Galaxy S10e to the 1 TB Galaxy S10+, you’re looking at between $750 and $1600. That’s awfully expensive for a phone these days, even if the expectation is probably that you’ll be hanging on to this for two to four years instead of the old one-to-two-year turnover cycle. Preorders will start tomorrow, and the phones will ship on March 8.

Samsung also revealed the Galaxy S10 5G, the first phone compatible with next-gen 5G networks. There aren’t many of those around yet, so it’s going to be a tough sell, especially as 5G-ready phones become more ubiquitous in short order. It’s also going to be a Verizon exclusive in the United States, so that might put you out of the market for one, too. All that said, it does have the largest display of any S10 at 6.7” and the largest battery at 4,500 mAh.