The Samsung Galaxy Fold and the Galaxy S10 trio got all the attention at Samsung’s Unpacked 2019 event, but there were a few accessories that got some screen time, too — a couple wearables for the fitness tracking set and Samsung’s latest crack at wireless earbuds. The new lineup includes the Galaxy Watch Active, Galaxy Fit, and Galaxy Buds. Let’s dive in! 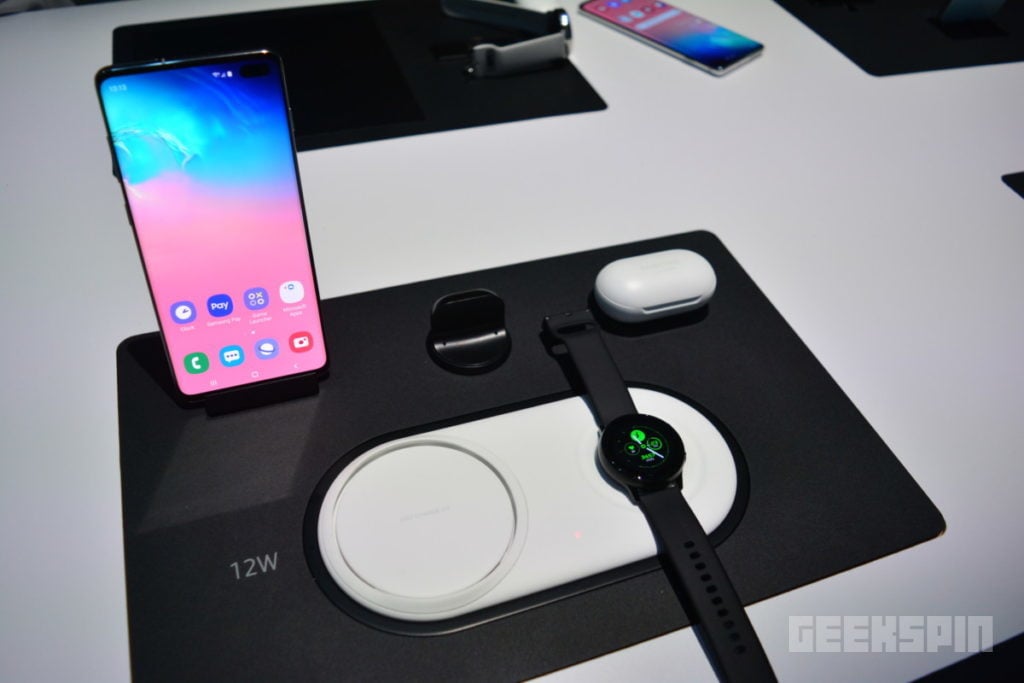 Samsung’s latest smartwatch is prioritizing size and simplicity — if you want a fitness tracker that can handle smartphone notifications and give you more advanced metrics like cadence and heart rate, you’ll want to give it a look. It has a 1.1″ display on a round 40 mm case that is 10.5 mm thick — on the wrist, it’s one of the sleeker smartwatches out there. It runs Samsung’s Tizen OS, which makes it easy enough to check notifications, send messages, or start and stop workouts with a few swipes and taps. 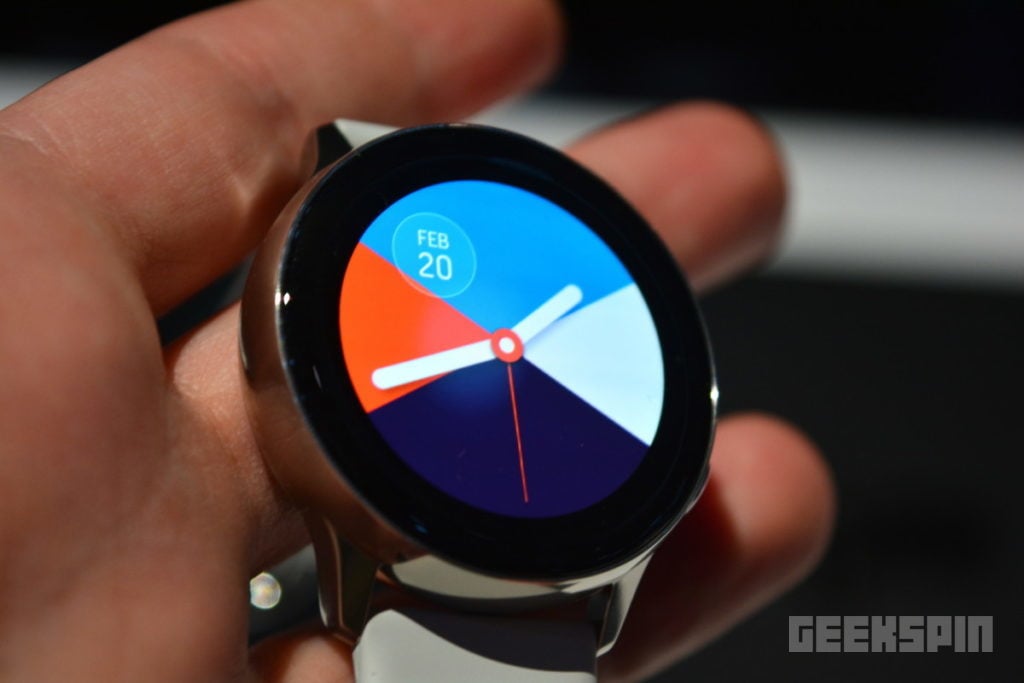 Relying heavily on a touchscreen might still prove to be too fiddly for many workouts, but the Galaxy Watch Active will be able to auto-detect some activities (like running or biking), so if that ends up being reliable, everything should work out! Still, the Galaxy Watch Active looks more like an everyday casual watch than a truly dedicated workout device. It’s probably the tons of sporty and fashionable bands that can be paired with the watch that makes us think that! The case itself comes in silver, black, rose gold, and sea green, so we’ll have all the opportunities to mix and match that we’d expect from a smartwatch.

Oh, and feel free to take it for a swim (depending on which band you have on)! It’s rated IP68, making it water resistant up to 5 ATM.

The Samsung Galaxy Watch Active will ship on March 8 and will cost $200. If you preorder between now and then, Samsung will throw in a free wireless charger.

This is the narrow fitness band counterpart to the Galaxy Watch Active, but it didn’t seem to get as much love at the event — Samsung didn’t have any demo units with them. We do know that it’ll be limited to drawing notifications, messages, calendar events, alarms, and weather information from your phone, which will be displayed on the narrow 0.95″ screen.

Think of this as your everyday fitness tracker — if you want something that can track your steps without you having to constantly charge it, the Galaxy Fit could be a good option. You will find a heart rate sensor and sleep tracking, though, so it’s not totally bare bones. It’s something made to fade into the background, lacking the fashionable flair of the Galaxy Watch Active — the Galaxy Fit only comes in black and sliver.

The Samsung Galaxy Fit is slated to come out in May with a $100 price tag.

We can’t have a major smartphone reveal without a matching pair of wireless earbuds, right? The Galaxy Buds are totally cordless earbuds that are best used with a Galaxy phone, but can be used as general Bluetooth earbuds. When opened up near a Galaxy device, a pairing prompt will automatically appear, making pairing a one-touch process, just as it is with the iPhone and the AirPods. They’re also integrated with Samsung’s Bixby voice assistant, which can be accessed with a long press on the buds’ touch-sensitive surfaces.

Samsung isn’t new to the wireless earbud game — the buds and matching charging case still resemble the Samsung Gear IconX, which were one of the first true wireless earbuds to market. As such, they were really rough — the earliest models were beset by connectivity problems and short battery life. The battery life is better now, at six hours of streaming music and five hours of calling, plus an additional seven hours stored in the charging case. As for connectivity, we’ve got a pair to review, so we’ll know soon! 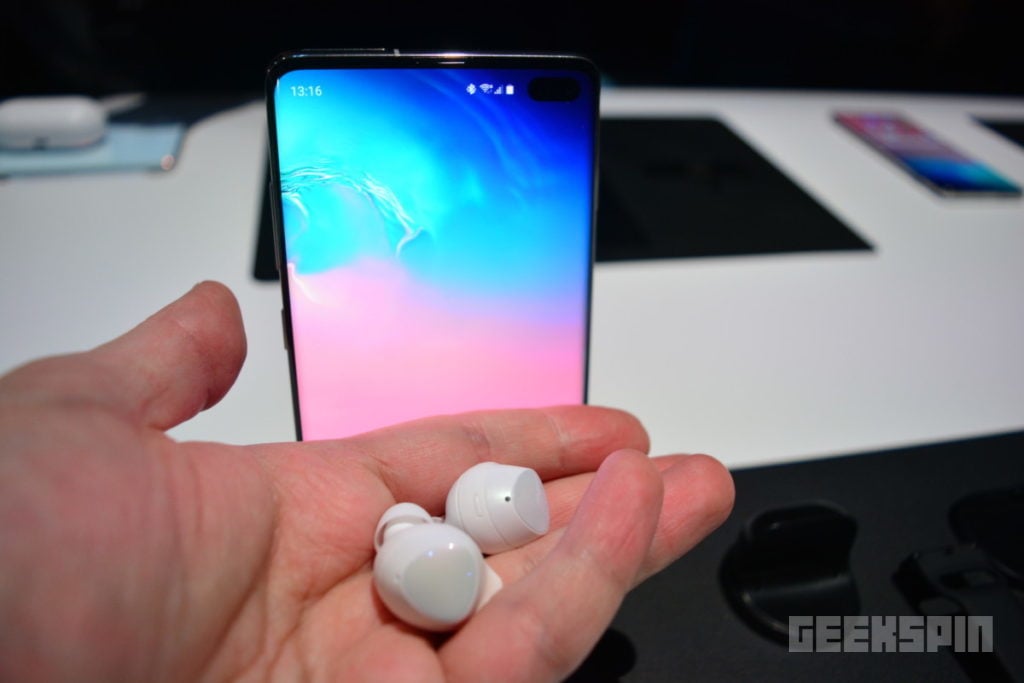 The Galaxy Buds also have dual microphones — one inner and one outer. The inner mic can help you to hear your own voice during calls, while the outer mic is able to pipe through background noise if you want to remain aware of your environment as you’re walking down the street.

They do lack the wow factor of the translation features Google has been able to show off on their Pixel Buds, but then again, a lot of that is software-based and not necessarily attributable to the buds themselves. They seem fine enough, and it’s pretty cool that you can flip an S10 over and use it as a wireless charging mat for the buds’ charging case in a pinch.