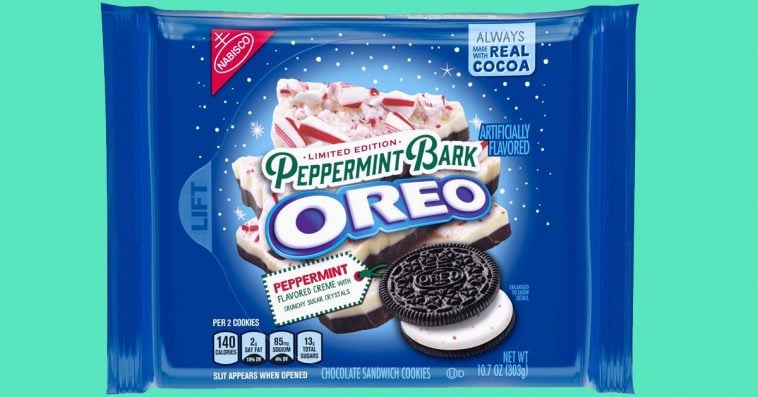 A year after its original release, Oreo’s Peppermint Bark flavor is back on store shelves for another limited run.

First introduced in October 2018, the holiday cookies have recently started to pop up on store shelves again. Some eagle-eyed cookie lovers have spotted the Oreo variant at Target and at Walmart where they are being sold for just $2.99.

According to Instagrammer @junkfoodmom, packs of Peppermint Bark Oreos can be found alongside other Oreo Christmas-themed treats, including the delightful White Fudge Covered Oreos and the red crème-filled Winter Oreos.

Well here’s a look at the last varieties of Oreos we will see this year. These are on shelves at a few Target stores right now. (Love the knit hat design packaging). 🎄🎅🏼 What was your favorite Oreo release of 2019? Mine would be the Most Stuf. Can’t wait to see what 2020 brings🤔. #oreo #oreos #christmas #christmasoreos #holidayoreos #joyoreos #peppermintbarkoreos #peppermint #mondelez #nabisco #seasonalcookies #cookies #christmascookies #whitefudgeoreo #winteroreos

Your calendar is wrong. Today is Christmas. 🎅🏼

Directed by Sergio Pablos, Klaus tells the story of Jesper (Jason Schwartzman) who is stationed on a frozen island above the Arctic Circle after he was named as the postal academy’s worst student. Due to the island’s feuding locals who hardly exchange words let alone letters, Jesper thinks of giving up until he finds an ally in local teacher Alva (Rashida Jones), and meets Klaus (J.K. Simmons), a mysterious carpenter who lives alone in a cabin full of handmade toys. Their unlikely friendship brings laughter to the island, forging a new legacy of generous neighbors, magical lore, and stockings hung by the chimney with care.

According to the product description on its packaging, Peppermint Bark Oreos “sandwiches scrumptious peppermint crème filling with crunchy sugar crystals between the bold taste of two chocolate wafers.”

As mentioned above, Peppermint Bark Oreos will only be available for a limited time, so if you love this Oreo variant, start stocking up for the holidays as early as now.