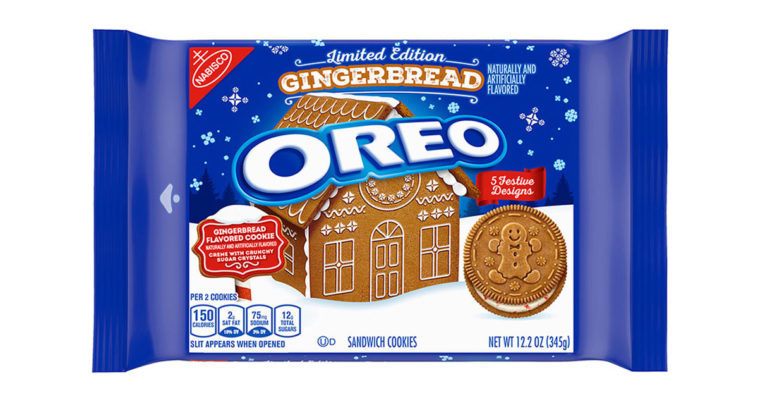 A rep for the snack brand confirmed to People on Tuesday that the new Gingerbread Oreos are already on store shelves. The limited-edition holiday treat was first spotted by junk food Instagrammer @dncsnacksterz at a Walgreens in Staten Island, New York. The new flavor, however, is not a Walgreens exclusive, as a rep for the brand told Today in an email that the just-released variant is “available wherever Oreo is sold, while supplies last.”

According to its packaging, Gingerbread Oreos feature two gingerbread-flavored cookies filled with Oreo crème swirled with crunchy sugar crystals. To make snacking even more Christmassy, the golden cookies come in five festive designs, including a gingerbread man surrounded by snowflakes.

This isn’t the first time Oreo has introduced a gingerbread flavor to the market. The snack brand first released a gingerbread variant back in 2012. That version returned to store shelves around the holidays for several years, but it’s been a long time since they’ve been part of the brand’s Christmastime offerings. Unlike the new Gingerbread Oreos, the old version was made up of two golden cookies filled with gingerbread-flavored crème.

As mentioned above, the new Gingerbread Oreos are only available for a limited time, so if gingerbread is your favorite holiday cookie, then make sure to grab multiple bags on your next trip to the grocery.