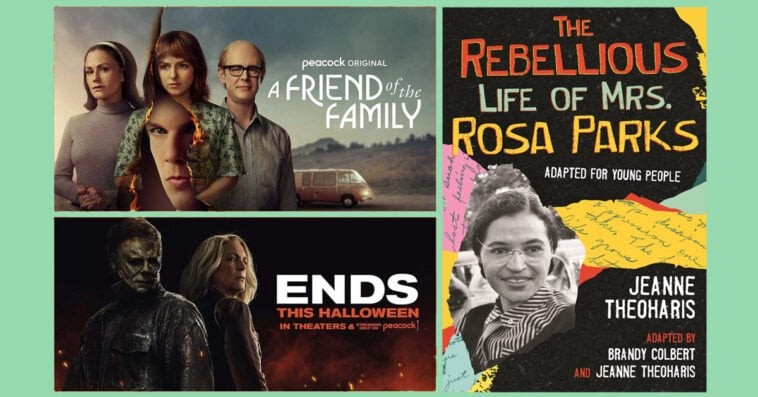 The complete list of new titles arriving on Peacock this October has been unveiled, and it looks like the streamer is bringing all the Halloween Horror its subscribers need.

Halloween Ends is the most hotly anticipated title among all the new content coming to the NBC-owned streaming service next month.

Premiering in theaters and on Peacock simultaneously on October 14th, the film is the epic conclusion to the Halloween franchise.

Set four years after the events of 2021’s Halloween Kills, Halloween Ends finds Laurie Strode (Jamie Lee Curtis) living with her granddaughter Allyson (Andi Matichak) and finishing writing her memoir. Michael Myers hasn’t been seen since. Laurie, after allowing the specter of Michael to determine and drive her reality for decades, has decided to liberate herself from fear and rage and embrace life. But when a young man, Corey Cunningham (Rohan Campbell), is accused of killing a boy he was babysitting, it ignites a cascade of violence and terror that will force Laurie to finally confront the evil she can’t control, once and for all.

While waiting for Halloween Ends to debut on Peacock, subscribers can actually enjoy a bunch of non-original horror films on the platform’s Halloween Horror Hub. Starting October 1st, popular horror films like Insidious, Saw and Psycho will be available to stream. Subscribers will also get access to several movies from the Child’s Play, Monster High, and Leprechaun franchises at the start of the month.

The New on Peacock list for next month also includes The Godfather trilogy, the Taken trilogy, and a couple of films from the Bourne movie franchise. All of these will be added to the streamer’s library on October 1st.

On the scripted series front, Peacock is launching the drama miniseries A Friend of the Family. Based on true events, the show follows Robert Berchtold (Jake Lacy), a close friend of the Broberg family, who kidnaps Jan Broberg (Mckenna Grace) multiple times over the years. The nine-episode limited series will premiere with its first three episodes on Peacock on October 6th, with succeeding episodes arriving on the streamer every Thursday.

Several scripted series will also continue their respective runs on Peacock in October. These include the soap opera Days of Our Lives, the thriller series Symone, and the supernatural drama Vampire Academy.

The streamer is also closing its DocFest next month with the release of the following documentaries: Prince Andrew: Banished, I Love You, You Hate Me, and The Rebellious Life of Mrs. Rosa Parks.

Dropping on October 5th, Prince Andrew: Banished unpacks the tumultuous story of how Prince Andrew, Duke of York — formerly regarded as the attractive, beloved son of Queen Elizabeth II and decorated naval officer — whose behavior antics throughout his career as a Royal brought scandal and disgrace to the 1200-year legacy of the British Royal Family.

I Love You, You Hate Me, meanwhile, is an exploration of the spectacular rise and violent response to the children’s show character Barney the Dinosaur. Set to premiere on October 12th, this docuseries traces Barney’s grassroots beginnings, from the explosion of international Barneymania to the eventual backlash the purple dinosaur received.

Lastly, The Rebellious Life of Mrs. Rosa Parks expands the record on the overlooked accomplishments of the titular activist and the importance of her drive and fight to overcome racial injustices and rampant inequalities. The film is coming to Peacock on October 19th.

Sunday Night Football, Notre Dame Football, and Premiere League will continue to stream on Peacock in October, along with golf from the PGA Tour and LPGA Tour.