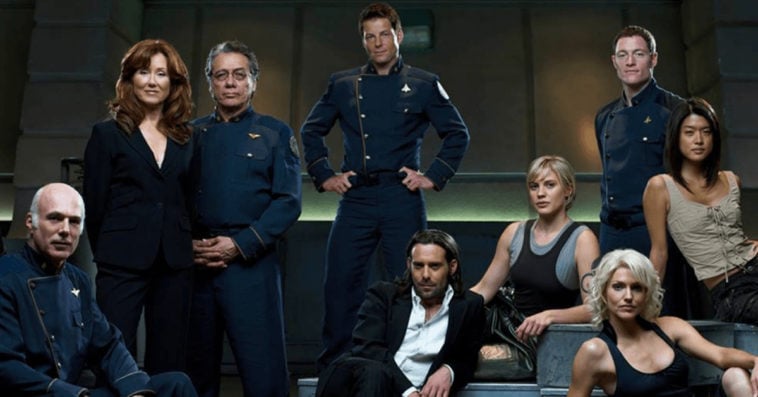 Peacock will launch in April 2020, and Esmail’s straight-to-series Battlestar Galactica project will be part of the streaming platform’s initial content lineup.

Plot details about new show are being kept under wraps, but sources told The Hollywood Reporter that it will be a more modern take at the world of the beloved sci-fi franchise and will be inspired by Syfy’s 2004 Battlestar Galactica series, developed by Ron Moore, and not based on the 1978 original from creator Glen A. Larson.

To make things clearer, Esmail tweeted on Tuesday that the new series will not be a remake of Moore’s Battlestar Galactica, but a new story within the mythology that will stay true to the spirit of the franchise.

BSG fans, this will NOT be a remake of the amazing series @RonDMoore launched because… why mess with perfection? Instead, we’ll explore a new story within the mythology while staying true to the spirit of Battlestar. So say we all!

Esmail will executive produce the series with his manager Chad Hamilton at Anonymous Content. A writer has yet to be hired for the series, which hails from Universal Content Productions, where Esmail remains under an overall deal.

Larson’s original Battlestar Galactica, which starred Lorne Greene, Richard Hatch and Dirk Benedict, aired on ABC for one season before being canceled. A fan campaign to revive the show resulted in a 10-episode spinoff called Galactica 1980.

Moore’s Battlestar Galactica, meanwhile, started with a three-hour miniseries in 2003 that served as a backdoor pilot for the 2004 series that went on to run for four seasons from 2004 to 2009. Starring Edward James Olmos, Mary McDonnell, Katee Sackhoff, James Callis, Tricia Helfer and Grace Park, the show was acclaimed by critics and viewers alike that it spawned the single-season prequel Caprica and the web series Battlestar Galactica: Blood & Chrome, which was later re-cut as a TV movie.

The original Battlestar Galactica told the story of the Twelve Colonies of Mankind and its thousand-year war against the robot race known as Cylons. When humanity was ultimately defeated in a sneak attack on their homeworlds by the Cylons, the last remaining capital warship, the Battlestar Galactica, led what remained of humanity on a quest to find the long lost thirteenth tribe of humanity that had settled on Earth. The Cylons, however, continued to pursue them relentlessly across the galaxy.

In addition to Esmail’s new Battlestar Galactica series, a Battlestar Galactica movie from director Francis Lawrence is also in development. It’s unclear, however, if the new series would have any bearing on the big-screen project. There has been no update on the status of the movie since it hired a new screenwriter in December 2018.