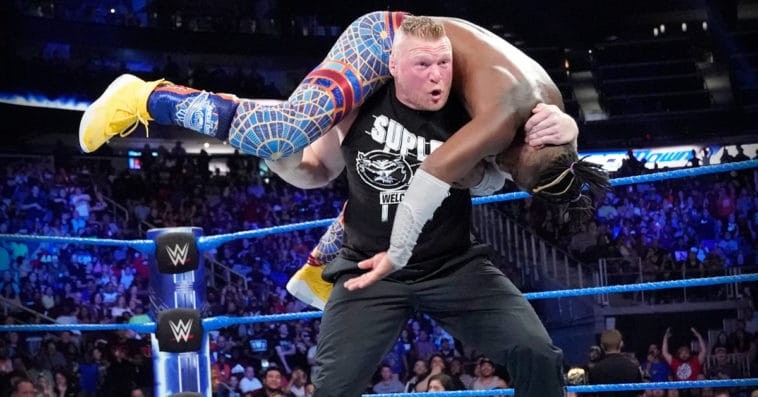 Peacock will be the exclusive streaming home of WWE Network in the U.S. starting March 18th.

As part of a multi-year agreement announced on Monday, WWE Network’s existing U.S. subscribers will be migrated over to Peacock, where they will continue to get access to WWE content.

On March 18th, Peacock will begin the rollout of more than 17,000 hours of new, original, and library WWE Network programming on-demand and on a 24/7 channel. This includes all WWE live events like WrestleMania and SummerSlam for no additional fee. Fastlane will be the first WWE pay-per-view to stream on Peacock on March 21st. Fans who would prefer to order events via traditional pay-per-view will still have that option.

Original series like Steve Austin’s Broken Skull Sessions, Undertaker: The Last Ride, and WWE Icons will also be available on Peacock’s WWE Network, as well as in-ring shows like NXT, NXT UK, and WWE 205 Live. There will also be replays of Raw and SmackDown, as well as WWE Network archives, including every WWE, WCW and ECW pay-per-view event in history

Documentaries like WWE 24, WWE Untold, and WWE 365 will also be included on Peacock’s WWE Network, which will also stream one signature documentary annually starting 2022.

Raw on USA Network and Smackdown on Fox will continue to air as usual, as the deal between Peacock and WWE Network won’t impact those shows. WWE Network will also continue to operate on its own overseas, so nothing will change for the platform’s subscribers outside the U.S.

Financial terms and the exact length of the deal between Peacock and WWE Network were not revealed but the Wall Street Journal reported it’s a five-year contract “valued at more than $1 billion.”

Since WWE Network’s move to Peacock means that its existing subscribers will pay 50% less per month, fans are generally happy about the news:

On the one hand Parks and Rec and all the WWE content will be on Peacock. On the other –

Nope, I don’t see a downside. Smells like a great deal to me! pic.twitter.com/jaGaLdMNZx

The Office and WWE on the same platform. pic.twitter.com/EfWyt6pWD1

I’m excited about this. I wasn’t going to buy Peacock ?, but now I’ll move my $9.99 WWE Network subscription to it and still have that plus the ad-free Peacock content. As Michael & Pam would say, that’s a win-win-win! ?

However, several subscribers have some questions and concerns about the transition.

Can we watch @WWE PPVs with the $4.99 premium plan or we need the $9.99 premium plus tier? Starting March 21st with #WWEFastlane

What does this mean for the WWE app? Do we just need the peacock app going forward in march @AskWWENetwork?

So I have peacock premium through my cable company for free, but I have the network. Which do I cancel so I don’t pay double?

If we are on an annual deal for premium can we upgrade to premium plus?

Okay, but can we get peacock on Amazon fire sticks?

Are you able to watch live events on delay at all and pause/rewind/fast forward in a flexible way? Worried that Peacock will be more rigid for live PPVs than the Network was.

I’m excited but please make the app more stable. I get buffering issues with Peacock all the time and the @WWENetwork doesn’t have any

Though Peacock and WWE Network currently don’t have answers for some of those questions, the companies said they will share more details about the move ― including concerns about managing customer accounts ― closer to WWE Network’s launch on Peacock in March.