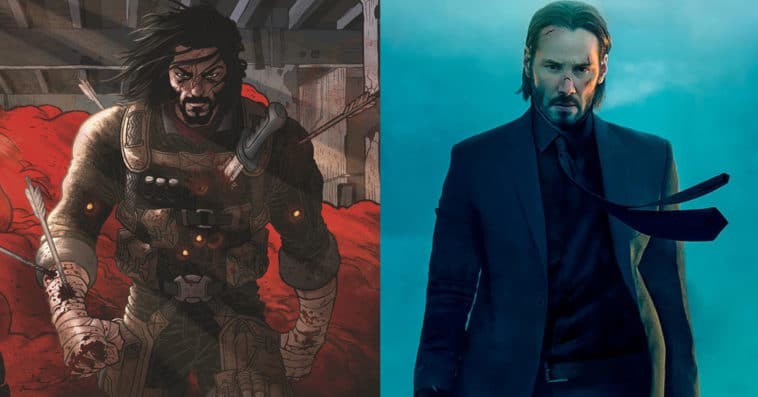 A movie and an anime series based on Keanu Reeves’ comic book BRZRKR are in the works at Netflix.

The streaming service announced on Monday that it has secured the rights to the BOOM! Studios-published comic and will first adapt the story into a live-action film, followed by an anime spinoff series.

The feature will adapt the comic, which is intended to run for 12 issues with three arcs of four issues each, while the anime series will explore different elements of the BRZRKR universe.

Reeves will star in both screen adaptations and will produce the two projects alongside Ross Richie and Stephen Christy for BOOM! Studios as well as Stephen Hamel for Company Films. Adam Yoelin of BOOM! Studios, which has a first-look deal for live-action and animated series with Netflix, will serve as executive producer.

Based on an original idea by Reeves, BRZRKR is co-written by the John Wick star and New York Times bestselling writer Matt Kindt. It is illustrated by Marvel artist Ron Garney with colors by Bill Crabtree, letters by Clem Robins, and character designs and covers by Rafael Grampá.

According to BOOM! Studios and Netflix, BRZRKR is a “brutally epic saga about an immortal warrior’s 80,000-year fight through the ages. The man known only as ‘B’ is half-mortal and half-god, cursed and compelled to violence, even at the sacrifice of his sanity. But after wandering the earth for centuries, B may have finally found a refuge — working for the U.S. government to fight the battles too violent and too dangerous for anyone else. In exchange, B will be granted the one thing he desires — the truth about his endless blood-soaked existence … and how to end it.”

In an interview with Entertainment Weekly earlier this month, Reeves said that the idea for BRZRKR came to him around four years ago. “The idea came from me in the sense of wanting to have a character that could punch through someone’s chest and come out of their back,” said the actor. “Or a fight sequence where they could rip someone’s arm off, or cleave someone in half. It came to me in this milieu of a berserker battle scene, and that was probably around 2017.”

He continued: “I was originally thinking of it as a movie character, but then I went to a meeting with the folks at BOOM! Studios. I grew up reading comics and loving comics, and they were also looking to develop live-action stuff. So they asked me if I had anything going on. I told them this story, and then they said, ‘oh okay, well, did you ever think of it being a comic book?’”

Launched last March 3rd, the first issue of BRZRKR has already sold more than 615,000 copies, making it the highest-selling launch in almost 30 years outside of Marvel’s Star Wars #1 in 2015. Check out the official comic trailer for BRZRKR featuring Reeves’ voice below:

Last year, Reeves completed production on The Matrix 4, which now has a December 22nd, 2021 release date. This spring, the actor is set to start filming John Wick 4, which is currently scheduled for a May 27th, 2022 opening date.