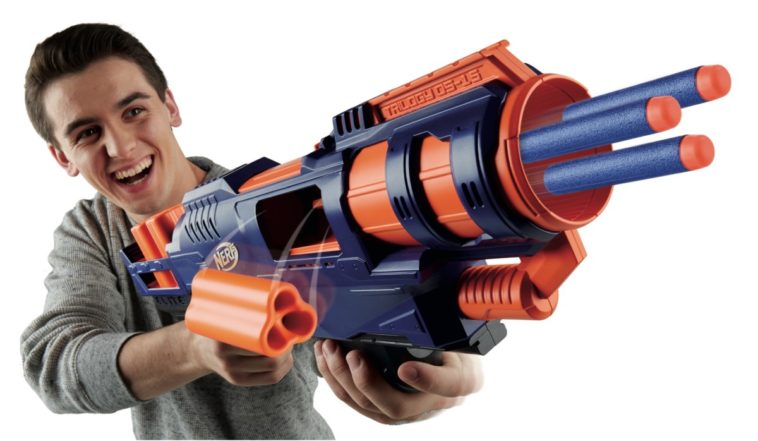 With more than 4,000 kids and adults participating, Jared’s Epic NERF Battle currently holds the Guinness World Record for the largest blaster battle. During this year’s Epic NERF Battle in Arlington, Texas, Hasbro decided to unveil a slew of new blasters set to be released later this year.

Headlining the list is the company’s Jupiter XIX-1000. This top-of-the-line Edge Series blaster is a bolt-action rifle with a 10 round capacity. Designed with accuracy and range in mind, the Jupiter XIX-1000 is perfect for dedicated NERF marksman.

A clear window on the side allows you to see how many rounds you have remaining, the safety trigger prevents the blaster from accidentally firing, and the adjustable bipod holds the blaster steady as you take down your opponents. The Jupiter XIX-1000 is recommended for kids 14 and over – and is expected to retail for $70.

While the Jupiter XIX-1000 shoots NERF Rival ammunition at a whopping 90 feet per second, the company’s Trilogy DS-15 is a pump-action blaster that fire shells. According to NERF, each shell is designed to shot up to three darts at once, and considering the gun is built to hold up 5 shells in its stock, that’s a heap of firepower. Because the darts don’t come flying out at 90FPS like the Jupiter XIX-1000, the DS-15 is generally considered safer. Hasbro recommends the DS-15 for kids ages 8 or older. The blaster will retail for $35.