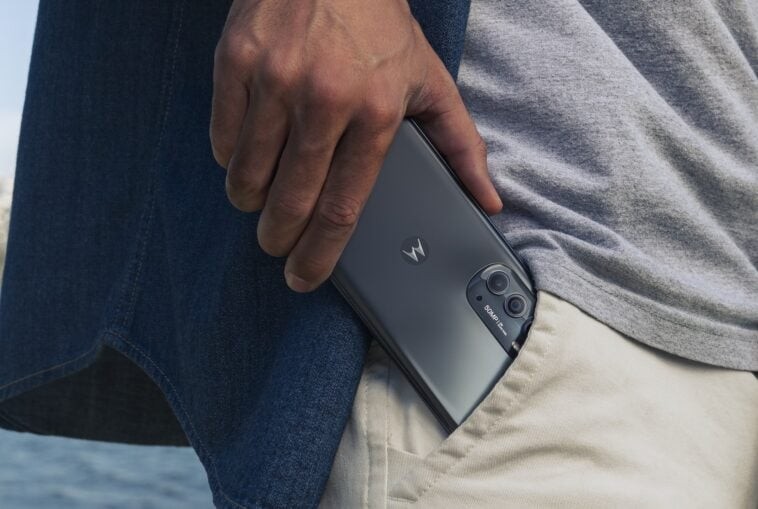 Once again, Motorola is targeting the mid-range segment with its new Motorola Edge (2022), meaning it competes directly with the likes of the Pixel 6a.

Design-wise, the 2022 Motorola Edge doesn’t look much different than its predecessor, but internally, much has been improved – including everything from its camera, to its chipset, and its display.

As Motorola’s first carbon-free device, the company will ship the Motorola Edge (2022) in 100% plastic-free packaging that is expected to reduce plastic waste by 5.7 tons and CO2 emissions by 83.40 tons. In an effort to achieve a carbon-free status, Motorola will also purchase carbon offsets to compensate for the rest of the device’s carbon footprint.

The smartphone is powered by a faster chipset than the 2021’s Motorola Edge – MediaTek’s latest Dimensity 1050 chip which supports 5G and Wi-Fi 6 support.

Ready For Wireless allows users to connect to larger displays, like TVs, to amplify the Motorola Edge experience. This feature allows users to take advantage of the advanced performance of MediaTek’s Dimensity processor on a larger screen while gaming, making video calls, and so forth.

Ready For PC, as the name implies, lets you integrate your device with your desktop to unlock higher productivity levels.

The Motorola Edge (2022) features a 6.6-inch OLED display with a speedy 144Hz refresh rate. When it comes to audio, the 2022 Motorola Edge combines Dolby Atmos technology and two stereo speakers.

The Motorola Edge (2022) is equipped with a 50MP primary camera that provides 4x light sensitivity by combining 4 pixels into one large ultra-pixel and a 13MP ultrawide lens on the rear. It also sports a 32MP selfie camera. The primary camera can capture 4K footage at 30fps while the rear micro camera captures FHD footage at 30 and 60fps.

Running on MediaTek’s Dimensity 1050 chip, the Motorola Edge offers better battery efficiency than its predecessor. Motorola goes so far as to claim that the device’s 5,000mAh battery can provide up to 2 days of life.

When the Motorola Edge’s battery drains, you can charge it up in minutes using 30W TurboPower charging, 15W wireless charging, or 5W reverse charging.

The device comes in 256GB or 128GB storage variants, and you can choose between 6GB or 8GB of RAM. Customers will also get 100GB of free Google One access for 12 months.

The Motorola Edge will come running Android 12, with 3 years of guaranteed OS upgrades, and monthly security updates for 4 years.

The Motorola Edge (2022) has a limited-time launch price of $499, and is set to be launched in the U.S. in the next few weeks, starting with T-Mobile. The smartphone will later be available at AT&T, Verizon, Spectrum Mobile, UScellular, and Visible. It will also be available unlocked at Amazon and Motorola.com.

This time around, the Motorola Edge seems worthy of its $499 price tag. However, after the initial promotion period, the phone will jump up in price to $599. For $599, we would recommend spending an extra $50 and going with the speedier OnePlus 10T.