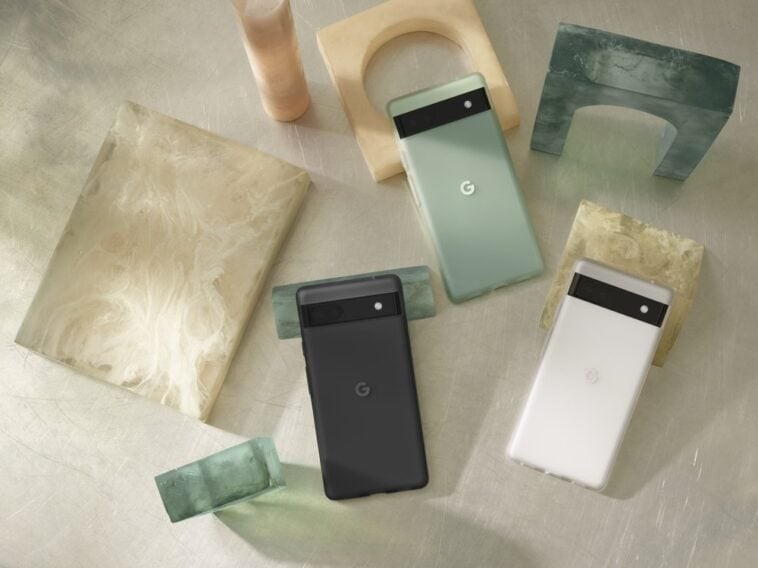 The Google Pixel 6A comes in chalk, charcoal, and sage

The Google Pixel 6A is officially here and with the same price tag of $449 as the Pixel 5A from last year.

Announced at this year’s Google I/O, the Pixel 6A implements the same design principles as the Pixel 6 Pro, such as the camera bar and the Google Tensor processor. But the Google Pixel 6A is the smallest of the Google phone lineup, featuring a 6.1-inch display. Also, the 6A adopts an OLED panel as opposed to the AMOLED display found on the Pixel 6 Pro.

The phone is available in a choice of Chalk, Charcoal, and Sage, all pretty neutral hues but the company will be offering special translucent cases that can be mixed and matched with the phone’s colors to create all sorts of color combinations.

A Google Tensor chip is what powers the Pixel 6A. It comes in a single configuration offering 6GB of RAM and 128GB of internal storage.

The Tensor chip also optimizes the 6A’s 4140mAh battery so it can last longer. And with the new Extreme Battery Saver mode, Google says the phone can last up to 72 hours.

When it comes to cameras, while the Pixel 6A has the same Camera Bar on the back, but the configuration itself is different from the Pixel 6 and Pixel 6 Pro models. To that effect, the Pixel 6A comes with a 12-megapixel main camera and a 12-megapixel ultrawide camera. For selfies, the phone has an 8-megapixel front-facing camera.

On the software side of things, Google has made sure to bring back well-loved camera features such as Real Tone for accurate skin color, Night Sight, and an updated Magic Eraser that now lets you change the color of objects aside from just erasing them.

We’re glad to see that Google has also installed its Titan M2 security chip which offers the same security architecture as its Pro variant.

Material You UI is still the company’s choice, as expected, and the 6A is already confirmed to receive five years of security updates. Being a Google phone, it will also be one of the first devices to receive Android 13 updates. There are going to be Feature Drops for this device as well.

The Google Pixel 6A will be available for pre-order starting July 21st and you can get it at stores starting July 28th in select countries. In the U.S., aside from being available unlocked, AT&T will be offering the device.