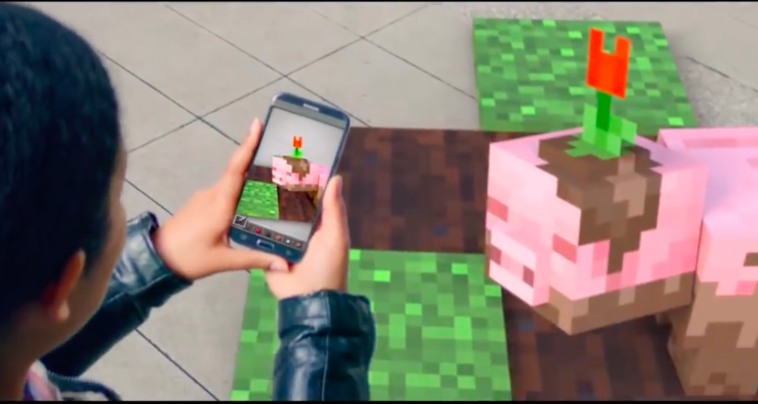 For Minecraft’s 10-year anniversary, a lot of cool new stuff has been in the works. One of them appears to be a new Minecraft AR game that’s playable on smartphones.

It may seem like the game has only been out for a few years at most, but it existed way before Microsoft bought it for $2.5 billion. Now that Minecraft is about to celebrate its 10th anniversary, it has been re-released for free and can be played on a web browser, and it may be about to make its way onto the streets.

If a teaser from Microsoft’s Build developer conference is to be believed, then an entirely new version of the game that’s running in Augmented Reality is about to hit smartphones quite soon. Microsoft kind of nonchalantly revealed it at the end of one of its keynotes.

In the video reveal, Saxs Persson, Minecraft’s creative director, leaves his phone on a bench before a passerby picks it up to look at it. The person ends up seeing Minecraft running in AR, although she doesn’t do anything or interact with it.

For now, Microsoft hasn’t shared any other details about this intriguing project and hasn’t shown anything else apart from the teaser. However, it is noted that more information will be provided on May 17th, the day of the game’s 10-year anniversary.

Is it going to be a new AR game for Android? Will it also be available for iPhones? All will be revealed in about 10 days as Microsoft celebrates Minecraft’s 10th anniversary.