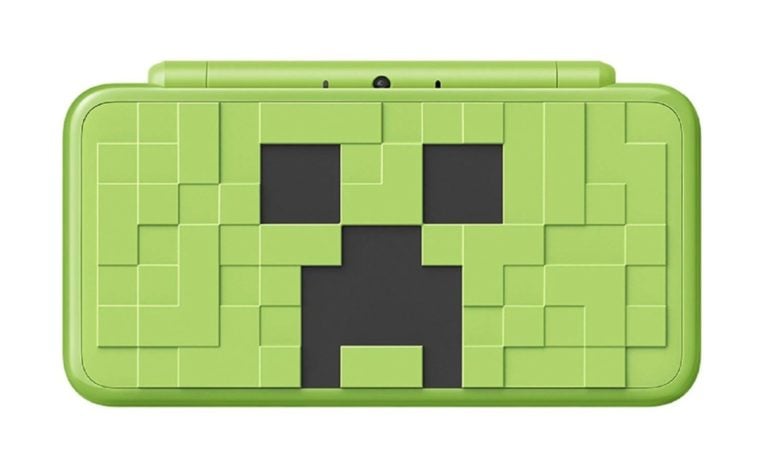 Diehard Minecraft fans are giddy with anticipation as they eagerly wait for Nintendo to release their latest joint venture with Microsoft. The Japanese gaming behemoth is preparing to launch a trio of themed 2DS XL handheld gaming systems, but it’s the Minecraft-inspired device that’s receiving all of the praise.

Microsoft owns the intellectual property rights for all things related to Minecraft. Up until this point, the “big three” console makers have fostered a spirit of competition instead of collaboration. This approach has slowly started to erode as Microsoft and Nintendo have recently begun to develop a constructive business partnership.

Nintendo’s new, Minecraft “Creeper” Edition 2DS XL is just the latest collaboration from the pair of gaming powerhouses. The forthcoming handheld gaming system revolves around a slimy-green color and cubic-design that prominently features Minecraft’s iconic Creeper mob. Fans of the franchise will know Creeper as the hostile mob that has a bad habit of exploding when you get too close. According to Polygon, Mojang – the original company behind Minecraft – may have also played a role in the device’s design.

This most recent joint project arrives shortly after Nintendo released an updated version of Minecraft for Switch that allows cross-platform play with Xbox One users. Notably absent from all the fun and cooperation is Sony. In fact, when it comes to games such as Fortnight, they’ve gone as far as banning Nintendo Switch users from accessing their online services. Moreover, Sony bars their own PS4 users from cross-platform play with certain competing consoles (i.e. Xbox One and Switch). Interestingly, they do allow interoperability with PC and select mobile platforms.

Each of the thematized 2DS systems in the lineup will come with the corresponding video game preinstalled. If Minecraft is not your taste, you’ll be pleased to know there’s also an Animal Crossing version as well as a Mario Kart 7 bundle.

According to Microsoft Central, the official release is set for August 2, 2018, in Japan, however, there’s yet to be an announcement pertaining to the potential North American launch.