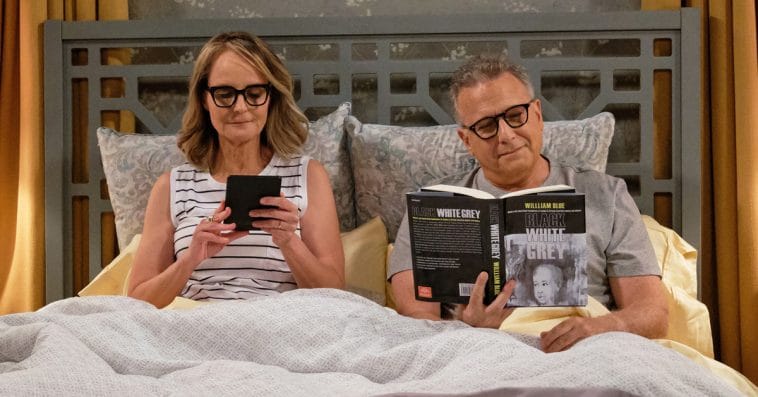 Twenty years after concluding its seven-season run on NBC, Mad About You has returned to the small screen in the form of a limited series on Spectrum Cable.

The twelve-episode revival brings back Paul Reiser and Helen Hunt as husband and wife Paul and Jamie Buchman. The time-hopping finale of the sitcom’s original run saw Paul and Jamie splitting up before ultimately reconciling with the help of their adult daughter Mabel (Janeane Garofalo). The revival, however, disregarded the original ending, as Mabel (now played by Abby Quinn) is just entering college in the new series.

Mabel is heading off to start the next chapter of her life at New York University, and though campus is literally five blocks from the Buchmans’ apartment, Mabel’s moving out is a big moment for the couple. While Paul admits that he feels a little bit empty with their daughter leaving home, Jamie conceals her feeling of longing, until she can’t hide it anymore.

To incorporate Mabel into the show, the first episodes of the revival often find Paul and Jamie visiting Mabel’s dorm room. But when the couple finally accepts that their daughter is just doing fine at school, the show focus comes back to where it has always been best at: the banter and the bickering between Paul and Jamie.

Making the revival extra special is the return of some of the show’s original supporting cast, including Richard Kind as Dr. Mark Devanow, John Pankow as Ira Buchman, Anne Ramsey as Lisa Stemple, and Jerry Adler as Mr. Wicker. But as is so often true with other classic sitcoms that have returned to TV, the Mad About You revival is pretty much the same as the original after its “nostalgia” factor wears off.

With that said, the new Mad About You series is what fans of the original have hoped for from a revival even if it feels unnecessary and redundant.

The first six episodes of the Mad About You revival debuted on November 20th on Spectrum On Demand, with the second half of the series arriving on December 18th.