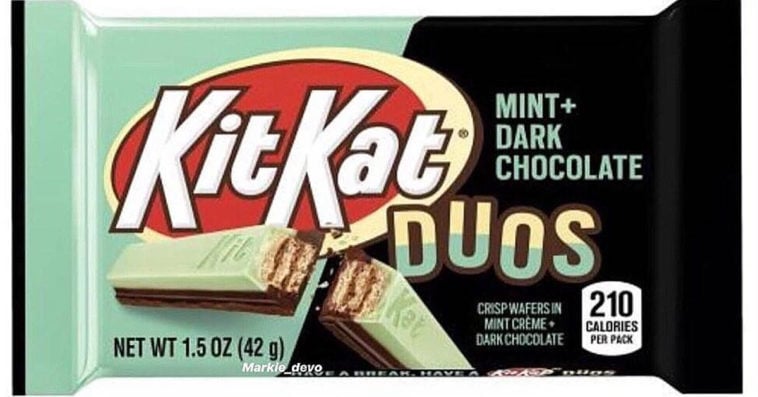 If you love mint and dark chocolate, then Kit Kat’s alleged new flavor might be your next favorite snack.

In an Instagram post last April 14th, foodie Markie Devo revealed that Hershey’s is releasing the first new Kit Kat flavor in the United States in several years. Called Kit Kat Duos Mint + Dark Chocolate, this wafer bar appears to have a mint créme coating on top and a dark chocolate coating on the bottom. Though each bar also has layers of chocolate inside, it’s unclear whether these are dark chocolate or milk chocolate.

According to Devo’s post, these new Kit Kat bars will hit the shelves this December, which actually makes sense as this is traditionally the month when snack and confectionery brands roll out their mint-flavored treats for the holidays.

Although we have just passed minter, it does not mean we can’t plan for . This is the upcoming @kitkat Duos. A mint & dark chocolate mixture with those wafers we oh so love. I do like me some mint in moderation and dark chocolate always. This will hit stores in December, just in time for minter❄️?❄️.. How do we feel about this drop?? #food #newfood #junkfood #macros #cheatmeal #cheatsnack #snacks #yum #kitkat #kitkatduos #mmm #fatman #candy #cake #f52grams #exclusive #comingsoon #winter2019 #minteriscomingjk

Though Hershey’s hasn’t confirmed the new Kit Kat flavor yet, lots of fans can’t wait to get a taste of the new treat. After all, the United States only has very limited Kit Kat flavors to choose from. At present, the country’s Kit Kat flavor selection only includes original, strawberry, white, and dark chocolate.