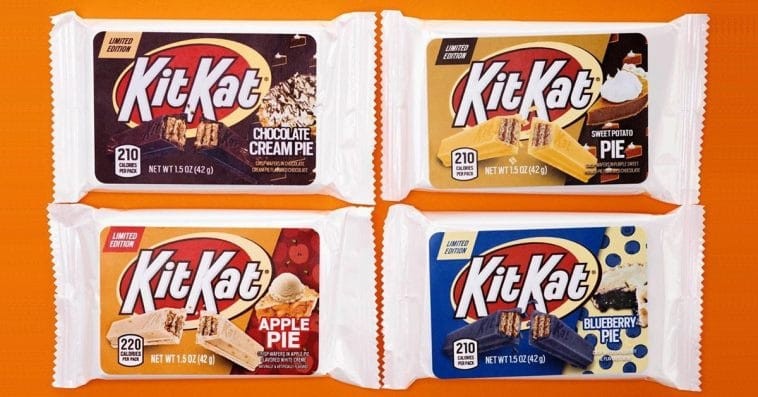 2019 isn’t over yet, but that hasn’t stopped Kit Kat from giving sneak peeks at what it has in store for its fans in the coming new year.

According to Instagrammer The Junk Food Aisle, Kit Kat shared photos of its upcoming flavors to its Instagram story on Thursday, and these include Blueberry Pie, Sweet Potato Pie, Apple Pie, and Chocolate Cream Pie.

The Junk Food Aisle wrote that Kit Kat didn’t release any details about the yet-to-be-released flavors, but Instagrammer Snack Santa — who also shared a similar picture of the products on social media — reported that the new variants will be hitting the shelves in 2020.

The Birthday Cake flavor, meanwhile, was leaked on November 14th by Instagrammer Junk Food Leaks, who also got to taste it. “The Kit Kats themselves are a bit harder, as milk chocolate and confection are different, but moving past that, you’re delighted to impeccable crunch, and flashbacks to eating spoonfuls of funfetti cake frosting right out of the jar,” read a portion of Junk Food Leaks’ review.

Over a week later, Junk Food Leaks posted his review for the Apple Pie flavor, which is already a big hit in Japan. “They’re not as artificial as many apple pie products out there,” Junk Food Leaks wrote of the sweet treat. “It has a great crunch in the center, which many do not. And of course, it does embody some actual authentic apple flavor! I do think that while tough, stuffing a bit of dried apple in these things would be the one thing that would make them truly amazing.”

A number of news outlets have already reached out to Hershey’s to know the release window for the new flavors, but the chocolate manufacturer has yet to respond.