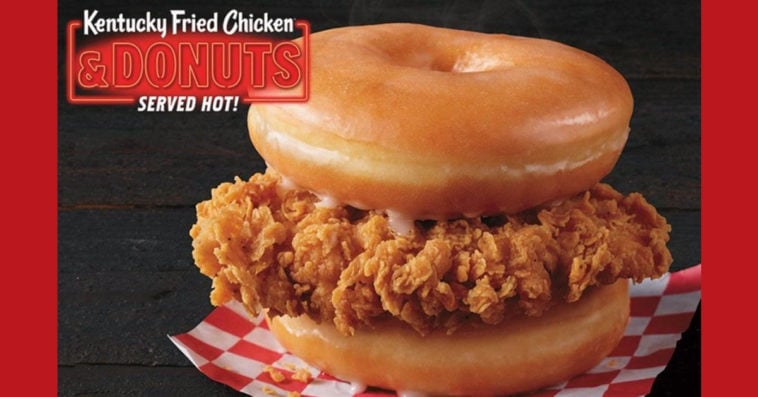 KFC is trying to capitalize on the ongoing chicken sandwich craze with its new “Chicken and Donuts” menu items.

The fast food restaurant chain announced on Tuesday that it is testing a couple of new offerings that pair fried chicken and glazed donuts at more than 40 locations in Norfolk and Richmond, Virginia, and Pittsburgh.

KFC has announced that it will be testing a new combination of fried chicken and glazed doughnuts. The new items will be sold for a limited time, and aren't nationally available just yet: only in Pittsburgh and two Virginia cities — Norfolk and Richmond. https://t.co/58MQiazcl1

There are two options to choose from: a chicken and donut basket meal which includes chicken tenders or bone-chicken plus one or two donuts; or a chicken sandwich composed of a chicken patty between two donut buns.

The chicken-and-donut basket meal costs $5.50 for one donut and $7.50 for two donuts. The sandwich, meanwhile, costs $6 when ordered a la carte, and $8 as a combo meal. Customers can also add a donut to any meal for $1.

A rep for the chain said that the donuts arrive at stores already cooked, and when a customer orders them, the donut will be dipped in the fryers and glazed with a vanilla icing to make sure that they are hot and fresh when served.

Despite the tempting look of KFC’s “Chicken and Donuts” menu items, lots of people on social media find them disgusting; with some bluntly tweeting that they have no plans of trying them.

OMG. That made me throw up a little.

There is no way I can eat that. I’m 40. Those donuts and chicken would stay attached to my hips until at least 55

Wonder why there’s an obesity problem? ?. Here’s a tip, if it’s beige, don’t f’ing eat it. Real food isn’t beige. This is disgusting. ?

Though most people know the health risks this food combo poses, there are still a few who have expressed their interest in tasting the new menu items.

It’s one-upping chicken and waffles and I am all for it!

While the testing came just a few weeks after the successful launch of Popeyes’ chicken sandwich, KFC pointed out in a press release that the introduction of the “Chicken and Donuts” to its menu is just “part its food innovation strategy” and is inspired by the “Chicken & Donuts trend has been gaining popularity, but mostly on a local level in areas like Philadelphia, San Diego, and Portland.”

If the test goes well, KFC said that the “Chicken and Donuts” menu items could be released on a national level.