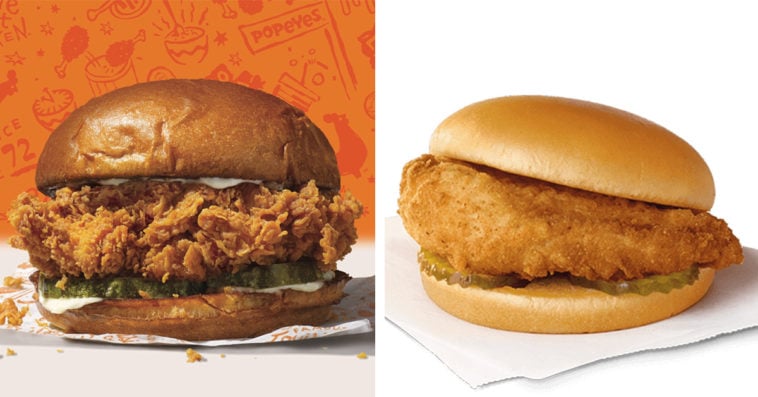 On Monday, Chick-fil-A — the biggest chicken chain in the U.S. by sales — seemingly alluded to Popeyes’ chicken sandwich in a tweet that promotes its own version of the snack: “Bun + Chicken + Pickles = all the [heart] for the original.”

Seemingly assuming that Chick-fil-A is threatened by the newest chicken sandwich in town, Popeyes replied to Chick-fil-A’s tweet with a cunning response.

Though Chick-fil-A did not respond, other restaurant chains like Wendy’s and Shake Shack joined in the discussion to hype up their own chicken sandwiches.

Y’all out here fighting about which of these fools has the second best chicken sandwich. pic.twitter.com/4v9RJFgy0T

If you're lookin' for a chicken sandwich (without the beef ?), you know where to find us. pic.twitter.com/2wtV2POvFf

Popeyes is superior to you. pic.twitter.com/YmzBs0Jgf7

That Popeyes sandwich got y’all sweating

In your case, bun + chicken + pickles = homophobia. No thanks. And Popeye’s is much better.

Apparently, the growth of Popeyes’ social media following reflects the increase of its in-store sales. “Many of our restaurants have seen a high demand for the sandwich, with guests excited to give it a try,” Popeyes spokeswoman Dara Schopp said in a statement. “A few restaurants have temporarily sold out of the sandwich, and we are working to make sure they receive more as soon as possible.”

However, despite all the positive reception to Popeyes’ chicken sandwich, it’s too early to tell if it will drive traffic to the fast-food chain in the long run and if it will ever help Popeyes’ sales catch up to Chick-fil-A’s.