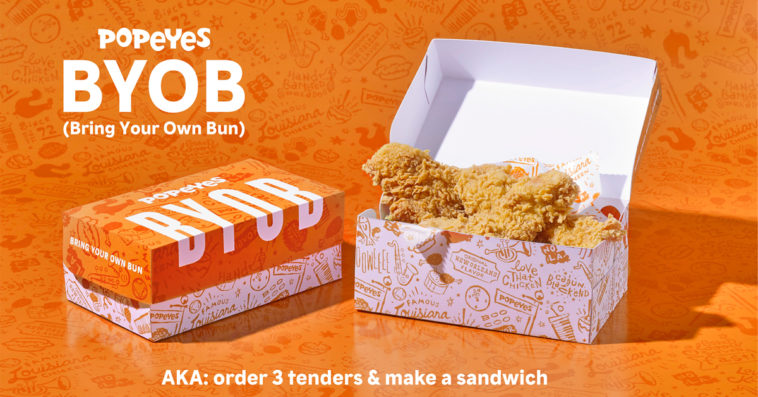 While Popeyes is still working to get its sought-after chicken sandwich back to its restaurants across the country, the fast food chain has come up with a way that could help customers ease their cravings in the interim.

Called BYOB (Bring Your Own Bun), the campaign allows guests to bring their own buns to any Popeyes outlet, order the chain’s three-piece tenders, and make their own chicken sandwiches right there on the spot.

Try our new BYOB! It’s basically The Sandwich! Only no mayo. Or pickles. And you bring your own bun… Really it’s just three tenders… pic.twitter.com/9jOFyfdae4

“While we work to get the sandwich back in our restaurants, we wanted to offer our guests a fun way to satisfy their Popeyes sandwich cravings,” said Bruno Cardinali, Popeyes’ head of marketing for North America, in a statement to CNN.

Cardinalli added that Popeyes still has “the best fried chicken in the game” and hopes this substitute will help assuage the cravings of fans.

To better inform customers about what exactly the BYOB campaign is, Popeyes posted a video commercial on its social media sites on Thursday. In the 30-second clip, a number of people acting as customers are seen reacting very negatively to the BYOB policy, with Popeyes seemingly taunting them through a series of sarcastic slides.

For instance, when one customer asks “And I have to bring my own bun?”, the clip cuts to an oddly cheeky slide that reads “That’s what BYOB means…”

Apparently, people on Twitter had pretty similar reactions with the customers in the commercial, with a lot of them pointing out that BYOB is not a funny joke.

They said bring your own buns!? pic.twitter.com/r6y3tL7JbR

Fire whoever came up with this idea. I don’t care if it’s a joke. Fire them.

Meanwhile, other customers seemed to have grown impatient and just decided to go to Chick-fil-A instead.

@PopeyesChicken says to BYOB (bring your own bun) ? @ChickfilA always has buns! ?

Not everyone on social media was upset though; some just really wanted to get a taste of the much-talked-about chicken sandwich. But unfortunately for them, Popeyes has yet to announce when exactly the item will be returning to the menu.