The Huawei MateBook 13 outshines the new MacBook Air in most areas. It also offers a better value for your money. But it’s not perfect.

When Huawei came out with the MateBook X Pro last year, reviewers and users were pleasantly surprised by just how exceptional a laptop it is. Personally, I compared it to being the PC’s answer to the MacBook Pro. New for 2019, Huawei is taking on the 2018 MacBook Air with their MateBook 13. The Huawei MateBook 13 looks a lot like the MacBook Air and offers similar specs, but it’s priced more competitively than the MacBook Air. I’m personally a MacBook Air owner, so reviewing the MateBook 13 has been an eye-opening experience. 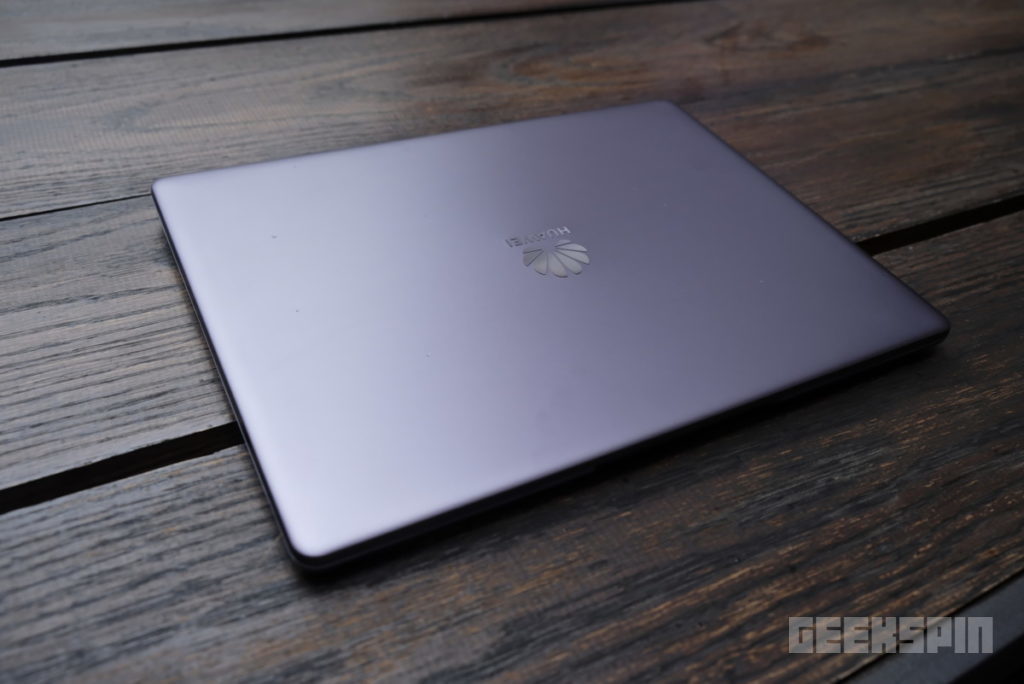 But before I compare apples to orange, I need to point out that the MateBook 13 automatically one-ups the new MacBook Air by being more petite. Specifically, it’s 6% smaller than the latest MacBook Air. It’s also thinner – measuring 14.9mm versus the 15.6mm MacBook Air. That might not seem like much on paper, but the MateBook 13 is noticeably more petite than the MacBook Air when you handle it. It certainly takes up less space in your bag than the wider Air does. As a matter of fact, its form factor is more comparable to the MacBook 12.

With all of that said, while the MateBook’s design is certainly attractive and clean, it’s pretty much a been there, seen that design. Furthermore, while the all-aluminum build quality of the MateBook 13 is very good, it just doesn’t feel quite as solid as the new MacBook Air or as solid as Huawei’s own MateBook X Pro. When it comes to heft, the MateBook 13 weighs in at 2.86lbs which is a smidgen heavier than the 2.75lb MacBook Air (Late 2018).

The FullView (2160×1440 resolution, 300 NITS ) touchscreen display on the MateBook 13 is unsurprisingly excellent. Visuals are sharp and vibrant and on par with what we would expect from a laptop in this price range. Placing it side by side with the MacBook Air, both displays are very much on par with each other, but the MateBook 13 is able to edge out the MacBook Air by being slightly brighter at 300 nits vs the Air’s 291 nits.

That said, Huawei has chosen an interesting and somewhat unusual 3:2 aspect ratio as opposed to a 16:9. Huawei explained to us that this is the ideal aspect ratio for productivity. Indeed, 3:2 works well for surfing websites. Windows Central has a great article which explains the benefits of using a 3:2 display and why they’re hoping for it to become the new defacto standard.  That said, I’m so used to using a widescreen aspect ratio, that it has taken some time to get used to the 3:2 aspect ratio on the MateBook 13.

When you consider that the new MacBook Air costs $1599 with a 512GB SSD and just a Core i5 processor, there’s no question that the Huawei MateBook 13 is a better value.

And thanks to its dedicated NVIDIA GeForce MX150 Graphics card, this petite laptop can even handle some light gaming as well. It certainly won’t be sufficient to replace a serious gaming laptop, but it can handle most older gaming titles. Overall, it should offer about 4X performance than an integrated graphics card. The GeForce MX150 graphics card also helps apps like Photoshop run up to 2.5x faster than standard Intel HD Graphics. Our only gripe with the MateBook 13’s performance is that that there is no option for a 16GB RAM configuration.

Fortunately, unlike the MateBook X Pro, there’s no chin cam on the MateBook 13. Instead, Huawei’s has housed the webcam in a most flattering position above the display. The webcam quality offers better contrast and more vivid colors than the MacBook Air, but the MacBook Air’s webcam offers more detail.

Similarly to the MacBook Air, the MateBook 13 offers a fingerprint reader that doubles as a power button. The full-size keyboard is edge-to-edge, backlit, spill proof and it offers 1.2mm of travel. Overall, the keyboard is very nice to use. The trackpad is not enormous but it’s wide and well-sized and it offers good traction. It’s also worth noting that the fingerprint reader is very responsive.

Speakers on lightweight laptops are never something we take too seriously. That said, the audio coming from the MateBook 13 is ok and able to get pretty loud, but we were expecting more oomph since they are Dolby Atmos powered. To that effect, the MacBook Air’s speaker offers superior detail and depth.

When it comes to ports, the MateBook 13 comes with a 3.5MM jack for headphones and two USB-C ports, one for charging. Huawei is throwing in their MateDock 2 for free with purchase. The MateDock is a slim dock that extends its ports, but we didn’t receive it for testing. The dock provides users with an additional USB-C port, a USB Type A port, and HDMI.

We’ve been getting about 7 to 8 hours of use on a charge. That isn’t horrible, but it’s mediocre.

The MateBook 13 is available now for pre-order at Amazon and Newegg.  It will be available to purchase from Microsoft.com soon an in Microsoft stores beginning February 4th.