Today at Mobile World Congress, Huawei just announced their follow up to last year’s superb 13.9-inch MateBook X Pro, a laptop than many reviewers (including myself) described as being the PC user’s answer to the MacBook Pro. The 2019 Huawei MateBook X Pro features a new 3:2 aspect ratio, an upgraded processor, upgraded discrete graphics, and a few new Huawei-exclusive software tricks.

The design of the new Huawei MateBook X Pro is not drastically different than its predecessor but it has been refined. You can expect a similar full metallic unibody design with CNC cutting and sandblasting, but this time they’ve made the laptop cover’s aesthetics cleaner by removing the flower from the Huawei Logo.

The display has also been switched to a 3:2 “productivity” aspect ratio, which is the same aspect ratio we recently saw with the MateBook 13. The FullView Display on the MateBook X Pro offers a 91% screen-to-body ratio with a 3,000 x 2,000 resolution at 260 ppi.

Similar to the MateBook 13, the MateBook X pro features a OneTouch 2-in-1 power button that doubles as a fingerprint reader. Like the previous generation MateBook X Pro, there’s a large clickpad and a recessed camera hidden under a keyboard key for extra privacy.

Under the hood, the powerful MateBook X Pro has been upgraded to the latest 8th gen Intel Core i8565U processors, which runs alongside an Nvidia GeForce MX250 discrete graphics card with 2GB of RAM, and the laptop can be configured with up to 16GB of RAM and a 512GB SSD. When it comes to keeping cool, the MateBook X Pro features a smart cooling system that utilizes Huawei’s improved Shark Fin Fan 2.0 system which is supposed to be 20% more efficient than its predecessor.

On the connectivity front, both its Wi-fi and Bluetooth chips have been upgraded. Bluetooth is now 5.0, offering up to 2x the speeds, and Wi-fi now supports up to 1733Mbps down. When it comes to ports, the system is no slouch either, offering two USB-C ports and a single USB-C. Notably, the system has been upgraded with a full speed Thunderbolt 3.0 port that you can use to connect a 4K monitor or external graphics card.

There’s also a quad-mic which is able to detect sound from up to 4 meters away. Battery is said to be 13 hours for video playback, 14 hours for Office apps, and 12 hours for web browsing.

All of the MateBook X Pro’s hardware specs are impressive, but it’s not just upgraded hardware that the new MateBook X Pro offers, but it comes with several new software tricks. These new features are akin to Apple AirPlay, in that they are only useful if you’re using a Huawei mobile device with your Huawei laptop. 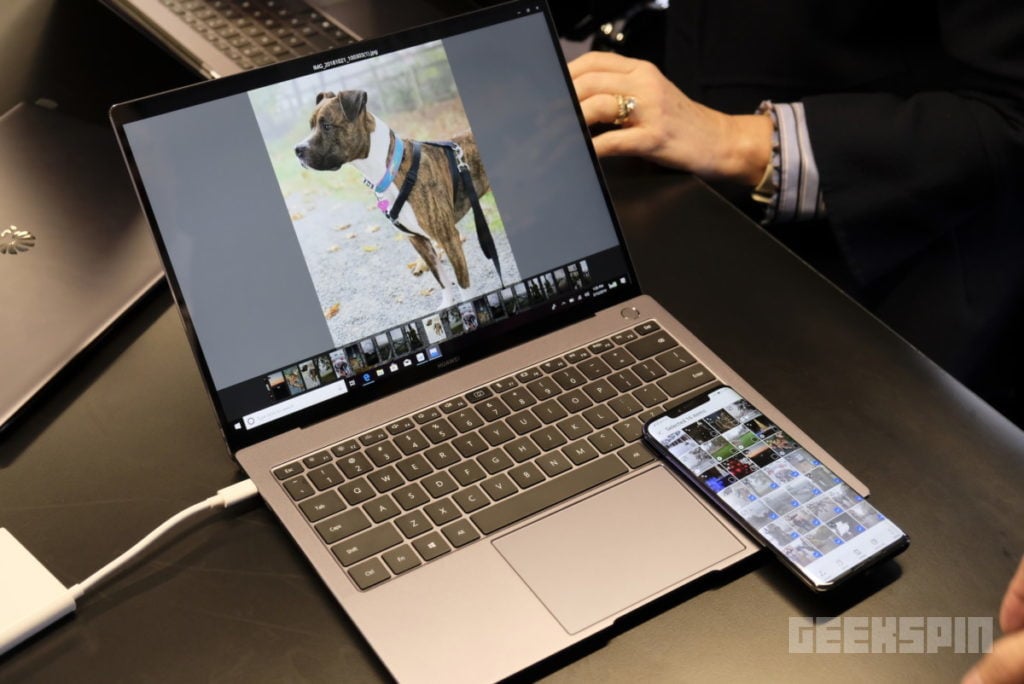 The new OneHop to Transfer feature lets you instantly transfer photos, videos, and documents at a speed of up to 30Mbps.  There’s also the new OneHop to record PC screen – just shake your phone and tap to record what is happening on your laptop screen automatically. The video recording will be saved to your phone for quick sharing. Last, but not least, is a new Clipboard sharing feature which lets you copy the text content on one of your Huawei devices,  and then makes the copied content available to paste on other nearby devices.

The 2019 Huawei MateBook X Pro will be available in a choice of space gray or mystic silver.

In addition to the Huawei MateBook X Pro, Huawei is also announcing their MateBook 14, which is poised to be a more affordable laptop than the MateBook X Pro, but with similar performance offerings and pretty premium specs. To that effect, the MateBook 14 features a metal body design with a ”refined” sandblasted finishing. It too offers a FullView display with a 3:2 aspect ratio, but the display is a 2K display with a 90% screen-to-body ratio with a 2169×1440 resolution at 185 ppi.

When it comes to performance, the MateBook 14 offers strikingly similar specs under the hood to the MateBook X Pro, but its hard drive storage caps out at 512GB. Other similarities with the MateBook X Pro, include a OneTouch 2-in-1 fingerprint and power button, a recessed camera for privacy, and it also supports the same new OneHop and clipboard sharing features.

In addition, the MateBook 14 comes with a multifunction charger which can charge multiple USB-C devices at once. Not only is this multifunctional charger able to quickly charge a phone, but it can also provide the laptop with 3 hours of power from just 15 minutes of charging. Battery life is claimed to be 15 hours for video, 14 hours for office and 10.5 hours for web browsing.

The Huawei MateBook 14 will be available in a choice of space gray, mystic silver or pink gold.