Lenovo has unveiled its newest generation of convertible PCs, in the form of the Yoga C940, C640, S740, and S940, bringing with them a host of new smart-features to the lineup. For example, many of the new models will offer a Smart Home UI interface, which offers users a familiar visual experience to what they are used to seeing when managing connected Amazon devices from within the Alexa app.

At the high-end of the new lineup, is the Yoga C940. The 14-inch C940 includes a Super Resolution feature that allows it to upscale video to FHD on Windows Media Player. Lenovo is also bringing its AI-enhanced Intelligent Cooling Mode technology to the C940. The mode monitors the device’s thermal attributes to better control its fan, which in turn allows for longer battery life by auto-adjusting performance and optimizing battery life based on tasks. The C940 also features a Modern Standby mode, which enables the device to perform a variety of background tasks while in sleep mode – that includes being able to receive emails and being able to instantly wake from sleep mode, just like how a smartphone does.

Last but not least, the Yoga C940 brings with it several new features, with many of these focusing on security. Some of the more notable of these include Windows Hello biometric authentication and a TrueBlock Privacy shutter. There’s also a redesigned rotating soundbar that houses a Dolby Atmos Speaker System. The premium 2-in-1 also houses a garaged pen with silo charging.

The 15-inch version of the Yoga C940 further ups the ante by being configurable with 9th Gen Intel Core processors and a 4K VESA400 HDR display option that sports 500 nits of brightness.

The 15-inch Yoga S740 can be configured with a 9th Gen Intel Core i9 mobile processor and NVIDIA GeForce GTX1650 GPUs. Its 15-inch FHD HDR display with Dolby Vision (500 nits) and a TrueBlock Privacy Shutter both come standard. 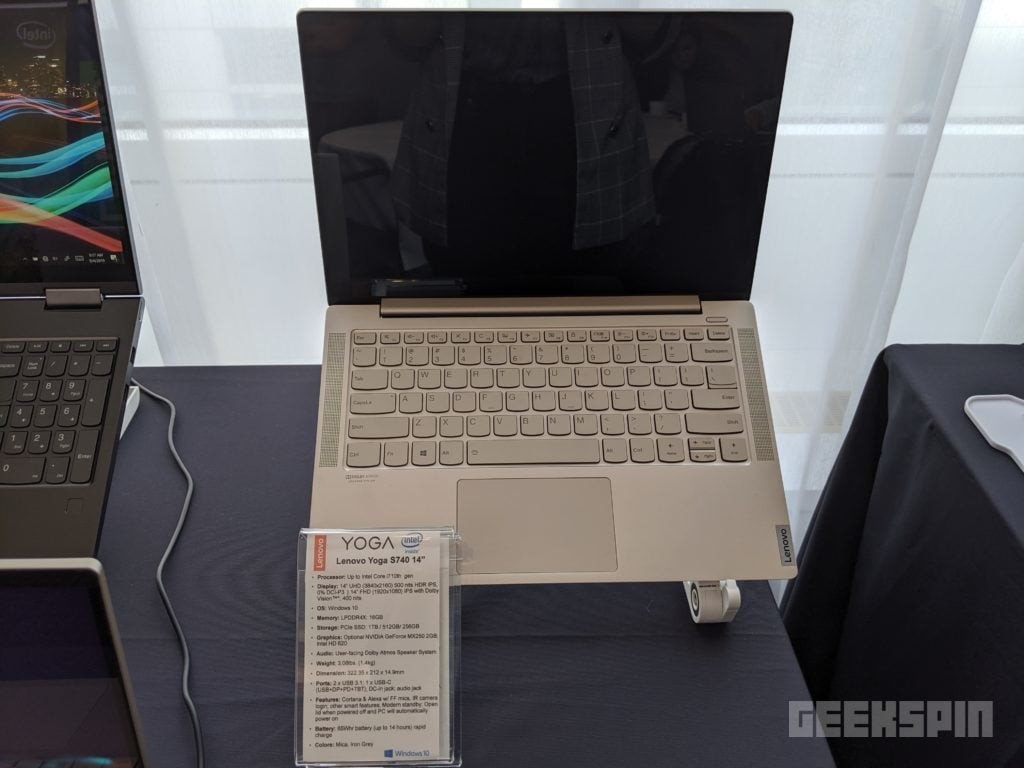 The smallest in the new lineup is the 13-inch C640, which has a variety of features to boast about, including the fact that it can be configured with a 10th gen Intel Core i7 processor and an optional integrated 4G LTE connection. You can also opt for a Lenovo digital pen to use with this model. Battery life is claimed to be up to 20 hours.