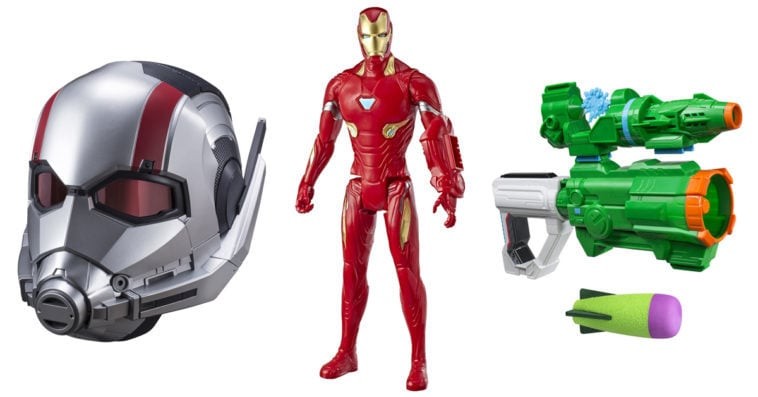 With less than a month to go before the theatrical release of Avengers: Endgame, Hasbro has revealed its collection of toys based on the highly anticipated Marvel movie.

First in the list is the Marvel Legends Series Ant-Man Electronic Helmet, which features 6 red and blue LED light on its antennae and jawline. In addition to its movie-inspired design and detail, this fan helmet also boasts fantasy-inspired interior sculpting and design. This wearable toy is now available for pre-order on Hasbro Pulse for $99.99.

The collection also includes the $14.99 Marvel Avengers: Endgame Iron Man Blast Repulsor Gauntlet, which comes with 2 Nerf darts that serve as Iron Man’s repulsor blast. Also included in the product lineup is the Target-exclusive $24.99 Iron Man Arc FX Armor Set, which is composed of a mask and a battery-operated blast glove that emits lights and sound.

But if you prefer to show your face while in a full Iron Mask suit, then the Marvel Avengers: Endgame Iron Man Flip FX Mask would be perfect for you. This $19.99 high-tech helmet features 2 mask views. Wearers can choose between flipping the mask up to deliver a witty one-liner, or closing it to focus on combat moves. It includes an adjustable strap and a 1.5V AA battery.

All these toys will officially hit the shelves in Spring 2019, except for the Marvel Avengers: Endgame Iron Man Flip FX Mask, which will be available in Fall 2019.