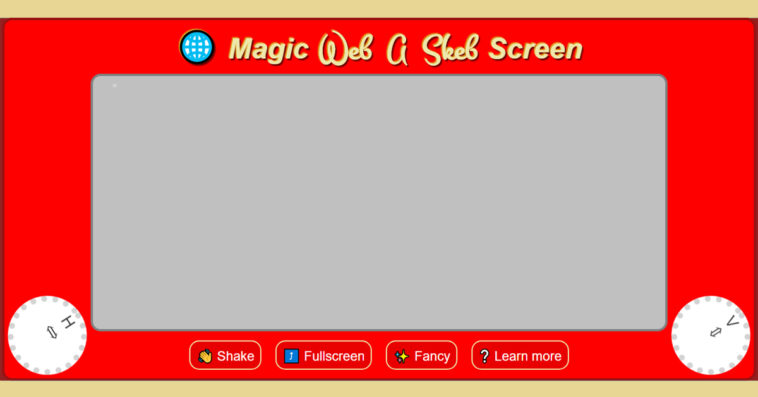 You can now make your own masterpiece on the newly unveiled web version of the classic drawing toy Etch A Sketch.

Finally at a shareable stage, it's my Web A Skeb PWA!
? Twist the knobs to draw
? Shake to erase
? Toggle through 3 effects
Show me what you create at https://t.co/fZNBtD4TZW and feel free to critique my code at https://t.co/VBYHHOMGAs pic.twitter.com/IVLhBz8qur

Though Web A Skeb basically works just like Etch A Sketch, the former does come with a couple of extra features. For instance, users can click or press the “Fancy” button to create lines with shadows and the “Fanciest” button to draw lines with swirling rainbow color. Additional buttons include “Fullscreen” and “Fast,” which allows users to draw at a speedier rate.

While Web A Skeb works best with a touchscreen device, users can also play it using a laptop or a desktop computer. Sadly, the mouse and the trackpad only let users toggle one knob at a time. But based on one of Merewood’s responses on Twitter, it seems like he’s planning to make the virtual toy more accessible and add the ability to draw on it using arrow keys.

Invented by André Cassagnes of France, Etch A Sketch was first released in 1960 and went on to sell 600,000 units that same year. Over the decades, it became a popular toy among kids, partly because of the frustrating yet highly addictive experience it offers. The toy gained a whole new audience when it was featured in the first-ever Toy Story movie.  In fact, just two years after the 1996 release of the animated Disney film, Etch A Sketch was inducted into the National Toy Hall of Fame, and was later added by the Toy Industry Association to its Century of Toys List in 2003.