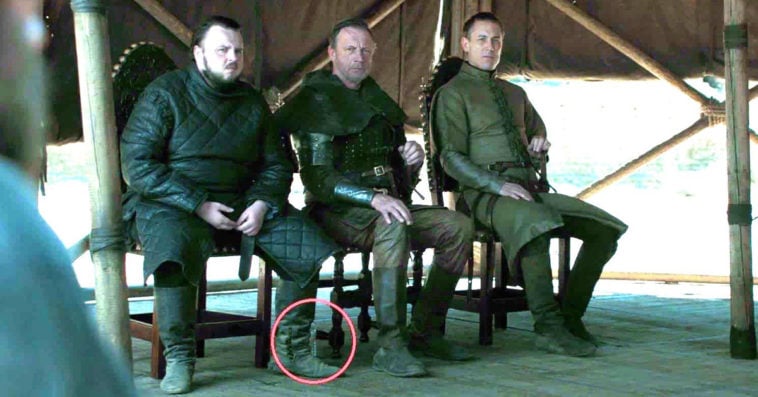 Game of Thrones’ has finally ended its eight-season run last Sunday night. Though the show’s finale featured a number of incredible moments that fans would surely remember forever, it also included two similar production gaffes that are too disappointing to forget.

About halfway through the episode, in a scene where Tyrion (Peter Dinklage) was making a case for the future of Westeros in front of the surviving lords and ladies of the Seven Kingdoms, some sharp-eyed viewers noticed not one but two modern-day plastic water bottles left on the medieval set.

The first bottle was seen behind Sam’s (John Bradley) left leg around the 46-minute mark of the finale, while the second one appeared a few minutes later between Ser Davos (Liam Cunningham) and Gendry’s (Joe Dempsie) feet.

a water bottle in King’s Landing!! #got #gameofthrones pic.twitter.com/mwGQlsLwnh

Unsurprisingly, lots of Game of Thrones fans aren’t happy with the slip-ups, which, according to them, only prove that the quality of the show deteriorated and the final season was rushed and lazily done.

They really stopped caring didn’t they?

They aren’t even trying at this point

Anyone defending this final season can’t deny it’s the laziest and most rushed of them all. In more ways than one. Clearly.

The editor was like, “This season is pretty much garbage, so who cares if there’s plastic bottles and coffee cups littering the set?”

Proof that the quality of this show has gone down. First Starbucks, now a water bottle. Worst ending for the best show. #GoT #DemThrones pic.twitter.com/h64CEP8eER

LMAOOO I CAN’T BREATHE THEY DID IT AGAIN ?? First Starbucks now a water bottle this show is a joke #GameOfThrones #GameOfThronesFinale #TheFinalEpisode pic.twitter.com/9YaFF8Pnm6

But some fans just took the snafus lightly and even shared funny and clever reactions to it.

Water bottle and coffee cups those were the true Easter eggs

They put the plastic water bottle in the episode to get you to talk about that and not the shitty episode pic.twitter.com/AXERf5oWZo

Sam brought a plastic bottle to the council to raise awareness about global warming and recycling #GameOfThrones pic.twitter.com/7tUBXLZfas

As fans know, this isn’t the first time the final season of the hit HBO series has included a production gaffe. On May 5th, the fourth episode of the eighth season had some viewers shocked and confused at the same time when they spotted a modern-day coffee cup during a large banquet scene in the installment.

Shortly after the mix-up went viral, HBO released a statement confirming that the coffee cup was from the show’s craft services. The network also made fun of it, saying: “The latte that appeared in the episode was a mistake. Daenerys (Emilia Clarke) had ordered a herbal tea.”

A day later, HBO edited the coffee cup out of the shot it appears. While HBO would likely do the same with the two plastic water bottles spotted in the series finale, it’s unclear how the network would address this yet another disappointing production gaffe.