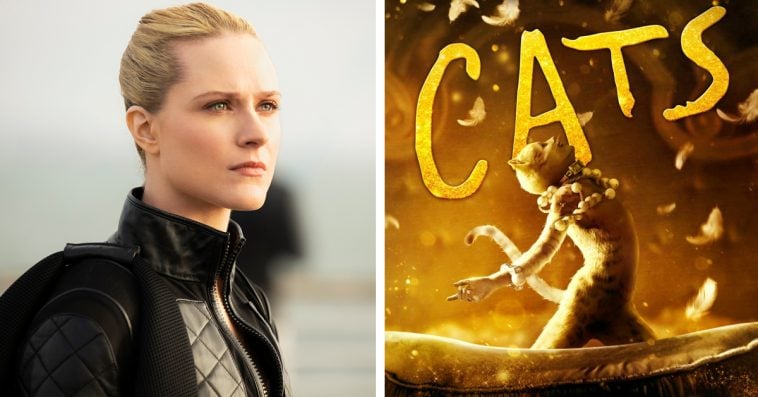 After watching Tom Hooper’s film adaptation of the beloved Andrew Lloyd Webber stage musical, Wood couldn’t help but share her thoughts about the movie on social media. And much to the surprise of many of her followers, her review of the film was brutally honest.

Over on Twitter, in a since-deleted post, the Westworld and Frozen 2 actress wrote: “……..#cats is actually worse than I thought it would be, And I already thought it would be horrible. But….I am actually speechless. Why would you change the choreography? I…am SPEECHLESS. It’s not the cast’s fault. Its… maybe the worst thing I have ever seen. Ever.”

One of the several responses to her tweet was from Fandom managing editor Eric Goldman, who wrote, “I felt like I was on acid watching it. So utterly bizarre.”  Wood agreed with his tweet, replying, “Totally! Like my life is not in danger, but I feel like I’m going to die.”

Wood also retweeted a post by @cyberpunknoire, who said that the film adaptation is “an insult to mainstream audiences and … insult to the OG Cats musical fans.”

And when Twitter user @sewbysea slammed Wood for criticizing the choreography in the movie even though she’s not even a dancer, the actress reiterated that the cast are not at fault for the bad reviews.

“I feel bad for them. It wasn’t their fault,” Wood said of the cast. “They changed all the iconic choreography. Took out 70 percent of the main characters. Changed the plot. I grew up in theatre. I was married to a dancer. I have massive respect for what they do which is why this was such a let down.”

As for why she removed her first tweet about the movie, Wood explained, “I stand by my review, but I deleted it because I don’t want people to think it was aimed at the actors/dancers. They are probably getting enough negative feedback from the film. Which is a shame. They were so innocent.”

Cats stars James Corden, Judi Dench, Jason Derulo, Idris Elba, Jennifer Hudson, Ian McKellen, Taylor Swift, Rebel Wilson, and Francesca Hayward, among many others. But despite its all-star acting ensemble, the movie failed to connect with the audience. Only receiving a C+ CinemaScore from moviegoers, the film has also been lambasted by critics, currently holding at an 18% rating on Rotten Tomatoes.

Apparently, these negative reviews have greatly affected the box office performance of the movie. Against a $95 million budget, Cats has only grossed $11.1 million domestically and $4.1 million overseas.