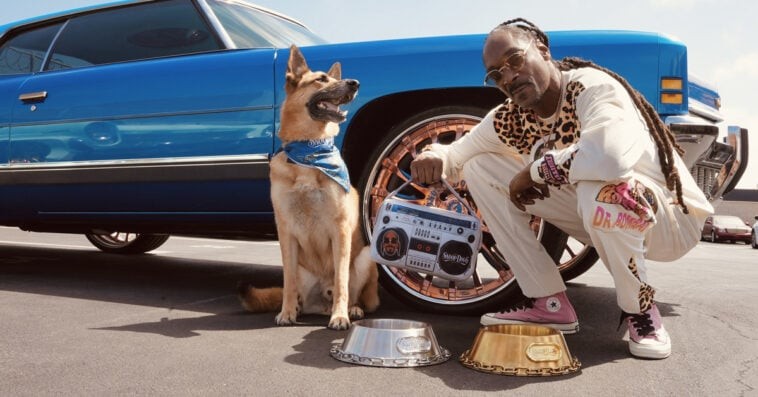 Snoop Dogg has a new business venture and it targets pet owners like him who love to spoil their furbabies like royalty.

“If my dogs ain’t fresh I ain’t fresh,” Snoop said in a press release announcing his new business venture. “These dogs and their apparel are a reflection of Tha Dogg himself, so they gotta look the role of a Top Dog, ya dig?!?!”

What is Snoop Doggie Doggs?

As of its November 15th launch date, Snoop Doggie Doggs currently has six collections. They are called Off the Chain, Boss Lady, Throw a Dogg a Bone, Mic Drop, Halftime, and Classic Snoop.

“Snoop Dogg was, without a question, the most fitting and amazing partner we could think of in the dog and pet space,” said Rob Brandegee, co-founder of Little Earth Productions, Inc. “Snoop’s personality and authenticity are undeniably evident in our creative pet product offerings, and we couldn’t be more thrilled to share the new Snoop Doggie Doggs brand with you ahead of the holidays – it’s the perfect holiday gift for pet owners this season. Talk about a holiday treat.”

“Having worked with Snoop for the better part of two decades, it’s always been about expanding his brand while remaining authentic to his consumers and fans,” said Constance Schwartz-Morini, CEO of SMAC Entertainment, of the rapper’s new business venture. “The launch of Snoop Doggie Doggs is the perfect addition to the Broadus empire.”

With prices ranging from $14.99 to $99.99, the entire Snoop Doggie Doggs line is now available for purchase on SnoopDoggieDoggs.com and on the brand’s official Amazon store. Inspired by Snoop Dogg's most iconic looks, the Snoop Doggie Doggs is a collection of pet apparel, plush toys, bowls, leashes, and more.

“We are excited to share that Snoop Doggie Doggs is now available in Amazon’s store,” said Wendy Franks, Director of Amazon Pets, in a statement. “Pet lovers will enjoy shopping this playful collection ahead of the holidays.”

Does Snoop Dogg have any pets?

As mentioned above, Snoop Dogg is a pet parent. According to Us Weekly, Snoop has 11 dogs and two cats.

What kind of dog does Snoop have?

The exact breeds of Snoop’s dogs are unknown. But earlier this year, it was revealed that the rapper owns a gray French Bulldog named Frank. In an Instagram post in January 2022, Snoop revealed that Frank had gone missing in south Los Angeles. Luckily, just a couple of days after he sent out a social media plea to help him locate Frank, Snoop was reunited with his pooch with the help of his fans.

Does Snoop have cats?

How old is Snoop Doggy Dogg?

Snoop Dogg, who was previously known as Snoop Doggy Dogg and briefly as Snoop Lion, is currently 51 years old. The rapper, whose real name is Calvin Cordozar Broadus Jr., was born on October 20th, 1971 in Long Beach, California.

What are Snoop Dogg’s businesses?

In addition to his newly launched line of pet accessories, Snoop has also invested in other business ventures. As pointed out by CNN, Snoop has worked on an animated kid series, released a gluten-free cereal called Snoop Loopz, and launched his own wine label. A vocal advocate for cannabis, Snoop has also created his own line of cannabis products called Leafs by Snoop.