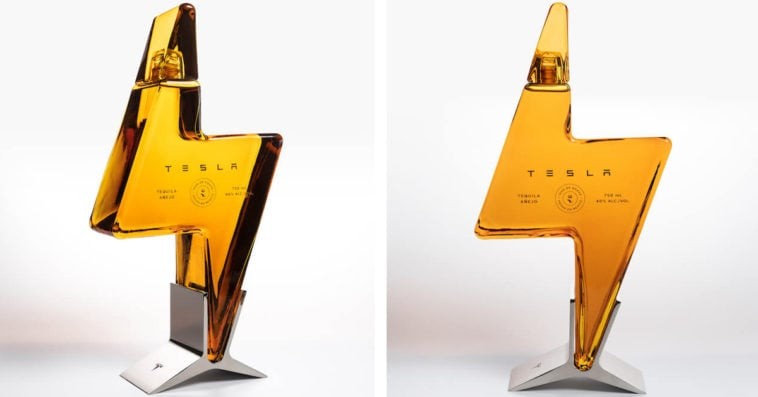 Tesla launched its own brand of tequila last Thursday, and just like some of the electric automaker’s quirky products in the past, the limited-edition beverage quickly sold out within hours of its release, even as orders were limited to two bottles each and only made available to customers in select U.S. states.

Since deliveries of the tequila won’t start until late 2020, there has been no proper review of the product yet. But independent industry consultant Clayton Szczech told Reuters that he doesn’t think Tesla Tequila is significantly different from other tequilas made by Destiladora del Valle de Tequila (Nosotros Tequila’s parent company), as celebrity drinks, in general, are not aimed at tequila aficionados.

The idea for Tesla Tequila started as part of a series of April Fool’s pranks by Tesla CEO Elon Musk back in 2018. In a series of tweets, Musk joked that he had been “found passed out against a Tesla Model 3, surrounded by ‘Teslaquilla’ bottles.” The social media posts came with a picture of himself holding a “bankwupt!” sign.

Elon was found passed out against a Tesla Model 3, surrounded by "Teslaquilla" bottles, the tracks of dried tears still visible on his cheeks.

This is not a forward-looking statement, because, obviously, what's the point?

In October of that year, Tesla filed an application with the U.S. Patent and Trademark Office to trademark the brand name “Teslaquila.” At the time, Musk tweeted that the beverage was “coming soon” and even provided a “visual approximation” of the product in the form of a photo of a bottle of tequila featuring a label with Tesla branding.

Tesla’s trademark application for “Teslaquila,” however, was denied after Mexico’s Tequila Regulatory Council argued the “name ‘Teslaquila’ evokes the word Tequila … (and) Tequila is a protected word.” The council had no qualms with the product’s new name.

In July 2020, Musk took to Twitter once again to tease the arrival of the Tesla-branded tequila. “Coming soon, our battle with Big Tequila! It’s real,” he tweeted at that time.

This isn’t the first time Tesla and Musk have had fun with their choice of merchandise items. Just this July, the automaker sold red, satin short shorts on its website as a jab at investors who “shorted” the company or bet that its stock would drop. Musk was also able to sold thousands of flamethrowers and hats through one of his other companies called The Boring Company.