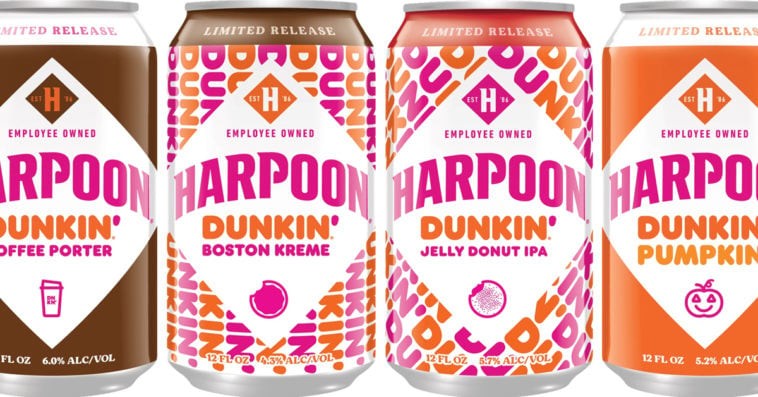 Dunkin’ and Harpoon Brewery are taking their annual seasonal collaboration to the next level with the launch of two new donut-infused beers.

The first of these two alcoholic beverages is the Harpoon Dunkin’ Boston Kreme Stout (ABV: 4.3%), an easy-drinking, creamy dry Irish stout that is brewed with real Dunkin’ donuts and cacao nibs.

The second one, meanwhile, is called the Harpoon Dunkin’ Jelly Donut India Pale Ale (ABV: 5.7%). Made with real Dunkin’ donuts and raspberry purée, this slightly hazy IPA has bright notes of jelly and citrus from the addition of fruit-forward Hüll Melon and Citra hops.

“You get some creative brewers together, maybe over a couple of beers, and sure enough the conversation turns to ‘How could we make some beer with donuts?’” Dan Kenary, Harpoon’s chief executive officer and co-founder, told CNN Business of how the idea for donut-infused beers came about.

Inspired by everyone’s favorite fall pumpkin latte, the Harpoon Dunkin’ Pumpkin (ABV: 5.2%) is a spiced latte ale that is brewed with real pumpkin, pumpkin pie spices, and a splash of coffee. “It tastes like fall, and it gives a little bit of sophistication to the pumpkin with the coffee flavors,” Kenary said of the light-in-color and easy-to-drink beer with a touch of espresso-like roast.

Lastly, the Harpoon Dunkin’ Coffee Porter (ABV: 6.0%), which was launched back in 2018, is a classic American Porter that combines malty notes of chocolate, caramel, and toffee with the comforting and familiar flavor of Dunkin’ Original Blend coffee. The drink is Harpoon Brewery’s first-ever tribute to the Dunkin’ coffee, which has helped keep the beverage company running during its early years.