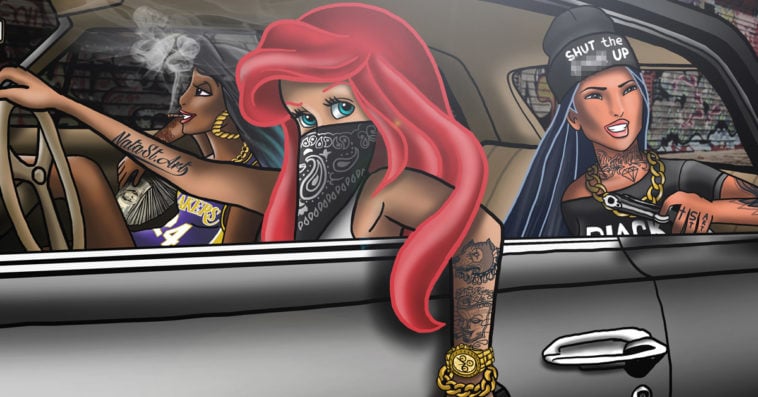 Staying true to Disney’s family-friendly image, Disney Princesses are always portrayed in films, TV, and other forms of media in a wholesome way. Clearly, that golden rule works for Disney, as Disney Princesses has become one of the most successful franchises of the entertainment giant.

But because the Princess Line has been around for several years now, some fans have started to grow tired of the monotonous depiction of the Disney Princesses in official Disney projects. And since there’s no way Disney would abandon its virtuous portrayal of the characters, a number of digital artists have taken the challenge to satisfy their fellow fans’ hunger for an edgier presentation of the Disney Princesses.

One of these talented artists is the Russian illustrator Nata St. art, whose latest collection reimagines the Disney Princesses as tattoo-obsessed, cigarette-loving and gun-toting ladies. Called Swag Princess, Nata St. art’s new art compilation offers a refreshing and fearless take on the Disney Princesses that fans will likely never see in any Disney-commissioned project.

Nata St. art’s Swag Princess is quite similar to the items included in our previous listicles Disney Princesses as Outrageous Punks, Goths and Hipsters and Disney Princesses as Modern Day Millenials. So as a follow-up to these stories, we came up with a brand new list of fan art featuring the Disney Princesses in their most daring and wildest looks ever. In addition to Nata St. art’s works, this list also features creations by Canadian artist Emily Steckly, American artists kharis-art and BadxWolff, and many others.

Pocahontas and Jasmine are spending some girl time together while sharing a hookah in the middle of a lush green field. John Rolfe’s wife has had her first puff while the Princess of Agrabah is patiently waiting for her turn.