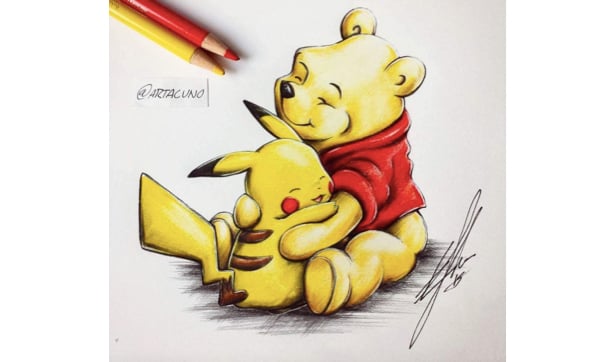 These artists have imagined what it would be like if two of our favorite universes collided – the world of Disney Princesses and the world of Nintendo characters.

Some crossovers are only a matter of time before they happen. For instance, Crisis on Infinite Earths or the Avengers. Other crossovers have pretty much zero possibility of ever gracing our screens, which is why these eccentric mashups of Disney and Nintendo characters should be a treat for you! Artists like Wiberth Gonzales, Hoshi Hana, and Dragon Aurora Light seamlessly combined animated icons, rendering beautiful collisions of two of our favorite franchises.

You’ll find that Peter Pan wandered a bit too far from Neverland and made a new friend in the kingdom of Hyrule. Also, if you’re looking for Alice, she isn’t in Wonderland anymore. Nope. She climbed down a different rabbit hole this time, and ended up in Pallet Town to hang out with her Pokemon squad. Read on for Disney x Nintendo.

Both Winnie the Pooh and Pikachu are known for their sweet demeanor, so it doesn’t come as a surprise that these two would be best friends.