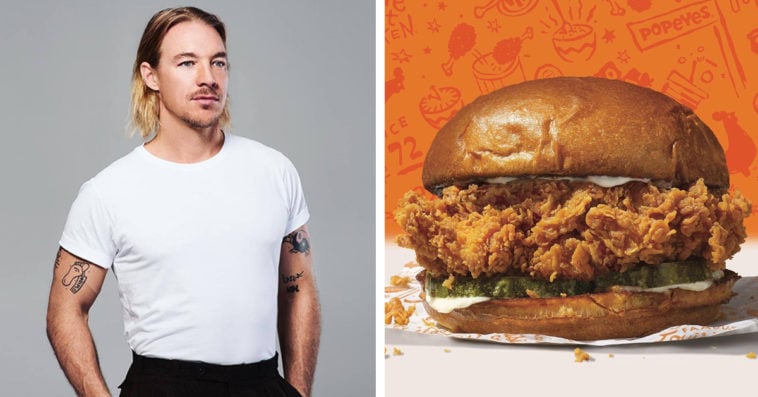 Popeyes sent some of its sold-out chicken sandwiches to Diplo via private jet this weekend.

Diplo took to Instagram on Saturday to share that he received a special delivery of chicken sandwiches from the Miami-based fast food chain. The DJ-songwriter posted a photo of himself standing on the stairs of a Popeyes-owned private jet holding two large bags full of chicken sandwiches.

“Popeye’s heard I wanted to try their sandwich, so they sent me some in a jet…. Wendy’s your move,” Diplo captioned the picture.

Popeye’s heard I wanted to try their sandwich so they sent me some in a jet…. Wendy’s your move.

Later that day, Diplo proved to its 5.6 million followers that he really did get the goods by posting a video on his Instagram story featuring the actual sandwich with someone saying “We got ‘em man” in the background.

Diplo got his delivery of Popeyes’ chicken sandwiches two days after the chain announced that they’re sold out of the item. Officially released on August 12th, the sandwich became hot-selling after chicken sandwich connoisseurs declared on social media that it was better than Chick-Fil-A’s.

Y’all. We love that you love The Sandwich. Unfortunately we’re sold out (for now).⠀ ⠀ Want to be first to know when it’s back? Download the Popeyes app and turn on push notifications. Link in bio.

A post shared by Popeyes Louisiana Kitchen (@popeyeslouisianakitchen) on Aug 27, 2019 at 1:27pm PDT

A rep for Popeyes told ComicBook.com that they’ve been humbled by the public’s response and assured them that they’re already hard at work trying to bring back their chicken sandwich to their menu permanently.

“It has been amazing to see our guests share their love for our brand and for the new Chicken Sandwich on social media and beyond, and we are truly humbled and grateful for their support,” said the spokesperson. “The demand for the new chicken sandwich in the first few weeks following launch far exceeded our very optimistic expectations. In fact, Popeyes aggressively forecasted demand through the end of September and has already sold through that inventory. … We, along with our suppliers, are working tirelessly to bring the new sandwich back to guests as soon as possible.”

While Popeyes has yet to set an official return date for the chicken sandwich, some people are trying to cash in on the popularity of the item by selling them for insane prices on eBay.