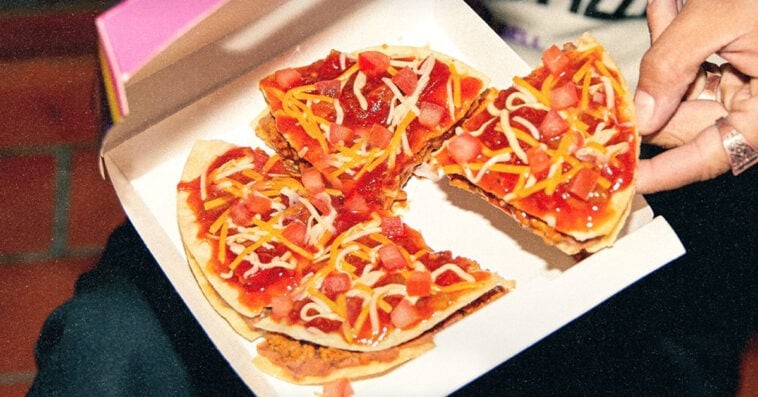 Taco Bell’s Mexican Pizza has finally returned to the fast-food chain’s menu after a two-year hiatus.

How to order a Taco Bell Mexican Pizza

Starting today, May 17th, members of the Taco Bell Rewards program can now purchase the dearly missed menu item through the Taco Bell app for in-store and drive-thru orders. If you’re not a member of the rewards program yet, you can still sign up for it today and immediately order yourself a Mexican Pizza.

For those who have no interest in joining the rewards program, the Mexican Pizza will be available for purchase for members of the general public beginning this Thursday, May 19th.

And for customers who wish to order a Mexican Pizza without leaving their homes, they can enjoy the convenience of delivery exclusively through DoorDash from May 19th to May 26th. The dish will then roll out to other delivery platforms beginning May 27th. In celebration of the return of the beloved treat, DashPass members can exclusively enjoy $2 off one Mexican Pizza with a minimum subtotal of $12 using the promo code MEXPIZZA at checkout.

Haven’t had a Taco Bell Mexican Pizza yet? The fan-favorite menu item is made up of two crispy flour shells, layered with beans, pizza sauce, seasoned beef, tomatoes, and a melted three cheese blend, all for $4.49. Fans can make it a combo with a Mexican Pizza, two Crunchy Tacos, and a Large Fountain Drink for $8.99. The Mexican Pizza is also available vegetarian without the seasoned beef.

Why was the Mexican Pizza taken off the menu?

The decision to remove the Mexican Pizza from Taco Bell’s menu was part of the chain’s plan to streamline its offerings in 2020. The goal of that menu streamlining was to make the chain’s kitchens more efficient and to significantly cut down its packaging waste.

A month before the highly anticipated comeback of the Mexican Pizza, Taco Bell said in a press release that the masterminds in the chain’s test kitchen had worked on the returning menu item “to streamline operations and ingredient sourcing, and leave a lighter footprint at the same time.”

Who brought the Mexican Pizza back?