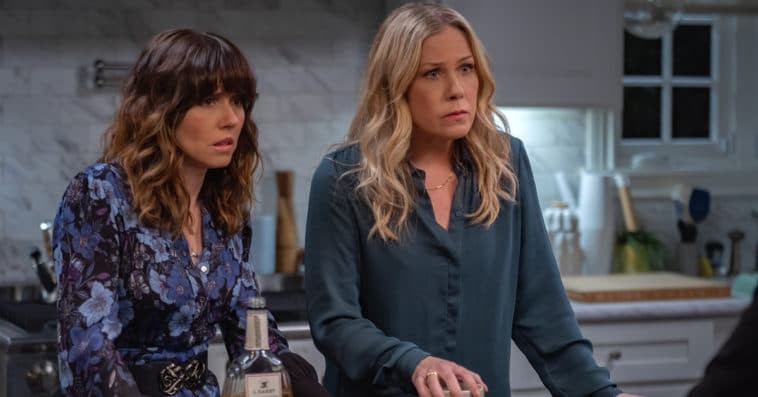 Dead to Me is returning to Netflix for one last season.

The streaming service has renewed the dark comedy series for a third season, which will also serve as the show’s final run. The streamer made the announcement on Twitter on Monday ― two months after Dead to Me’s second season premiere.

The brilliant Dead To Me has been renewed for a third (and final) season! pic.twitter.com/G526LJAWO0

Season 3’s episode count is unclear at this time, but since season 1 and season 2 are comprised of 10 half-hour episodes each, it’s likely that Dead to Me’s concluding chapter will also have the same length.

Created by Liz Feldman, Dead to Me tells the story of the unlikely friendship that blossoms between Jen Harding (Christina Applegate) and Judy Hale (Linda Cardellini) after meeting each other in a therapy group for bereft spouses. Jen mourns the death of her husband, who was killed in a hit-and-run crash, while Judy claims she’s grieving for her fiancé who died of a heart attack. In reality, however, Judy is the hit-and-run driver that killed Jen’s husband, and the incident caused her fiancé to break up with her. As the two with cope with their own losses, Jen becomes more unhinged and slowly unravels the mystery of her husband’s death and its connection to Judy.

“From start to finish, Dead to Me is exactly the show I wanted to make. And it’s been an incredible gift,” Feldman said in a statement. “Telling a story sprung from grief and loss has stretched me as an artist and healed me as a human. I’ll be forever indebted to my partners in crime, my friends for life, Christina and Linda, and our brilliantly talented writers, cast and crew. I am beyond grateful to Netflix for supporting Dead to Me from day one.”

While Netflix and Feldman didn’t offer any explanation about the decision to end the series with season 3, a tweet from Applegate implied that both parties have mutually agreed on it. “I will miss these ladies,” Applegate wrote in a tweet, referring to Feldman and her co-star Cardellini. “But we felt this was the best way to tie up the story of these women.” Production on season 3 has no start date yet, but Applegate wrote in her tweet they will be “getting back to work when it is safe to do so.”

Cardellini, for her part, took to Twitter to thank everyone who watched the show and congratulate Feldman and the entire Dead to Me cast and crew for securing one final season.

In addition to Applegate and Cardellini, Dead to Me also stars James Marsden, Max Jenkins, Sam McCarthy, and Luke Roessler, among many others.

Though Dead to Me is coming to an end, Feldman will be staying with Netflix, as she has just signed a huge overall deal with the streaming service.