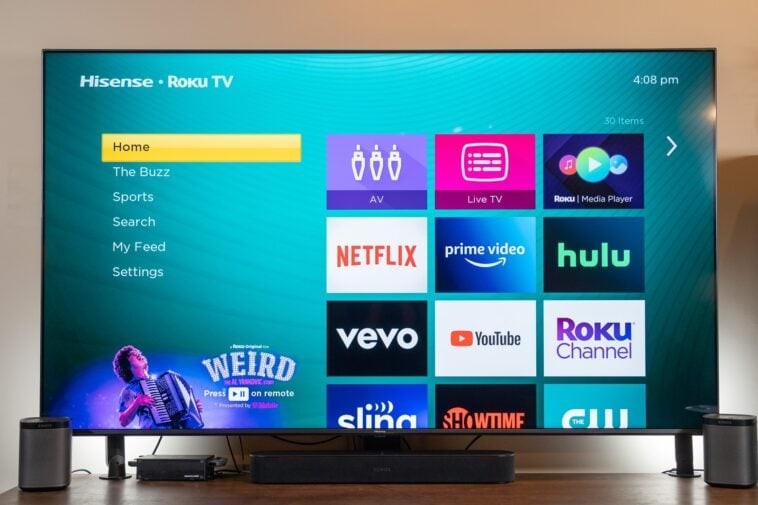 It wasn’t too long ago that purchasing a 75-inch TV would cost you a small fortune. But the Hisense 75″ Roku Smart TV R6 Series 75R6E4 changes all that. Priced just below $600, this 75-inch TV doesn’t slack off on picture quality, and it comes running our favorite streaming OS – the Roku TV OS.

The Hisense R6 Series 75R6E4 TV isn’t quite a head turner but it offers a clean, minimalist design that is simple and attractive. To that effect, its metal-like bezels are super thin – to the point of being nearly invisible. We appreciate that you can barely see the brand name at the bottom of the bezel.

The included V-shaped legs are attractive and minimalist as well. Our only gripe is that the build quality of the TV feels overall a bit plasticky and not very premium.

The Hisense 75R6E4 does not use premium display technologies like OLED or QLED and it does not offer HDR10 or Dolby Vision, instead, it only offers HDR. However, while it lacks many of the premium display technologies that we’ve been seeing become standard these days, we’re still absolutely thrilled with the TV’s color vibrancy, contrast, and brightness – especially for such a low price point.

To that effect, the TV’s standard HDR boosts color and contrast very well. Even a Netflix series like Strange Things which tends to look very dark on many higher-end TVs, comes out bright and clear on the Hisense R6 series 75R6E4 TV. Viewing angles are excellent too – you can watch content from pretty much any vantage point.

In particular, it’s the latter that has really impressed us. Not only is this a TV that offers a huge display for an extremely low price point, but the fact that you can game on it without lag really makes it an exceptional value. To that effect, we’ve been using the TV with a PS5 and we’ve yet to notice any significant lag while gaming.

We generally don’t expect much in terms of a TV’s built-in speaker system, and we always recommend hooking up a soundbar – even if it’s a small one like the affordable Roku Streambar or the pricier Sonos Beam.

In any case, the Hisense 75R6E4 packs in DTS Studio Sound, and despite the speaker being being located on its backside, we are pleasantly surprised by how good the TV’s sound is. Ultimately, you’ll get by just fine without a soundbar or a more robust sound system – for as long as the TV is placed in a quiet and not too-large room.

The Hisense Hisense 75R6E4 comes running the Roku TV OS. We’re huge fans of the Roku TV OS because it’s super easy to use, and it offers a huge catalog of apps and streaming services.

The Roku TV OS is also regularly updated with new and useful features. For instance, its recent Roku TV OS 11.5 update brought enhanced content discovery features to the platform and additional useful new features like the Continue Watching feature that simplifies the process of resuming TV shows or films from wherever you left off.

Absolutely. While, Hisense may not have the same premium brand reputation in the U.S. that the likes of Sony, Samsung, and LG have, Hisense has been making capable TVs since 1978. The Hisense R6 Series 75R6E4 TV in particular offers a heck of a lot of value for a low price. That includes everything from a motion rate that’s good enough for gaming to excellent picture quality, and it comes running the awesome user-friendly Roku TV OS.

Is Hisense as good as TCL?

Arguably, yes. We’ve tested TCL TVs in the past and found that this Hisense model is on par with TCL’s own Roku TVs.

Is the Hisense R6 Series A good TV?

No – it’s actually a great TV. The Hisense 75R6E4 might not offer all the premium display technologies of more expensive TVs – it lacks the likes of Dolby Vision, HDR10 and QLED, but when watching content on it, we don’t feel like we are missing anything. Ultimately, the Hisense 75R6E4 offers everything most people require from a 75-inch TV – including excellent visuals.

Nearly invisible bezels, gorgeous clear and bright colors, lag-free gaming, the awesome Roku TV OS, and a very low price point, all contribute to making the Hisense 75″ Roku Smart TV R6 Series 75R6E4 an incredible value. So much so, that TCL should be worried.

The Hisense 75R6E4 is available at Walmart for just under $600. However, it regularly goes in and out of stock.