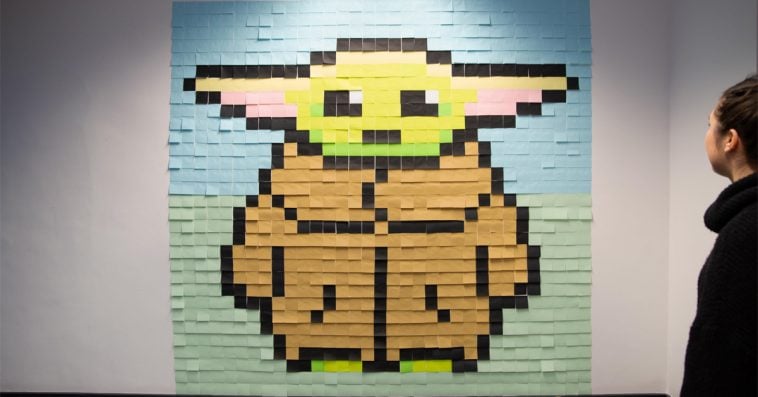 In anticipation of the March U.K. release of the Disney+ series The Mandalorian, a group of employees at office supplies provider Viking has built an incredible Baby Yoda mural made up entirely of Post-It notes to pay tribute to the breakout character of the latest Star Wars spinoff.

A survey previously conducted by Viking found that 53% of workers think that having art displayed in the office makes them feel happier at work, so the company allowed the said employees to use a spare wall at the office for their masterpiece. Planned, designed, and built by 12 of the most dedicated Star Wars fans in the company, the 99×93 artwork features an adorable pixel version of Baby Yoda, aka The Child.

The initial design was built using 1,023 Post-It notes. But to make the project more interesting, the team decided to create an animated GIF of Baby Yoda by making movements and slight changes to the design. With all these movements and changes taken into account, a total of 1,317 Post-it notes were used to bring Baby Yoda to life.

The initial build took the team 4.5 hours to create, with the subsequent movements and changes to the design taking additional 3 hours.

“Our office is full of Star Wars fans, so what better way for us to pay tribute to the saga than with office supplies?” Bob Huibers, marketing executive at Viking, said of the completed mural in a statement.   “We encourage creativity within all our teams and, with Post-it notes and wall space in abundance in our office, we thought the Baby Yoda mural was a great way to bring the whole office together and motivate staff. It was fantastic to see so many people from different departments getting involved in the build, and the finished mural definitely brightened up everyone’s working day.”

This isn’t the first time Viking employees have made Star Wars-themed murals using Post-It notes. Back in 2015, the company also let some of its workers to build murals of Darth Vader, R2-D2, Yoda, and stormtrooper to celebrate the then-upcoming release of Star Wars: The Force Awakens.

Season 2 of The Mandalorian premieres on Disney+ in the fall of 2020.