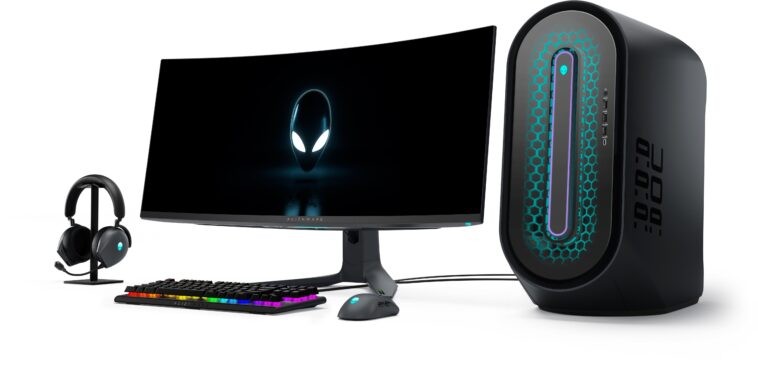 Alienware has unveiled a new set of products for the gaming community, including a revamped Aurora R15 desktop PC, a tenkeyless gaming keyboard, and a lower-cost QD-OLED gaming monitor.

Combined, Alienware claims the new improvements increase airflow by 19%, reduce noise by 66% for CPU intensive tasks and 9% for GPU intensive tasks, and allow the Aurora 15 to deliver 58% more power to the processor, resulting in “double-digit performance improvements.”

Alienware also increased the power supply to the Aurora 15 to support increased power demands from next-gen GeForce RTX 40 series graphics cards and the new feature upgrades. According to the Aurora 15’s spec sheet, we can expect it to include up to 1350W power supply, which is a significant bump from 1000W in the previous generation.

The new Tenkeyless Mechanical Gaming Keyboard is designed to be portable without sacrificing the power of its full-size counterparts. The keyboard was restructured to fit all the necessary keys in a smaller footprint to give users more space for a minimal desk setup or mouse movements during intensive gaming sessions.

The keyboard also comes with a cable routing layout to simplify cable management, a detachable cable that makes it easier to store or travel with the keyboard, and Cherry MX switches that support a host of features for improved gaming and keyboard maintenance.

The final device in the lineup is the 34-inch Curved QD-OLED gaming monitor, which is Alienware’s second-ever QD-OLED monitor offering, but it comes at a much lower price than its counterparts – $1,099.99.

Pricing and Availability of Alienware’s Devices

The Tenkeyless Keyboard starts at $129.99, and the 34 QD-OLED Gaming Monitor starts at $1,099.99. Pricing for the Aurora R15 will be announced soon. The three devices will be available this Fall.