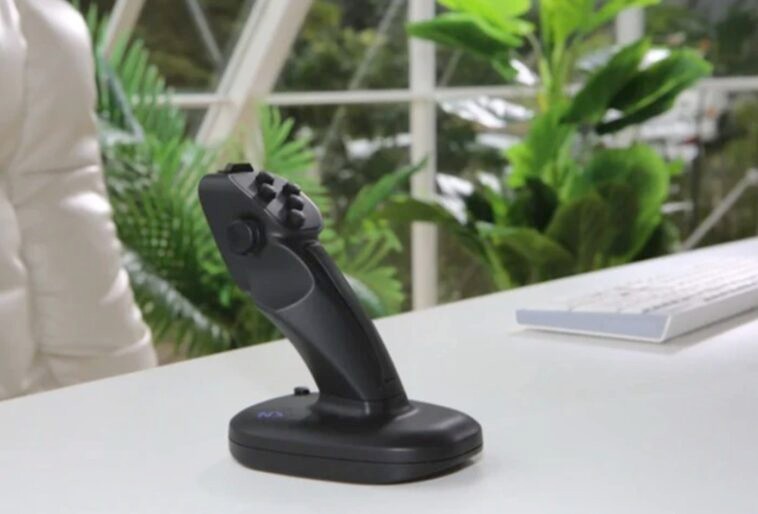 Imagine if a joystick and a computer mouse had a baby. That’s pretty much the concept behind the Nextick 3D controller. This unusual game controller is designed to bring together the best of both peripherals.

The company says that the controller simplifies the gaming experience by eliminating complex mouse movements like having to move the mouse to change direction and click to fire when playing FPS games.

Instead, users of the controller can change direction using the built-in motion sensor, aim with a thumb joystick, and fire using a button that is situated similarly to a gun’s trigger, making for a more natural FPS experience.

The Nextick controller retains the functions of a traditional 2D mouse, like right-click and left-click buttons. It has four shortcut keys that users can map for use while gaming, handling repetitive paperwork, or for convenient login on the web.

But aside from being designed for gaming, Aidus is also positioning the Nextick controller as a better alternative to the traditional mouse for PC games, web surfing, and general multimedia controls.

The controller has a 1,230mAh battery, and users can power it with a USB Type-C or wireless charger. Aidus claims the controller supports 40ms latency gaming and uses a diaphragm and vibration motor.

Currently, the controller currently only supports Microsoft Windows, from Windows 10 and above, and it can only be used when the SDK is applied to the game content. The company says that mac support is on its way.

Aidus is sharing the SDK (for Unreal Engine and Unity Engine) for Nextick for free, and it will release demo PC and VR games that offer full SDK support for the Nextick controller so users can easily experience the controller’s capabilities.

To date, Aidus raised $32,000 in the US on Kickstarter and 720,000 yen in Makuake, Japan, so the first batch of controllers will likely first go to its fans who participated in the crowdfunding. However, Aidus is currently working on establishing partnerships with retailers, so the controller should be available soon.