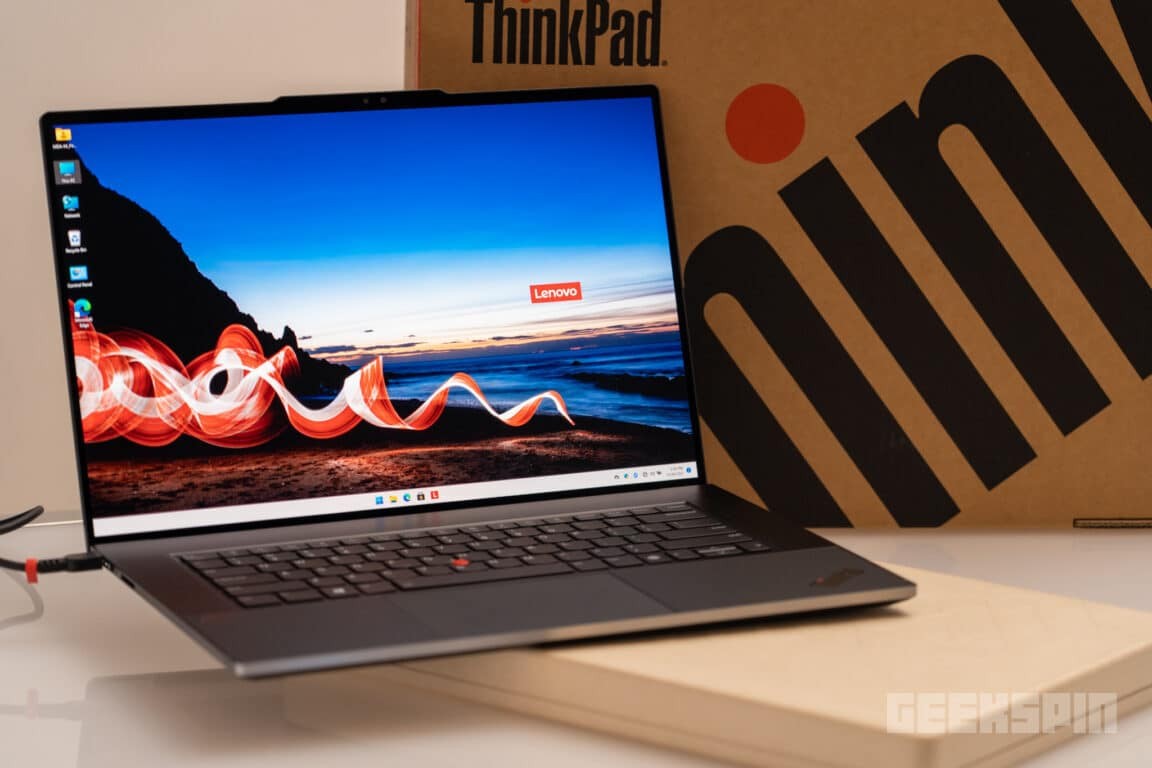 Just when it looked like we’d have a semi-normal CES this year, the Omicron variant stepped in with other plans. While CES 2022 was much diminished, we still got our fill of tech, innovation, and the completely unexpected throughout the week — take a look at the tech we can’t wait to get our hands on this year! 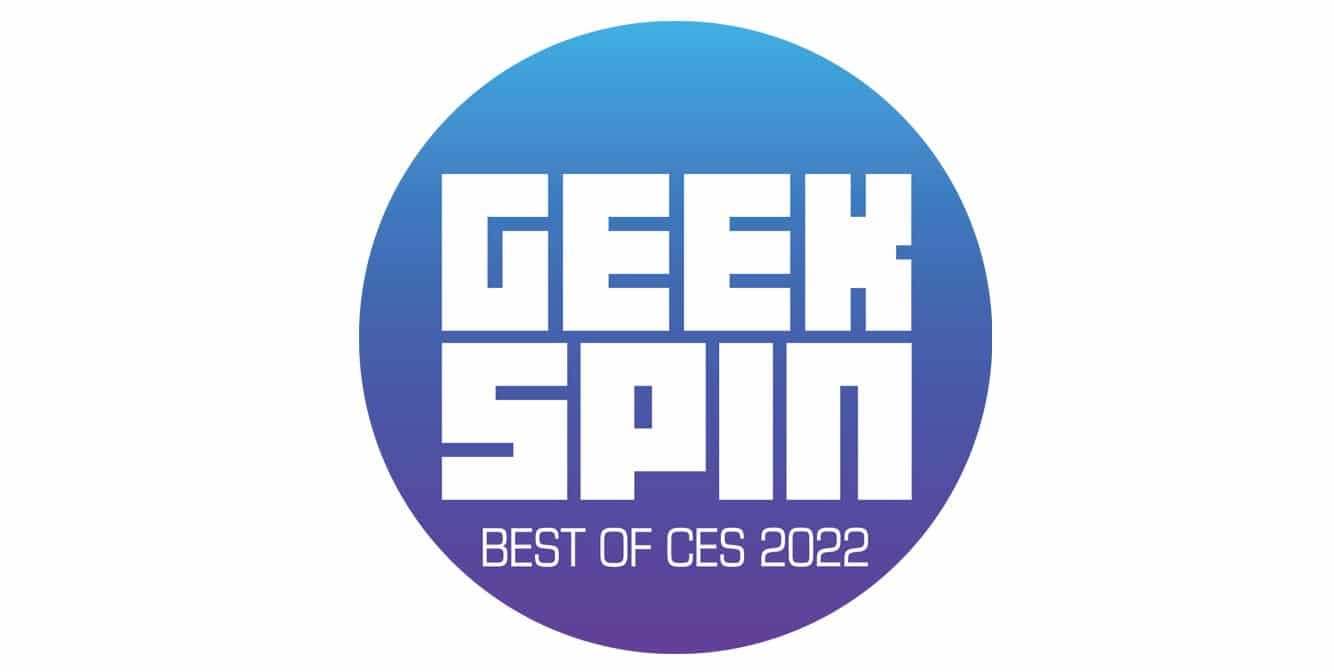 Lenovo celebrated 30 years of the ThinkPad with a brand new insanely stylish line in the Z series, which has a few nods to where Lenovo wants to go with the ThinkPad next. Besides the next-gen AMD Ryzen Pro processors and OLED displays, Lenovo is moving towards a more sustainable future for their laptops, using compostable packaging, using recycled aluminum in the case, and adding a black vegan leather option for the Z13, which makes it our laptop of choice for CES 2022! 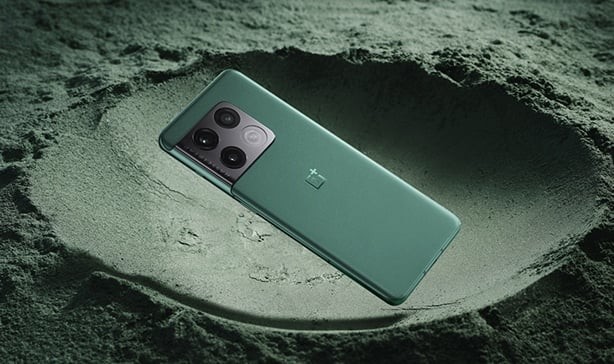 CES is always good for at least a few solid smartphones, and CES 2022 was no exception. We got treated to the OnePlus 10 Pro, the latest model of OnePlus’s flagship line, and the second year in a row they’ve collaborated with Hasselblad on the camera system. With next-gen specs and a huge battery to match, it’s looking like a strong contender in 2022. 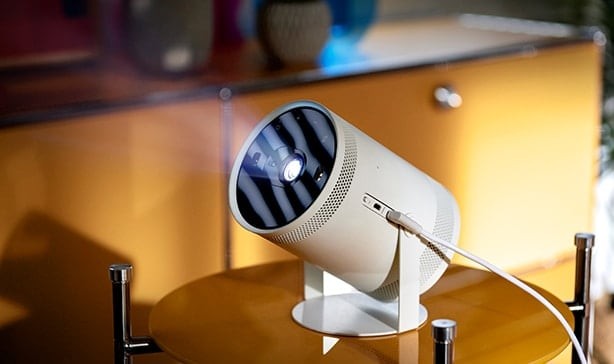 Been a while since we got excited about a projector! The Samsung Freestyle might not have the most geeked-out specs, but it’s super lightweight, works well outside and inside, and can give you up to a 100″ picture. The coolest thing is the versatility, and that’s not just from how small and light it is — it can be screwed into and powered by a light bulb socket, so you can disguise the projector as lighting if you want to! 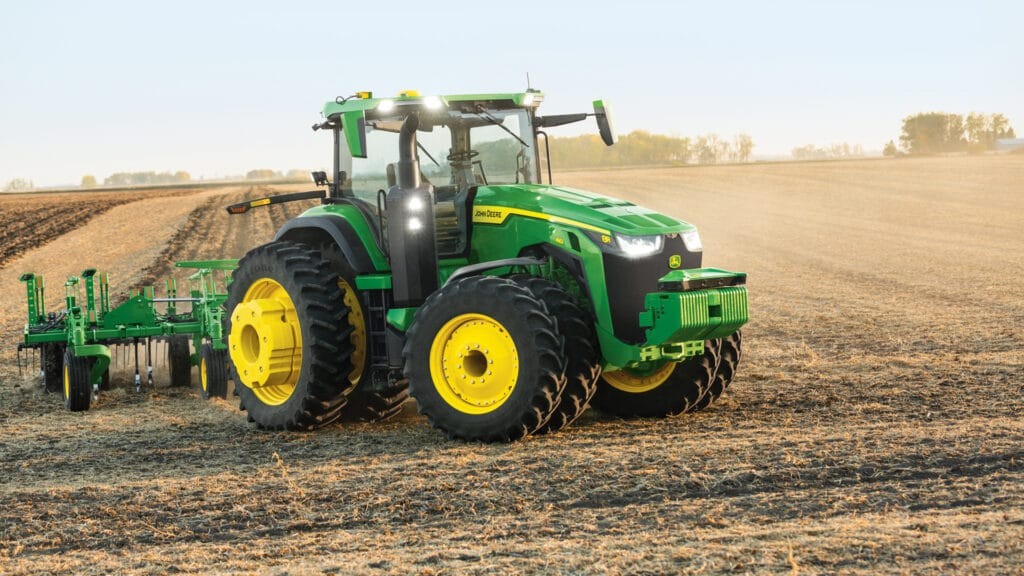 The end of decades of work, John Deere has finally gotten the software and hardware in line to make a fully autonomous tractor possible. No farmer in the tractor needed — after the tractor has been given a programmed route, it can do the work (mostly of tillage at first) by itself, freeing up farmers to go do one of the other many things they have to do. It’s in some ways not as complex as getting fully autonomous cars on the road (although there were unique challenges!), but the effects this could have on agriculture, in general, are big enough to make it worth mentioning! 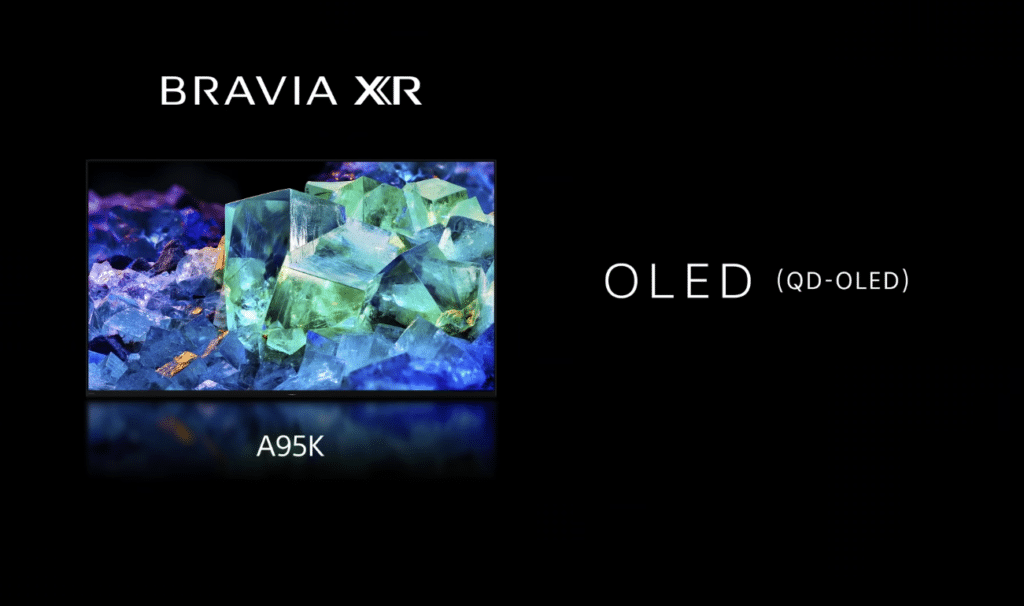 The best wasn’t the biggest for us. There were lots of good TVs at CES as usual, but we’re really excited about the emergence of QD-OLED in Sony’s lineup. The A95K, which will come in 55″ and 65″ models, addresses the one problem with OLED displays — brightness. Getting a little more shine out of that OLED display really brings home how much OLED makes a difference in contrast, and Sony’s Bravia image processing completes the package. 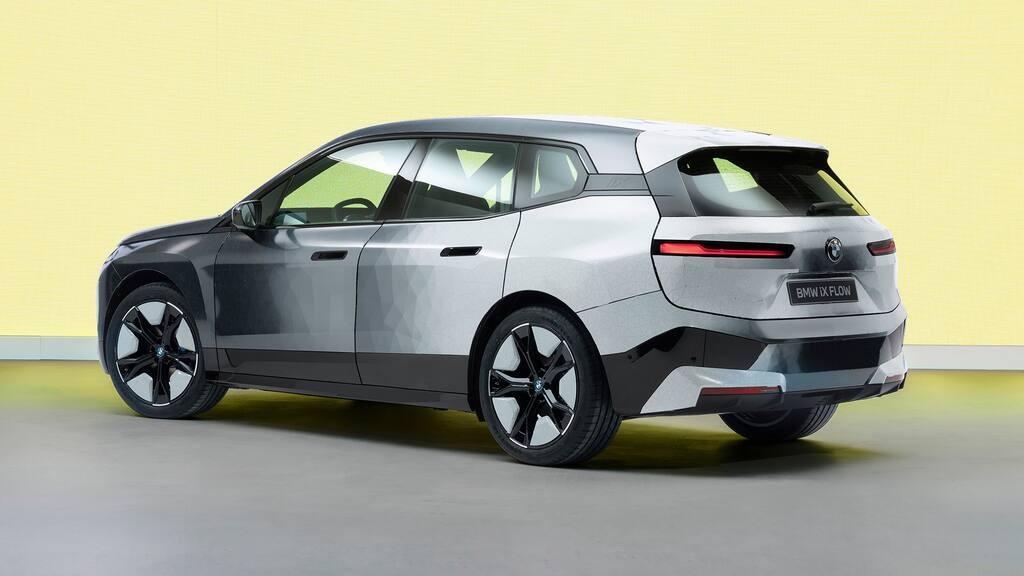 It’s CES — we’re always going to be suckers for something new. And I’m not sure about anyone else, but I’ve never seen a car change colors before! The BMW iX Flow concept at CES uses e-ink (the stuff you usually find in e-readers) on the exterior, allowing it to change color from black to white to grey. It’s just a proof of concept — we probably won’t see it on the road anytime soon, partly because it’d have to hold up to dings and scratches, and partly because if Grand Theft Auto has taught me anything, it’s that the police probably aren’t going to be huge fans of color-changing cars. 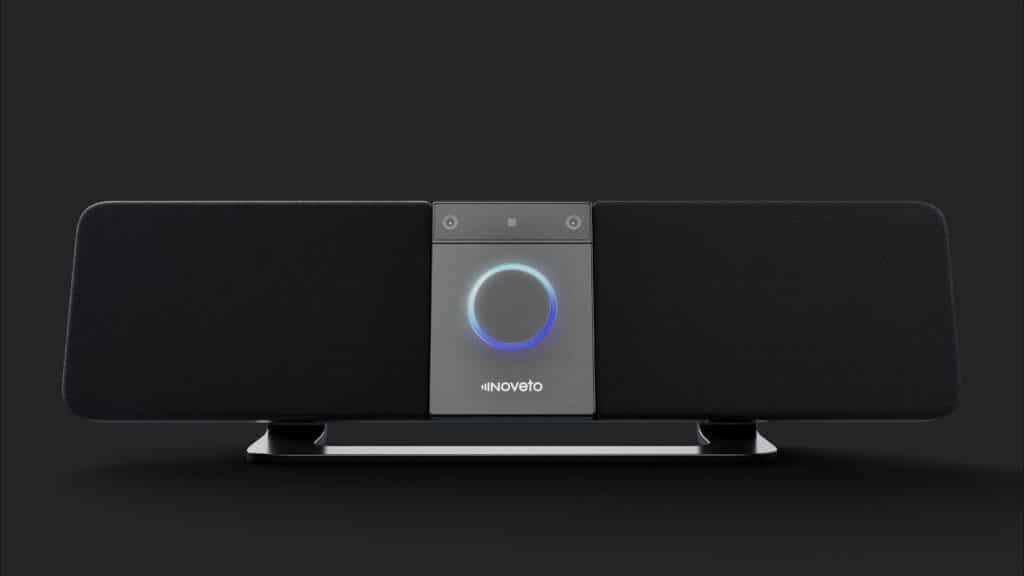 Invisible headphones experience? We weren’t sure what to make of that when we first heard about the Noveto N1, but the concept is pretty cool — using beamforming tech in a hyperfocused way, this desk speaker uses head tracking to continuously beam audio straight to your dome — you can crank the volume, and while you’ll hear it loud and clear, folks in the same room will hear a much quieter version. 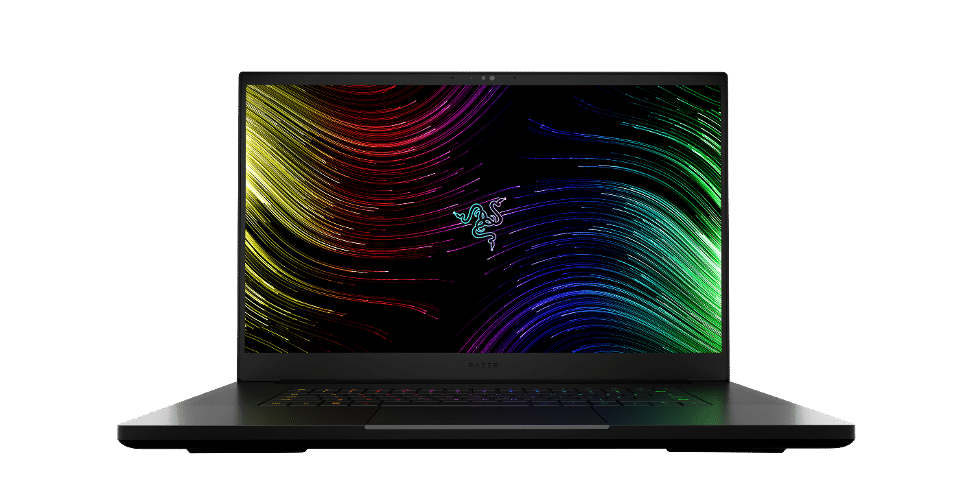 Razer always brings the heat to CES 2022 — and the cooling systems to manage it. This year’s Razer Blade lineup is everything we’d expect from the gaming pros — 12th gen Intel H-series Core processors up to i9, up to an Nvidia RTX 3080 Ti laptop GPU (with RTX acceleration through Nvidia’s software possible), and lots else — including eight (yes, eight) speakers. Truly an all-in-one portable gaming machine. 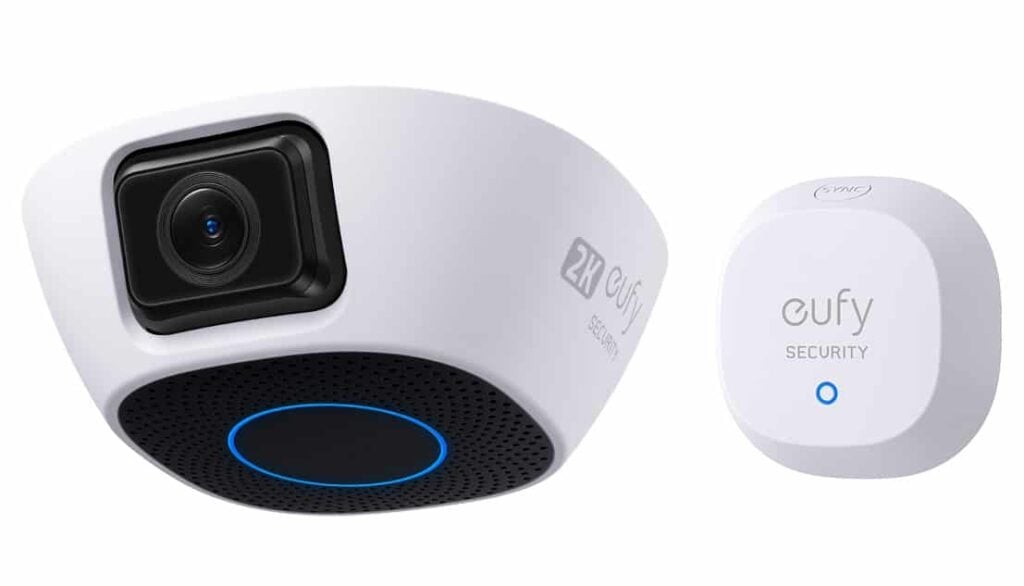 Cameras are hard to improve on these days, so we went in another direction and went with a camera that gets put to work right out of the box. Depending on where you live, reports of garage doors getting broken though during burglaries have become more of a problem — the eufy Security Garage-Control Cam smart home device controls your garage door while giving you a video feed, with geofencing, motion recognition, and smart alerts all included with no subscription. Most importantly, you’ll finally have something to reliably let you know when you left your garage door open on the way out.

Razer makes it again thanks to their partnership with Fossil on Fossil’s latest round of smartwatches. At this point, style has become a pretty big differentiator when it comes to smartwatches, and Fossil has had some great partnerships to help their smartwatch line. This time, it’s gaming pros Razer, giving the watch face their distinctive Chroma design, among other options. Only 1,337 units will be available, because this is Razer we’re talking about. 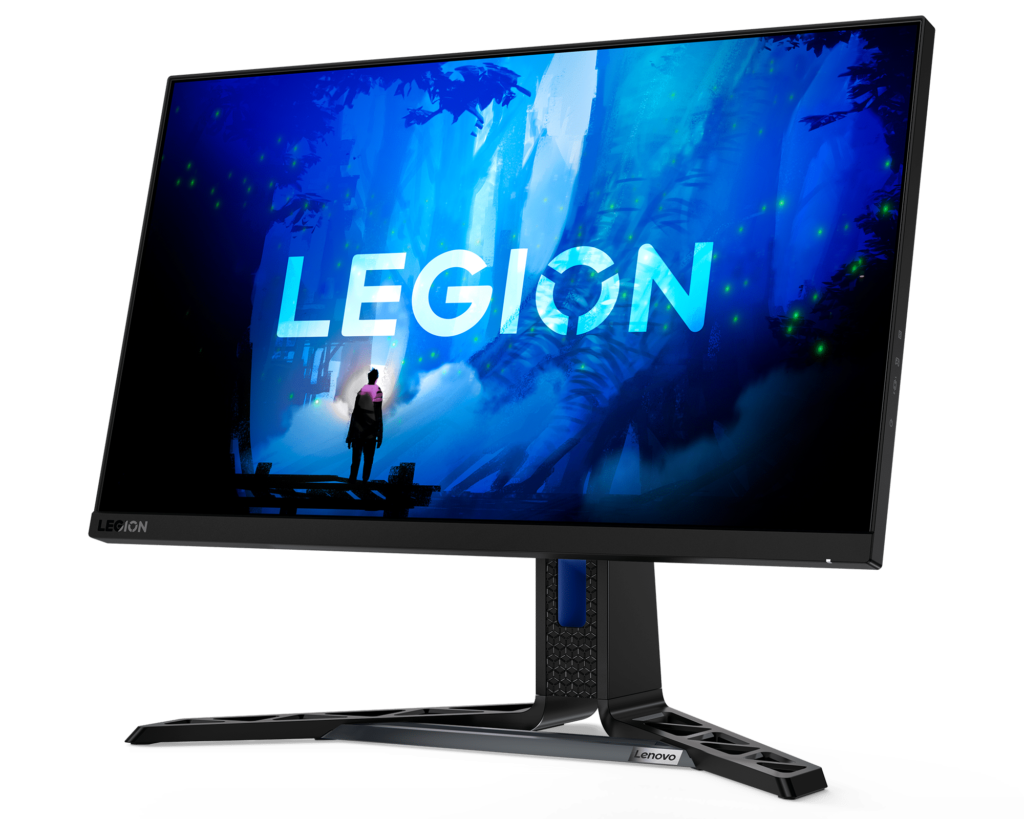 While there were some pretty cool-looking concepts at CES 2022, we’ve been to enough of these to know that the high-concept monitors have the tendency to disappear pretty fast. So, we went with a sure thing — the Lenovo Legion Y25-30 gaming monitor has a 240 Hz refresh rate with the AMD FreeSync tech to match, ensuring that the GPU (best used with an AMD Radeon GPU, likely) and screen work in lockstep to prevent tearing. Top it off with a 24.5″ Full HD IPS display, and you know you’ve got something you can rely on to hang with the most graphics-intensive games. 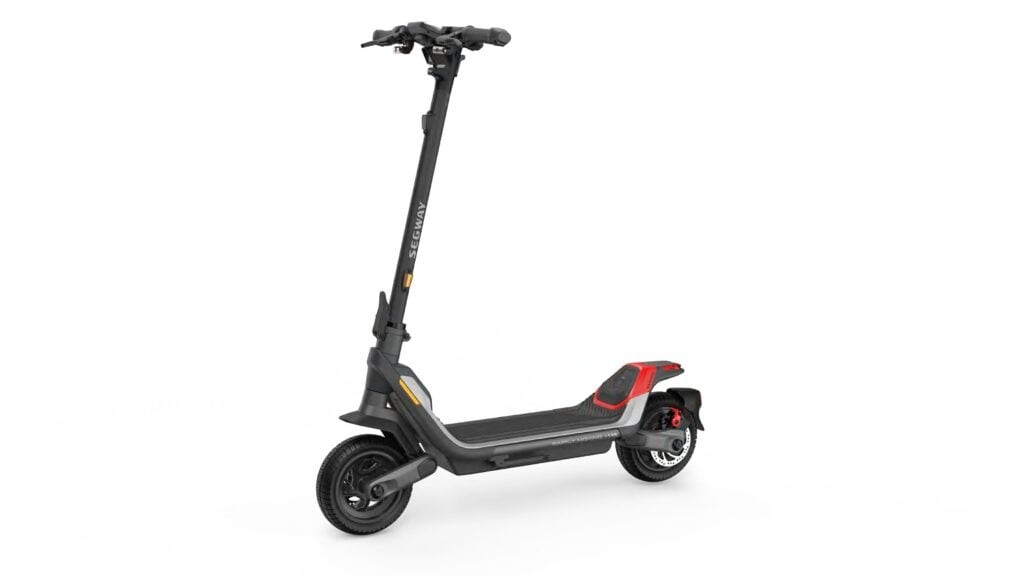 When you see the phrase “Segway Takes Vegas,” you give a knowing nod, secure in the feeling things are as they should be. But, this isn’t the Segway you’re used to seeing! Segway has naturally rolled into other forms of transportation, including the humble motorized scooter. Their P series, including the P100S here, have nice wide footboards, automotive-grade tires, and spring suspensions that make for nice cruising. 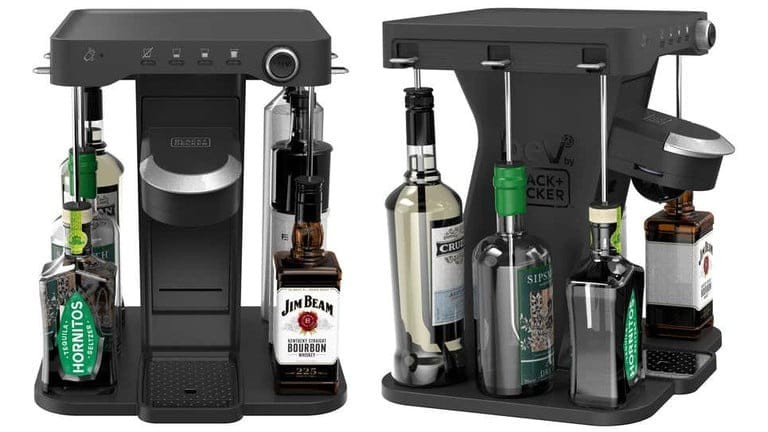 Good on Black & Decker for making sure everyone who made it to CES 2022 was properly liquored up for the experience. The Bev is, indeed, a pod system for cocktails — you supply the bottles of booze, they’ll be providing pods for purchase with all the mixers, which will eventually include all kinds of juice and bitters. It is also, just visually, the most fascinating thing on this list. 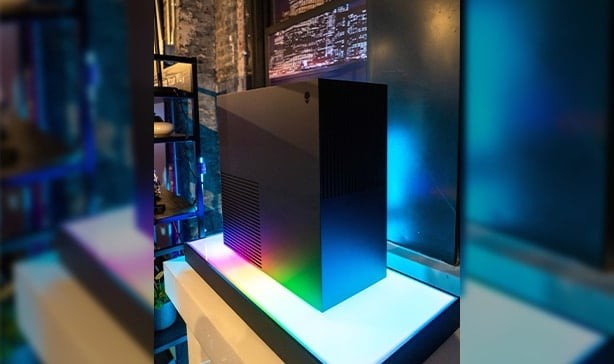 Sometimes things go in a circle. The Dell Alienware Nyx is a true machine of the future — one that realizes some of the things we used to do actually worked better! In this case, we’re talking about cloud gaming — latency is a persistent issue, so instead, just put the Nyx in your room. It’s an edge server that can store games that you have access to, then stream them to multiple devices in the home at once. It solves a couple of problems — lag from cloud gaming and slow internet speeds from too many people in the house trying to game at once. 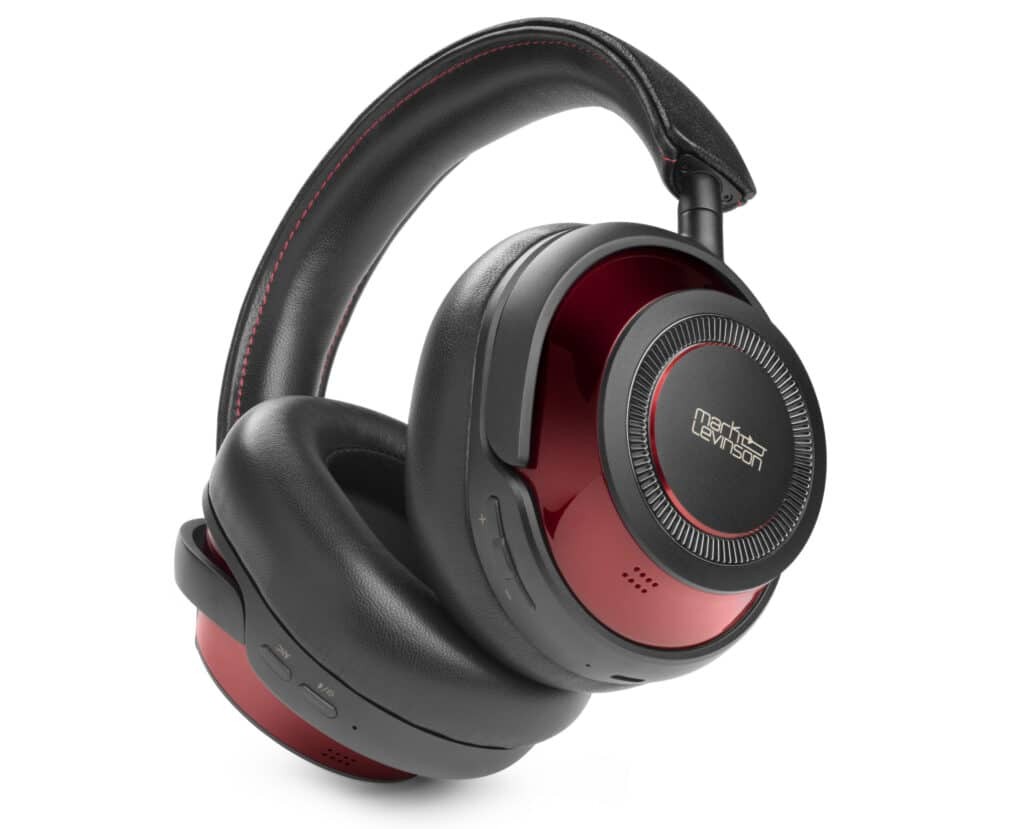 Mark Levinson is Harman/Kardon’s premium, luxury audio brand. How premium, and how luxury? They haven’t even released a pair of headphones under the name until now. The Mark Levinson No 5909 shows why they waited so long — in addition to high-end 40 mm drivers tuned to meet Hi-Res audio standards using Harman’s processing, the headphones feature wireless Adaptive Active Noise Cancellation. They can even last up to 30 hours on one charge with that feature turned on. They’ll set you back a grand, but if you want only the best when you travel (or whenever you finally get back to traveling), they could be worth it! 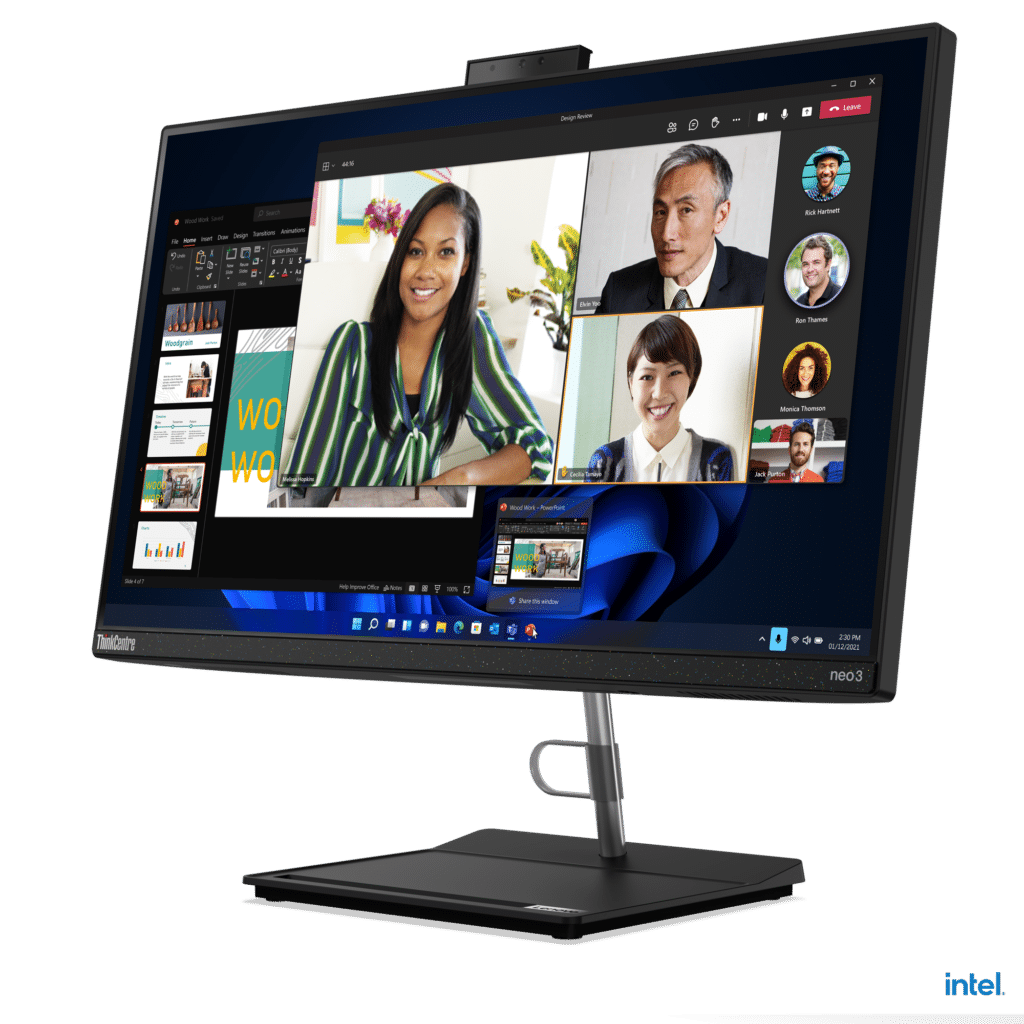 It is what it is — for a lot of us, Zoom meetings, and lots of them, are a new fact of life. So, we give a nod to Lenovo for making a work all-in-one built for that purpose. The ThinkCentre Neo 30a 24 has a 23.8″ FHD display, audio by Harman, and a retractable webcam. But, the big feature is the AI Meeting Manager, which provides you with real-time translation, voice to text, subtitling, a meeting noise editor, and Amazon Alexa Voice Interaction, making international meetings a lot easier, especially if you have to run one. 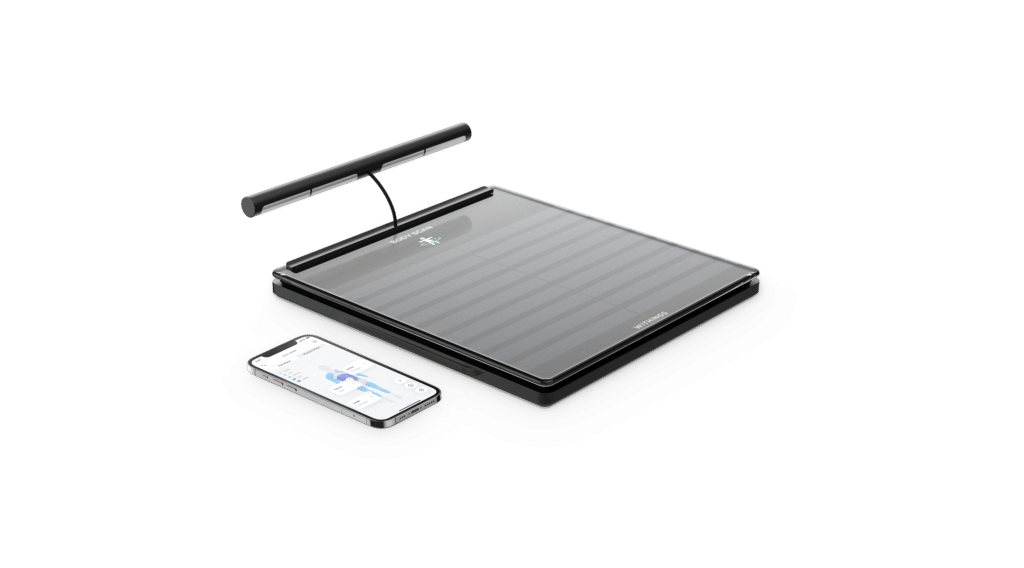 Withings is no stranger to the smart scale, having been one of the pioneers back in the day. Today, the Body Scan is taking that a step further. The Body Scan tracks not only weight, but segmental body composition, heart rate, and vascular age. It can even monitor nerve activity and heart rhythm, thanks to a 6-lead ECG. That starts to move into some territory that usually costs quite a bit at the hospital, and considering this can be linked up with your doctor to make sure they’re updated about your health status, it might be a good thing for a lot of folks to have. For their part, Withings uses all that data to look for signs that could point to more serious underlying health problems, giving you and your doctor advance notice. 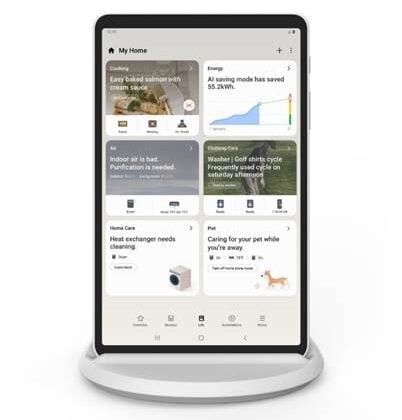 Now that Samsung has turned just about every home appliance into a connected, smart appliance, it only makes sense to tie them all together. The Home Hub is a tablet with a simplified interface dedicated to controlling a number of smart home devices, giving you an at-a-glance view of the home. It is also, to hear them tell it, the future location where the all-binding Chore List, that which must never be ignored, is to be found.