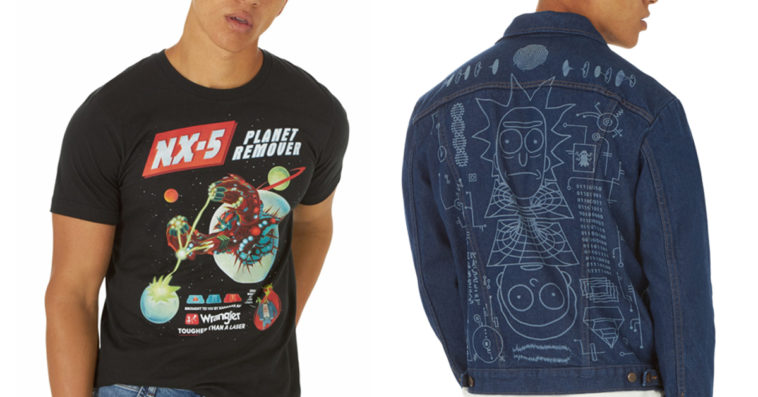 A joke about Wrangler in the season 4 finale of Rick and Morty has inspired a clothing line.

The iconic global denim brand revealed on Tuesday that it has teamed up with the Emmy-winning sci-fi cartoon for a special apparel collection that includes a custom-designed laser-etched denim jacket and an exclusive t-shirt featuring the NX-5 Planet Remover that debuted in the show’s season 4 finale. In the said episode, titled Star Mort Rickturn of the Jerri, the Wrangler-sponsored NX-5 Planet Remover destroyed everything but Wrangler jeans.

The Wrangler x Rick and Morty Men’s Laser Denim Jacket might look just like a classic cowboy cut jacket from the front, but the back features a custom, lasered design of the titular duo. Selling for $79, this piece of outerwear makes a great gift for an avid Rick and Morty fan. 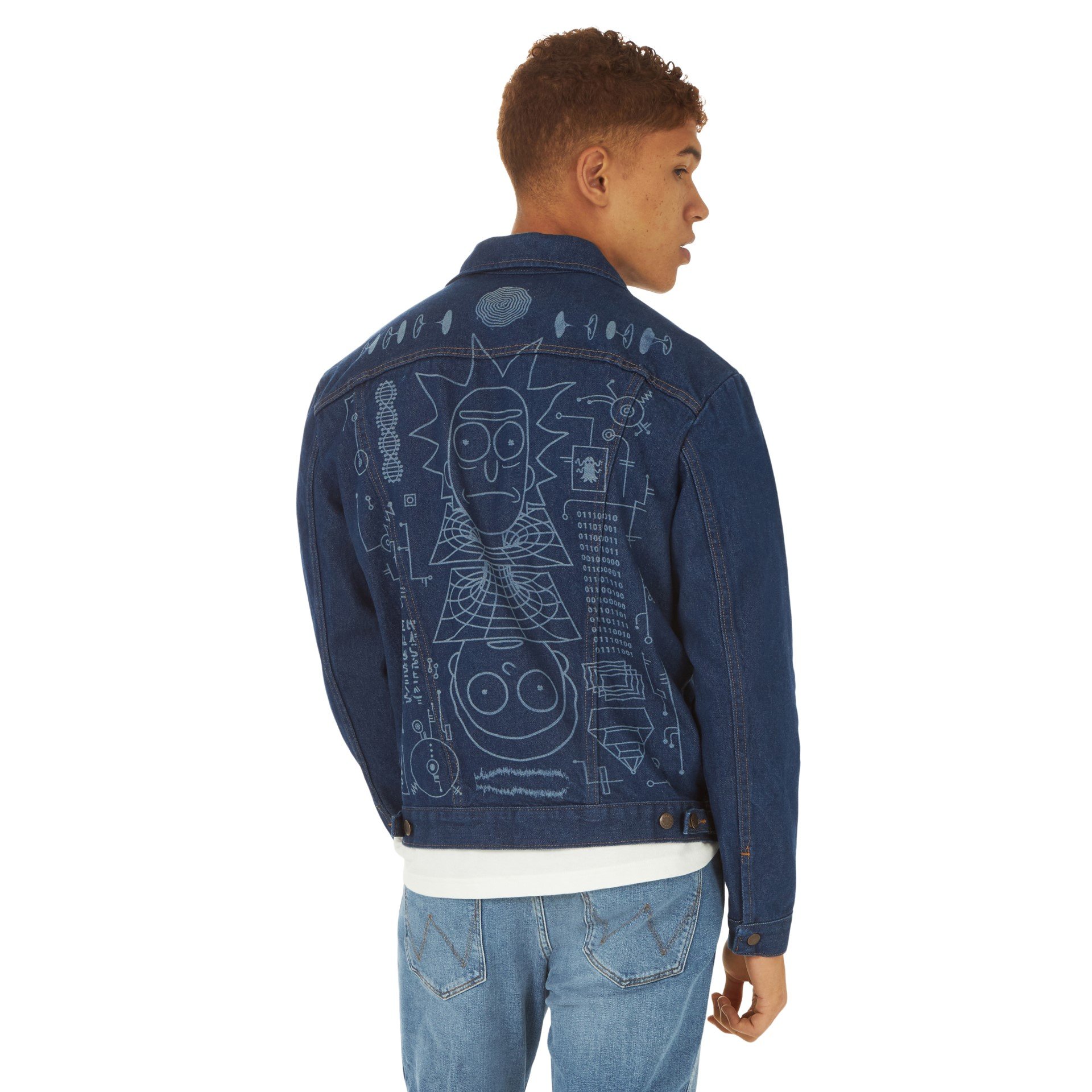 The Wrangler x Rick and Morty Men’s Laser T-Shirt, meanwhile, features a bold graphic print of the NX-5 Planet Remover in action, along with the claim that the gigantic laser has “zero built-in fatal design flaws,” and a reminder that it was sponsored by Wrangler. Made with 100% cotton, the $29 tee is breathable and comfortable to wear all day long. 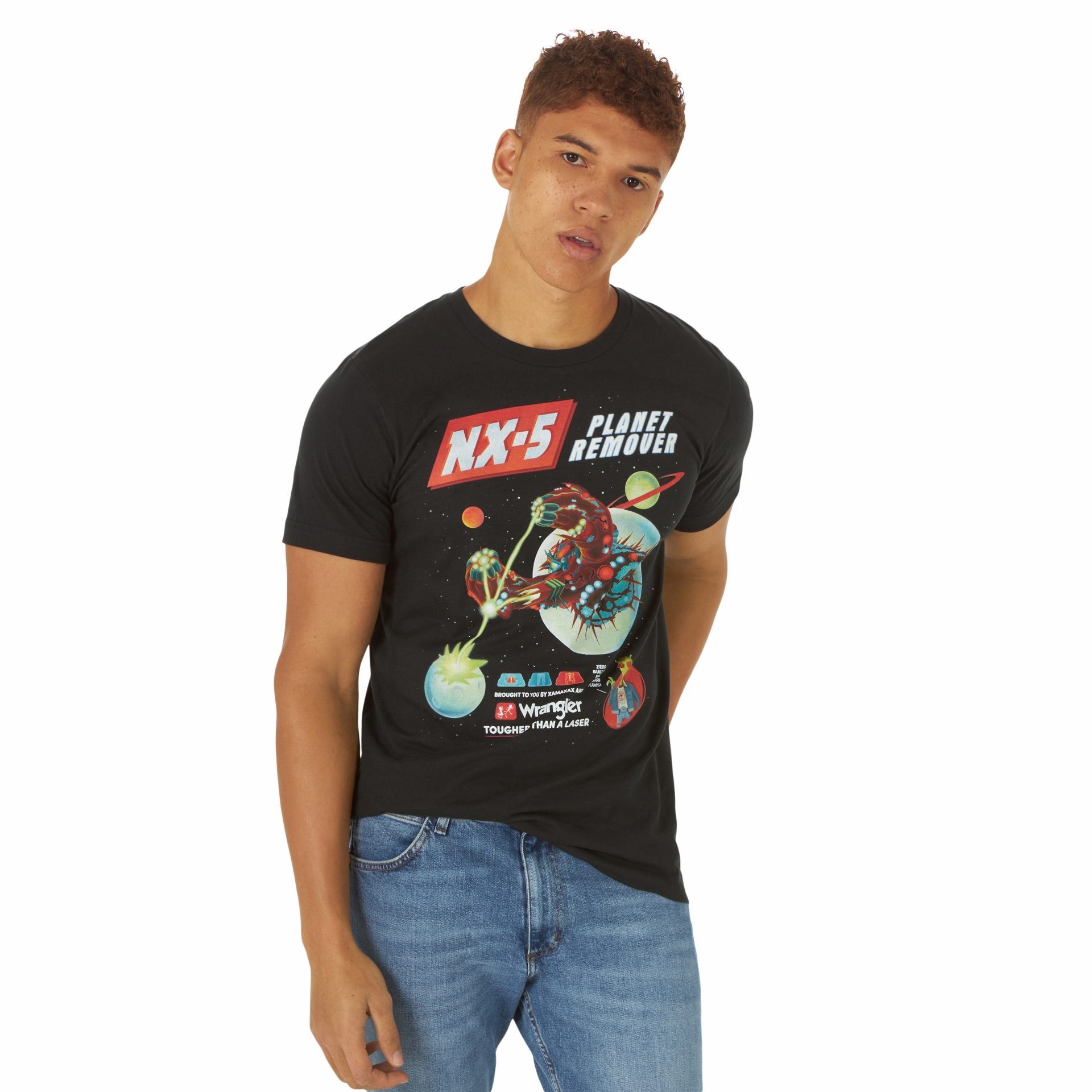 The graphics featured in the jacket and t-shirt were created by the Rick and Morty creative team and brought to life by Wrangler’s design team. Both the jacket and the t-shirt are now available to purchase on the Wrangler website.

“Wrangler has always embraced pop culture as a way to reach new fans, and when we were organically part of the season 4 finale episode, it was the perfect opportunity for us to explore a larger partnership with Adult Swim,” Holly Wheeler, vice president of global brand marketing at Wrangler, said in a statement. “The collection is a direct play on the finale and inspired by the laser that was fictionally ‘sponsored by Wrangler’ in the show. We loved the tongue-in-cheek joke since lasers are actually a big part of our denim production – from digital wash applications to onsite customer customization with our nano-laser. The collaboration was a fun and natural way for us to do something authentic with our brand that joins in on the joke.”

Tricia Melton, chief marketing officer of Warner Bros. Kids, Young Adults and Classics, added that “building innovative partnerships with iconic brands like Wrangler is a priority for Adult Swim and their heroic appearance in Rick and Morty created a new opportunity.”

This isn’t the first time a Rick and Morty reference has inspired real-life commerce. As fans can remember, a 2017 joke about Rick looking for McDonald’s long-gone Mulan-inspired Szechuan sauce actually led to the fast-food chain bringing the sauce back after nineteen years.

First introduced in 1998 as part of a promotional tie-in with the animated Disney movie Mulan, the McDonald’s Szechuan sauce was developed to resemble authentic Chinese Szechuan sauce. Packets of the sauce were originally included with Chicken McNugget Happy Meals and came with one of eight Mulan children’s toys. When the Mulan promotion ended, the Szechuan Sauce was seemingly gone for good, until it made an unexpected resurgence in pop culture almost 20 years later after it was featured in the Season 3 premiere of Rick and Morty.