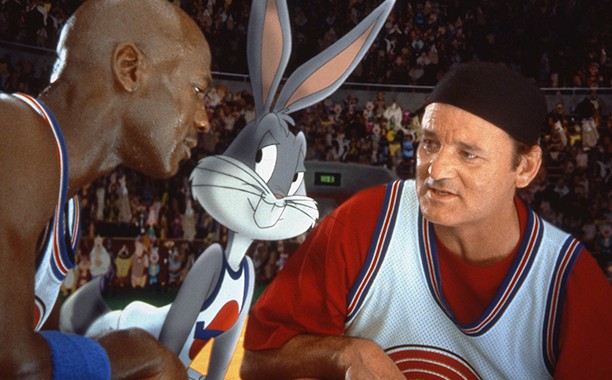 If you’re on a quest to watch ’90s movies for a blast from the past, you are most likely wondering where to watch the original Space Jam.

back in 1996, the hybrid live-action and animated film brought the best of the NBA and Looney Tunes together, giving us a cinematic experience that we never knew we needed. It’s basketball and Bugs Bunny together, an undeniably entertaining combo that got the whole family smiling from ear to ear.

Whether you’re in the mood to re-watch this adventure or are watching it for the first time, you are about to discover where to watch Space Jam!

Is Space Jam on Netflix?

Yes, you can watch Space Jam on Netflix in the U.S.

Can I watch Space Jam on Disney+?

Unfortunately, Space Jam is not available for streaming on Disney+. It is also unlikely that it will ever be on Disney+, as the franchise is owned by Warner Bros. Indulge in some '90s nostalgia with the iconic 1996 live-action and animated film, Space Jam on Amazon Prime.

No, Space Jam is not available on YouTube. However, you can rent or purchase Space Jam: A New Legacy, the sequel to the 1996 movie on YouTube.

Are there 2 Space Jam movies?

Yes, there are 2 Space Jam movies. The first one premiered in 1996, and it took about 25 years before a sequel was released. The follow-up film was released in 2021 and is titled Space Jam: A New Legacy.

While Space Jam: A New Legacy has often been dubbed a standalone sequel, it presents itself as more of a remake of the timeless sports movie. To that effect, Michael Jordan was the star of the first film, and LeBron James takes up the iconic starring role in the 2021 film. Ultimately, based on Space Jam: A New Legacy’s storyline, its premise is pretty similar to its predecessor, and the film presents itself as more of a remake than it is a sequel.

Is Space Jam 2 on Netflix?

Unfortunately, Space Jam 2 is not available on Netflix. However, if you were wondering where to watch Space Jam (the first movie in the Space Jam franchise), Netflix has you covered.

Will there be a Space Jam 3?

At this point, there is no official announcement from Warner Bros. regarding a third Space Jam film.

Space Jam kicks off in 1973 when a 10-year-old Michael Jordan tells his father about his dreams of becoming a professional basketball player in the NBA.

Fast forward to about 20 years later, and Michael Jordan announces his retirement from basketball and ventures into a baseball career.

While all that unfolds on Earth, something brews in outer space as well. The amusement park, Moron Mountain has hit a slump. In an attempt to revive it, Mr. Swackhammer, the park’s owner, commands his minions to search for the Looney Tunes on Earth. Once they arrive on Earth, they hold the animated characters we all love, captive.

Bugs Bunny, being the cunning rabbit that he is, challenges the minions, also known as Nerdlucks to a basketball match to have a chance to defend themselves. While their small stature may make them look like they are at a disadvantage, their powers make up for it. Absorbing the powers of pro basketball players to transform into the Monstars, the Tune Squad needs to call in the cavalry…Michael Jordan.

A nail-biting basketball game ensues, and the outcome would decide the fate of the Looney Tunes and the legendary NBA player. Will the good guys win and retrieve the stolen basketball talents or will Michael Jordan and the Looney Tunes become attractions at Moron Mountain?