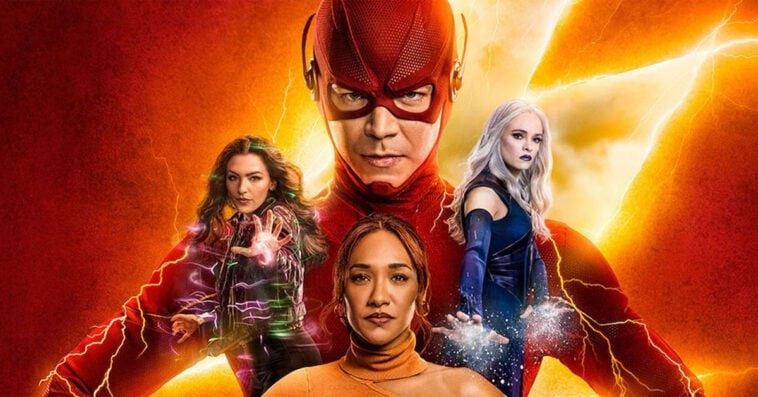 The Flash season 8 has arrived on Netflix.

The latest season of the superhero series premiered on November 16th, 2021 and aired its finale on June 29th, 2022 on The CW.

Just a week after wrapping its broadcast-TV run, The Flash season 8 made its Netflix debut, joining the previous seven seasons of the show on the streaming service. The show’s latest batch of episodes has been available for streaming on the platform since July 7th, 2022.

The season started with the abovementioned Armageddon, a five-episode crossover event that saw Barry (Grant Gustin) facing the possibility that his actions would bring about the end of the world. The well-paced story arc featured appearances from fan-favorite characters from other Arrowverse series, including Arrow, Supergirl, Legends of Tomorrow, Batwoman, and Black Lightning.

Without giving away too many details, the rest of the season mostly saw Team Flash trying to cure Iris’ (Candice Patton) time sickness, while also dealing with threats like Deathstorm and the team’s most devastating loss yet.

In addition to Gustin and Patton, the main cast of the season also includes Danielle Panabaker as Caitlin and Frost, Danielle Nicolet as Cecile, Kayla Compton as Allegra, Brandon McKnight as Chester, and Jesse L. Martin as Joe.

As previously mentioned, several actors from other Arrowverse series guest-starred in the season. These include Brandon Routh as Ray Palmer, Chyler Leigh as Alex Danvers, Cress Williams as Jefferson Pierce, Javicia Leslie as Ryan Wilder, and Katherine McNamara as Mia, just to name a few.

To get a glimpse of the latest season, watch the trailer below.

Will there be a season 9 of The Flash?

Yes. The Flash was renewed for season 9 on March 22nd, 2022, making it the longest-running series in The CW’s Arrowverse.

When is The Flash season 9 coming out?

The Flash season 9 doesn’t have an exact release date yet. But the show won’t return until 2023, premiering at midseason rather this fall.

What will happen in The Flash season 9?

Plot details on The Flash season 9 are being kept under wraps, but showrunner Eric Wallace said that the objective for the next season is to “up the romance.”

“One of the goals for next year is to have maximum fun and up the romance,” Wallace said in an interview with ComicBook.com in June. “That’s something I’m looking forward to. In season 9, the crisis is gone, and Barry and Iris can be back together full time, so bring on the sexy.”

Wallace went on to tease that season 9 will have a romantic comedy vibe. “I do love a good rom-com,” he said. “People think I just love horror movies. Literally, my second favorite genre is romantic comedies. So, who knows? Maybe we’ll get a little bit of that next year. Wink, wink, nudge, nudge.”

Is The Flash season 9 going to be the final season?

When asked by TVLine if The Flash season 9 will be the show’s swan song, Wallace said: “I still do not know. I do not know. I hope it’s not. I’ve got plenty of plans. The first three seasons [I was showrunner], 6, 7, and 8, really is [sic] one big omnibus. And that whole story is now done. I’m now formulating a new, shorter, two-season plan, for Seasons 9 and 10, so I sure hope I get to tell that story because I know where I’m driving to.”