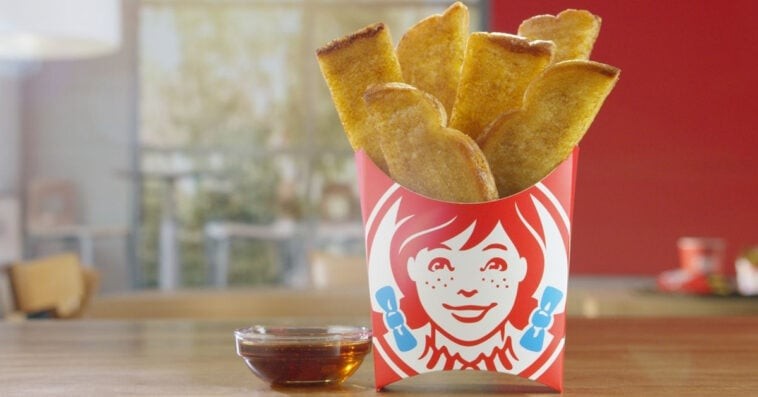 Breakfast at Wendy’s has just gotten sweeter with the launch of the fast-food chain’s new Homestyle French Toast Sticks.

Now available in all Wendy’s locations across the United States, this latest addition to the restaurant’s breakfast menu delivers a mouthful of flavor striking the perfect balance of a soft, custardy interior and crisp, golden-brown crust with delicious notes of vanilla. Each order of these sticks comes with a new dipping sauce or syrup to complement the menu item’s flavor profile.

These sticks are the first sweet addition to the chain’s breakfast menu since it launched in March 2020, a few weeks before the COVID-19 pandemic overtook the U.S. Prior to the arrival of this new breakfast option, the chain’s morning offerings were mostly savory items, including the Breakfast Baconator and the Hot Honey Chicken Biscuit.

“We are always looking at new ways to deliver high-quality, craveable, and affordable breakfast offerings,” said John Li, Vice President of Culinary Innovation at Wendy’s, in a press release announcing the new item. “The Homestyle French Toast Sticks play into sweetness – a space we’ve mastered– to balance out our savory morning flavors. The piping hot pillowy French Toast Sticks and golden syrup dip are the perfect way to take your breakfast game to the next level.”

Carl Loredo, Chief Marketing Officer at Wendy’s, added: “Our Homestyle French Toast Sticks strike a perfect note of nostalgia and bring even more morning flavor to our menu – this time with something sweet. From day one, we launched our breakfast offering to save fans from the boring and bland morning options that exist at some of our competitors, and we’ve done just that. Wendy’s all-new Homestyle French Toast Sticks give our fans a better breakfast worthy of their first meal of the day.”

In a separate interview with CNN Business, Loredo said that the sticks’ portability played a “giant role” in their addition to the chain’s menu. While Wendy’s breakfast menu has been performing well, the news outlet reported that the chain’s earnings from breakfast haven’t been enough to increase sales significantly in recent months. CNN Business noted that adding the fluffy French toast sticks ahead of the back-to-school season could help boost Wendy’s overall sales.

According to Wendy’s, these French toast sticks are made with real eggs and dipped in milk custard. Though the chain didn’t specify whether these are made in-house or are pre-made and shipped to Wendy’s locations frozen, Dane Rivera, who wrote a review of the new breakfast item for Uproxx, assumed that it’s the latter.

“All I’m getting from these sticks is a stale blandness,” Rivera wrote of Wendy’s Homestyle French Toast Sticks. “It’s like eating really sweet cardboard. I’d be very surprised to find out that these things are made in-house, my assumption is that they’re pre-made and shipped to Wendy’s frozen. I don’t know if that’s true, but that’s what it tastes like.”

Rivera, however, pointed out that the taste of the sticks gets better once they’re dipped in the syrup, which is basically just a mixture of corn syrup and brown sugar. “The vanilla and maple notes come to the forefront and it works as a great distraction for the dryness of the French toast itself,” explained the food reviewer. “Still, it’s a bit too sugary sweet to really enjoy. With the syrup, this is sweeter than any French toast I’ve ever had, including the stuff that’s smothered in berries, whipped cream, and brown sugar.”

Yes. Sonic serves French toast sticks. The chain’s take on the popular breakfast option is described as “four thick, golden French toast sticks that are served warm with maple-flavored syrup for dipping.” An a la carte order costs $2.49, while an order with a drink costs $3.49. These microwaveable French toast sticks are a convenient breakfast option. These frozen treats are a good source of protein and are made with wholesome ingredients topped with cinnamon sprinkles.

What are other breakfast options on Wendy’s menu?

In addition to the newly launched French Toast Sticks, the breakfast menu at Wendy’s also includes a wide variety of sandwiches, croissants, and biscuits. The chain also offers homestyle potato fries, cold brew, and even a baked bar. Wondering which of these breakfast basics is the best? Below are some of the fan favorites according to EatThis and Restaurant Clicks:

What is Wendy’s biggest breakfast sandwich?

The Breakfast Baconator is considered the biggest breakfast sandwich on Wendy’s menu. The breakfast version of the chain’s iconic Baconator, the Breakfast Baconator is made with grilled sausage, melted American cheese, crispy Applewood smoked bacon, a fresh-cracked free-range egg, plus more cheese and more bacon all covered in the chain’s signature creamy cheese sauce. Made for bacon lovers, a combo order of this breakfast burger costs $7.09.

What is the healthiest Wendy’s breakfast?

The classic Bacon, Egg & Cheese Biscuit is the healthiest breakfast menu item at Wendy’s. Priced at $3,99, the biscuit clocks in at just 320 calories per serving, making it the lowest-calorie breakfast option at the restaurant chain.

Does Wendy’s make a breakfast burrito?

Does Wendy’s use real eggs in its breakfast menu items?

Wendy’s only uses fresh-cracked, Grade-A eggs on its breakfast sandwiches. According to the chain’s website, the company’s U.S. egg suppliers are required to have independent, third-party audits conducted annually by auditors with PAACO (Professional Animal Auditor Certification Organization) certifications.

Does Wendy’s have coffee in the morning?

When did Wendy’s start serving breakfast?

Although Wendy’s first foray into the breakfast game failed, the chain’s return to the morning category has been much better than the first time. In a November 2022 report, QSR Magazine pointed out that Wendy’s morning daypart is nearing $3,000 in average weekly sales per unit, the chain’s 2022 year-end benchmark.

This year’s success of Wendy’s breakfast menu is largely due to the consumers’ warm reception to the abovementioned Homestyle French Toast Sticks. Launched in August 2022, the menu innovation is now the chain’s No. 1 selling breakfast item. Wendy’s CEO Todd Penegor said that the amazing French Toast sticks drove “meaningful acceleration” in the company’s U.S. breakfast sales in Q3, noting that the customer response to the new breakfast option has been “overwhelmingly positive.”

What is Wendy’s famous for?

While Wendy’s breakfast menu has been consistently attracting customers, the chain is more famous for its square hamburger patties made of fresh beef and served on circular buns. The restaurant is also famous for its sea salt fries and the Frosty, which is a form of soft-serve ice cream mixed with starches.

What kind of cheese sauce does Wendy’s use?

What types of nugg sauces does Wendy’s have?

What types of salad dressing does Wendy’s have?

How many Wendy’s are there in the U.S.?

How many Wendy’s are there in the world?

Wendy’s is an international fast-food chain. Aside from the U.S., Wendy’s has locations in North America, Asia, Europe, and Oceania. As of May 2022, the restaurant chain has approximately 7,000 locations worldwide.